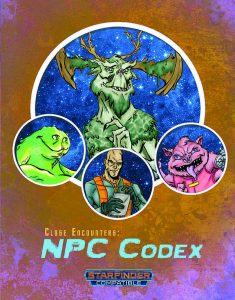 This book contains 8 characters intended for general use, and 5 custom characters, so let’s take a look at the general use characters first, shall we? Structurally, we get a plethora of different builds for various CRs – CR 1, 3, 5, 7, 9, 11, 13, 15, 17, 19, so quite a bunch of builds for each character. For the general use NPCs, the integrity of the statblocks is very important, obviously. Unfortunately, this is where this book falters. On a cosmetic angle the first two lines of the statblock (denoting gender + species, alignment, type, etc.) are missing from all but the first of the statblocks. Indeed, in a really annoying angle, all but the first statblock tends to be cut down to bare minimums, which don’t include e.g. speed (which is VERY important in SFRPG). While this triggers my OCD to no end, it’s most assuredly a factor that can be ignored if the statblock utility is up to par, right?

Well, there are a couple of other issues with the stats, and these, alas, are more poignant. There are quite a few instances where base arrays have not been consequently used, mixing and matching, for example, the values provided by expert array and spellcaster array. Race/class graft interaction also tends to be rather weird and inconsistent, and e.g. the hacker is missing the plusses for the (sometimes incorrect) skill values, instead putting the values in brackets. The whole array of the hacker statblocks do not feature the correct (good) skill values for Perception in the senses line. More egregious: What about spellcaster builds that only list the base spell DC and fail to add the spell levels properly? We have operatives sans the proper initiative boosts, and the truncated statblocks also mean that the speed enhancement is missing. Skill bonuses? Nope. The special abilities are all crammed into one header, instead of being properly integrated into the statblock.

So yeah, unfortunately, the mechanical flaws in the builds severely compromise this entire supplement, and the puzzling decision of these truncated statblocks renders using them hard, even for people who don’t care about mechanical issues.

Indeed, if anything, the entire book feels woefully rushed in a plethora of ways, and in a manner, that’s a pity, for there are these small touches that show that the team cared. We have a plantlike dragon template graft (with a header not properly bolded); but on the downside, we have improperly formatted spells and needlessly untyped bonuses here. Ironic: The new graft hasn’t always been implemented properly. The builds consistently fail to properly situate abilities where they belong in the statblock. And this is heart-rending, for the little details show some passion: When hackers at high levels gain an ability to represent how caffeinated they are, you have to smile. When you get essentially a transformer NPC, that’s neat to see; a professional fighter/big game hunter skittermander? Those are cool concepts, illustrated in a rather neat manner. A sentient ooze named Bleeb Glolump? Cool! The sentient hive turned DJ? Awesome. The concepts for the named NPCs herein are great; however, they are compromised by both the mechanical hiccups and the utterly puzzling decision to cut their statblocks down to a level that is no longer comfortable or convenient to use.

Editing and formatting are not good; there are several formal glitches, math not checking out, as well as cosmetic hiccups. Layout adheres to a nice two-column full-color standard, with colorful artworks provided for each character. The pdf has bookmarks, but the bookmarks are nested in a weird way: “Introduction” is the header for the first character, who is the header for the second character, etc., until we are 4 sub-levels deep. Yet another indicator of a rushed release.

Ben Dowell’s NPC Codex is a supplement that really needed a second pass by the author; the puzzling decision to cut away vital parts of the statblocks eliminates immediate utility even for those tables that can look past the plethora of errors in the statblocks, and there are so many basic snafus in the stats that I can’t really recommend this pdf. At one point, I had a running list of issues, but I ended up deleting it; it felt like bullying/dissection, rather than criticism. Suffice to say, this has a ton of issues.

I like the concepts for the named NPCs and their little touches, but for a utility-focused book such as this, that does not suffice. My final verdict can’t exceed 1.5 stars, rounded up due to in dubio pro reo.

If you still want to check out these NPCs, you can do so here.