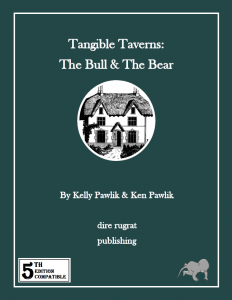 This installment of the Tangible Taverns-series clocks in at 14 pages, 1 page front cover, 1 page editorial,1 page foreword, 1 page SRD, 1 page of advertisement, 1 page back cover, leaving us with 8 pages of content, so let’s take a look!

This review is based on the revised version of the tavern and was designated as a prioritized review by my patreons.

All right, so, the tavern does feature paraphernalia galore, representing the two eponymous animals, but just short of being cluttered. Patrons frequenting the establishment are scrutinized by two guards – Evie, a young human female, and Durgul, a similarly young half-orc – while flirtatious, they both are actually pretty devoted to one another. Food and beverages served are surprisingly healthy and delicious, though, unlike later installments of the series, we do not actually get a proper menu. The second story of the establishment does btw. contain a discreetly-run brothel.

Really nice would be the rather detailed 8 rumors and 8 sample events featured here for the tavern – an obvious hyperlink here is unfortunately dead. The NPCs that make this place come alive feature btw. an elven, peg-legged, but pretty attractive and cool lady/pirate turned bartender – her stats in 5e are lovingly handcrafted and the lady actually is a REALLY fast climber and swimmer…and if she can swing on chandeliers etc., she’ll deliver pain…don’t underestimate this lady!! The pdf also features a fluff-only write-up for the head chef Louisa, the madam, as well as 6 further, nice NPCs. Disappointing: Neither the kitsune geisha, nor the ifrit lady has been converted to 5e- this takes a significant factor out of the proceedings and relegates them to fluff-only.

The two guards mentioned before, on the other side, have been converted to 5e: Evie can take an additional action and heal herself, with rests to recharge, while Durgul gets better hits versus grappled foes, better crits and is an expert barroom brawler. The duo should definitely not be underestimated! If you’re comparing this directly to the PFRPG-version, I should note that we get only one iteration of the duo for 5e – while that iteration is cooler than the PFRPG-versions, it’s still 2 versions of the duo less.

It should be noted that the nice b/w-cartography for the place is player-friendly. Big plus there!

Editing and formatting are very good, I noticed no significant hiccups here. Layout adheres to Dire Rugrat Publishing’s printer-friendly 2-column b/w-standard and the pdf comes with solid b/w-artworks. The pdf comes fully bookmarked for your convenience and the cartography in b/w is nice for such an inexpensive file. While it does not sport a scale, the default can probably be assumed.

Kelly & Ken Pawlik’s Tangible Tavern series has come a long way since its humble inception; comparing this to the more recent additions to its canon does illustrate that fact rather well. “The Bull & The Bear” is not a bad tavern and it can be inserted rather easily into any given city, but at the same time, it is less special, less unique than later offerings. The dynamics of the NPCs are fun and so is the dressing – but as a whole, the place remained pretty pale to me, never really coming alive to the same extent that the other, mostly absolutely excellent installments in the series did. I also expected, to some extent, a fortune/dual-themed or finance-themed angle that never really surfaced here. The 5e-version’s statblocks, as has become the tradition with the series, are pretty nice and lovingly-made.

While I understand the lack of higher-level builds for the two guards, the lack of stats for the other NPCs apart from the barkeep do gall me a bit – which is why this does not score higher than the PFRPG-version. While we get less individual statblocks, I like the ones we do get more. Hence, I will round up from my final verdict of 3.5 stars for this iteration as well.

You can get this nice tavern here on OBS!
Endzeitgeist out.