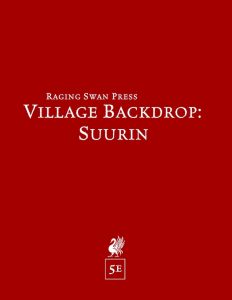 The village of Suurin was once supposed to be an utopian experiment, a place of freedom and peace. Now, the halfling village sports a cadre of hobgoblin enforcers and pretty much everyone suffers from tell-tale black veins (as always, nomenclature and local appearances and dressing habits are covered)…for the little village has been transformed by Devia Brookshire into the Skez capital of the realm, definitely earning the soul-crushing disadvantage that the settlement stats feature. It should be noted that this one does have a market place entry, in spite of this being the 5e-version – you can actually purchase the drug Skez openly in its various iterations. Now there is one thing to note: In all iterations of the village, it seems to be geared primarily towards lower level gameplay – considering that, the DCs for village lore (10, 15 and 20) may be a bit high, but I’m still good with it.

Of course, the big unknown here is Skez and, much to my pleasant surprise, no less than three types of the powerful drug have been provided…and yes, even though this is the 5e-version, the drugs come with proper formatting and delightfully crunchy bits. They make use of 5e’s neat exhaustion-mechanics. While personally, I would have worked with disadvantage versus illusions instead of a -4 penalty in the case of the final drug, that’s a matter of aesthetics.

Jeff Gomez takes us on a trip to an utopia broken by greed, to a pastoral idyll firmly in the grip of the horror of industrialized drug production. The stark contrast between the “good old days” and the tainted reality is intriguing and the fact that even enforcers and the mastermind can be considered to be victims adds another layer of complexity to it. The inclusion of proper rules-representations of the drugs is just a nice icing on the cake. The village itself may have primarily one note, but it is a strong and clear one. I was pretty positively surprised by this one, particularly the fact that the drug-conversion shows more care than what one typically expect, making this pretty firmly entrenched in the system. My final verdict for the 5e-version will hence also clock in at 5 stars.