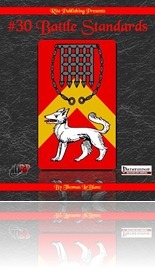 Grivt’s Reserve is a shop of a dwarven merchant and this particular installment uses the frame-narrative to introduce us to an assortment of new types of items:

First are the so-called banners: These items can be carried or planted, but if they’re not carried or the wielder falls, they cease to provide their benefits. It should also be noted that banners need not be carried by the wielder, but can be held aloft by e.g. a cohort etc. – they are linked to the wielder via a specific badge. The pdf offers us two types of banner, the general’s and the strategist’s banner, though these 2 actually contain 4 different variants, enabling e.g. the widespread hampering of verbal communication, reducing the amount of food and army must take in, grant concealment vs. ranged attacks or even prohibit flanking and the use of teamwork feats on behalf of the enemies etc. The banners have in common that they can potentially influence quite a host of allies, add tactical options to characters and even better, enable e.g. prospective PC-generals to add a magical edge to gain the upper hand – or even be adventure hooks themselves: Stealing a nourishing supply banner from a hostile army on the march in a harsh land may make for a pre-emptive strike that calls for an elite cadre of PCs…

The next new item-class will find friends among all the aficionados of mounted combat: The Guidon is essentially a spear or lance with a flag hanging from it. A total of 8 different Guidons are presented, ranging from the ability to add e.g. the celestial/fiendish/resolute/entropic templates to your mount to making allies act on your initiative 3/day and moving up to an ally’s initiative 1/day to a guidon that lets your mount grow black thorns and leave a swathe of sickening pollen – Hell yeah! The imagery is awesome!

Now the next item-class is essentially one of these “D’uhn, why are there not more, can I have 101 of them”-moments, at least for me: Literature and narratives are full of symbolism regarding the effects of flags on morale etc. and the flags herein actually plug some logic holes: Garrison Flags only work when mounted on a structure and rules for increasing the area they protect are featured as well. Barring extra-dimensional travel, making the structure difficult terrain and even adding contagion-effects to them are given as examples – 5 such flags are provided and, as I have said, they do add immensely to a setting’s credibility and coolness – we could use more of them.

Infantry Guidons are next, and essentially, they are a footman’s version of the aforementioned cavalry guidon in the way they work. 5 such guidons are provided, but since infantry works different in warfare, the focus of the guidons is different: Want to e.g. give allies 20 ft. around you a chance to have enemies suffer from a bullrush-attempt and damage them when they strike you? Check out the Blowback Guidon. Or the Plodding Guidon, that hampers escape attempts by both your allies and enemies via spectral ball and chain. Neat and again, cool imagery.

Pennons are smaller banners, the triangular cloth flags attached to the end of a knight’s lance, spear or even quarterstaff. 3 of them are included, though it should be noted that the order’s pennon has different effects depending on the cavalier order associated with it. All the standard orders are covered – well, all but the order of the cockatrice, star, sword and tome – which is a bit of a pity. The Valkyrie’s pennon (3 versions) is another winner, cladding the wearer in magical armor and working better for, obviously, female wielders.

If you’re like me and at least somewhat into Asian cultures, you might be familiar with the next item-class: The Sashimono are small banners mounted on an inverted l-shaped pole and are typically attached to the back of the wielder’s armor. 4 of them are provided and essentially, the way the symbol is painted on the sashimono via calligraphy determines the exact effect of the sashimono – writing e.g delicate on the Aegis Script-sashimono reduces armor check penalty by 3, while writing ornately on it reduces spell failure chance by 10%. What I’m unfortunately not sure about is whether the sashimono can be refitted with other types of symbols. Could one e.g. benefit one day from the fluid benefit and redraw next day in bold? Since the crafting requirements don’t mention differing specifics, I assume this is the case, but am not sure. Anyways, especially if the symbols can be redrawn, rules to properly craft the calligraphy on these banners would also have been helpful.

The final new class of banners would then be the vexillum, a standard for armies on the march which must be wielded in one hand (or similar appendage) and which comes with the unpleasant consequence of a negative level for 24 hours if the flag is lost or destroyed – at least until it is reclaimed. A total of 3 vexillums are provided, from the exalted vexillum that doubles the range of paladin auras and cleric channels to the Inqeryo Pole, which provides you the option to spontaneously convert inflict spell if you can usually only can convert cure spells and vice versa, but at the cost of the converted spells effectiveness. Additionally, the pole provides a continuous deathwatch – great to keep track of the health of nearby creatures.

The pdf also provides a selection of 9 new mundane items, the new flagbearer-feat and full stats of the dwarven cavalier-turned-expert Grivt Lungpiercer (CR 8, btw.), but not of Grivt’s mount.

Editing and formatting are very good, I didn’t notice any significant glitches. Layout adheres to Rite’s full-color two-column standard. There are some pieces of artwork herein, though none wowed me, I didn’t expect them to do so at this price-point. The pdf comes fully bookmarked, which is always nice to see in rules-centric books.

I’ll just get right to it: I love the magical banners herein, I love the idea, the tactical options, the imagery, the option to fight heated battles for banners and especially the banners and garrison banners are plain awesome – in fact, I consider all of the new item-classes to be able to carry their own #30- or even 101-pdf and honestly, I can say that I want more of them in the future. However, not all is well: The Sashimono need an explanation on how they are supposed to work – as written, I can’t figure it out. Author Thomas LeBlanc has done a great job indeed and this pdf would usually be a good contestant for 5 stars + seal of approval, were it not for this flaw. For now, I’ll settle for “only” a verdict of 4.5 stars, rounded down to 4 and hope this pdf gets a clarification.

#30 Battle Standards is available from: