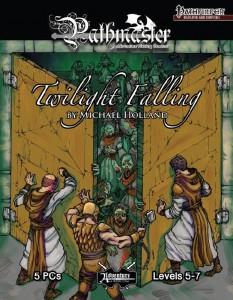 This module is 39 pages long, 1 page front cover, 1 page editorial, 1 page ToC, 3 pages of advertisement, 1 page SRD and 1 page of back cover, leaving us with 31 pages of content, so let’s take a look!

This being an adventure-review, the following review features quite a few SPOILERS. Potential players may wish to jump to the conclusion.

Still here? All right! The town of Crepus was once known for being the base of the Red Hand of Ghulooti-Huul and while they had to go underground, the aftermath of their influence gave rise to a two-class-society between the ruling “Circle” and the servant-class called “Companions” after the moniker once provided by the erstwhile masters. collecting the souls of the dead in a pocket dimension called the “Twilight Hold”, the circle banned arcanists (the exiles founding the “Sanctuary of the Golden Dawns” and established a religion based on feeding souls to the dimension, reverence of the dead becoming a crucial part of life in Crepus. As an accompanying effect, a kind of racism crept into the settlement – “homogenous” souls proved more fertile for the means of drawing power from them and hence, a seamstresses’ sin of conceiving a child born from an elven father, once discovered, led to a swift trial. Guided by anger over his mother’s death and the whisperings of Morvus, an agent of the Red Hand, chaos is about to return to Crepus.

Or rather, has already returned: Via the half-elven boy’s extensive knowledge of Crepus’ layout, Morvus has spread zombie rot throughout the city and plans to wrestle control of the Twilight Hold and the power it contains from the circle via a complex ritual. It is into this chaos and plague zombies hunting people in the streets that the PCs enter the fray: After saving some citizens from rampaging undead, one Captain Kellis admits to the severity of the situation and a Septarch confirms in a meeting the situation: Not only are the undead an issue, their souls do not pass to the Twilight Hold, destroying them also endangers the integrity of the pocket dimension, so herding is preferable.

Investigation of the culprits send the PCs towards the sanctuary, where one cool peculiarity awaits – group skill-checks, i.e. simple skill challenges where the whole group’s successes determine over the (optional) successes at doing proper legwork. Sooner or later, the PCs will ferret out a man admitting to cooperating with the Red Hand -albeit unaware of the true extents of the Red Hand’s depravity.

It is thus the PCs are pointed towards the Necropolis where the remains of the honored are interred:

Here, they may take Garrett, the misguided half-elven youth ostracized by his bigot home and take him prisoner while preventing the poisoning of the town’s water supply. Returning to the portico and inner sanctum of the Circle, the PCs find things escalating and not under control – exploring the dungeon, now populated with undead firm under the control of the Red Hand, the PCs will be hard-pressed to foil the plans of Morvus.

Special mention deserves the fact that failed skill-checks, for example, come with their own read-aloud checks here – as do successful ones. Nice for DMs not as confident. The module comes with 2 pages of player’s handouts and a player-friendly 1-page map of the sanctum.

Editing and formatting are very good, I didn’t notice any significant glitches. Layout adheres to its own, beautiful two-column full color standard and the pdf comes with gorgeous full color artwork as well The cartography, also provided in full color, is nice. The pdf comes fully bookmarked for your convenience.

This module I was most skeptical of among the pitches – little did I realize how well author Michael Holland would do in weaving a believable microcosm of moral shades of gray in this module. Contrary to what I believed originally, “Twilight Falling” actually manages to cram the unique village AND a module into the few pages allotted – a prime example of effective, concise writing. That being said, this module also feels like it would have worked better as a mega-module rather than a short module: With a gazetteer of the town, a map of it and some set up, the escalation of the red hand’s sabotage would have made for one damn cool apocalyptic “Walking Dead”-like scenario with the appropriate drama etc. – preferably after setting up the NPCs with their flaws etc.

In the format provided, this module does its task exceedingly well, though I honestly wished the Michael Holland had instead used another set-up and left this one for a longer, more complex type of module to develop – as written, much like the 32-page Paizo-modules, this module is iconic, cool and fun – but also leaves me wishing it had more space to develop and expand its ideas. Suffering a bit (though much, much less than I anticipated and almost imperceptibly so when compared to e.g. “Curse of the Riven Sky” -a and check out the name of the author of that one!) from its brevity, I feel confident in rating this 4.5 stars, rounded down to 4 for the purpose of this platform. I hope to one day see more of Crepus!