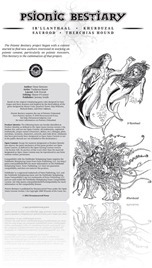 This pdf from DreamScarred Press is 6 pages long, 1 page front cover/editorial/artworks (which are repeated in the respective entries), 1 page SRD, leaving 4 pages for 4 monsters, so let’s check them out!

The first creatures are the so-called Ir’Llanthaal, CR 3 merfolk-like beings with sound-creating abilities as well as an affinity to dolphins and whales. Especially for e.g. Alluria Publishing’s Cerulean Seas campaign setting very cool – I’m looking forward to reading their book on underwater psionics.

After that, we get the CR 6 Khurduzal, the so-called ID shambler is much more interesting: The strange plant cannot only engulf and constrict foes, it is also resistant to psionics and draws strength from powers of the mind hitting it. Furthermore, via its mushrooms, it emits constantly a strange kind of psychotropic aura. This being is so awesome – details like the mushrooms growing on this mass being able to be made into a drug add further to the critter’s awesomeness. I just wished that stats for the drug had been provided as well…

The third creature then would be the CR 8 Saurood, a triceratops-headed humanoid can be considered an homage to Forgotten Realm’s Saurian leaders, who were known to be contemplative, yet physically imposing. This being can use psi-like abilities that duplicate hammer and stomp as well as being able to emit a devastating sonic bellow. Neat take on the “good” reptilian race. Fans of the Third Dawn-setting should also enjoy the link of the race’s fluff with the ophidians.

The final new critter, the Thercias Hound clocks in at CR 6 and should be considered a six-legged canine being with a powerful bite, predatory psionic powers like chameleon and a hide that makes it naturally invisible and a nice deadly hunter in the tradition of the good old displacer beasts.

Editing and formatting are top-notch, I didn’t notice any glitches. Layout adheres to a printer-friendly 2-column standard and the b/w-artworks provided for the monsters are original and nice. The pdf has no bookmarks, which is a minor bummer at this length.

Following the tradition of the psionic bestiaries, the creatures herein can be considered high-quality critters, with this installment feeling distinctly like a grand homage to monsters of old that have been absent to one reason or another. The monsters herein all have some kind of signature ability and seem to fill their respective niches. On the other hand, while this closeness to classics makes them feel nostalgic, they could, with the exception of the stellar ID shambler a tad bit more originality. Usually, this wouldn’t bug me that much, but due to e.g. the fact that the drug-information is missing as well as the fact that the Ir’Llanthaal could be a tad bit more original, I’ll settle for a final verdict of a solid 4 stars – a good mini-bestiary at the low price.