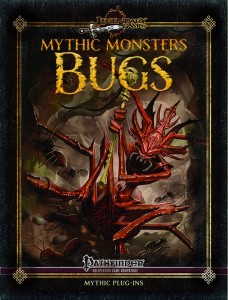 As always with the mythic monster-series, we begin this pdf by taking a look at the introductory supplemental content -this time, a total of 8 mythic feats – which are necessary. Why? Simple: Most vermin are mindless and as such, are pretty limited in their options. Since most mythic feats are upgrades of regular ones, this presents a challenge – the pdf aptly thus points its customers to the neat installments on Molds and Oozes, Too as well as providing new fodder – e.g. a feat that allows creatures with snatch and/or grab to carry off foes, a feat-chain based on essentially gaining a threat-range for combat maneuvers (for particularly devastating grips), smashing stomps and senses that enhance tremorsense – these feats imho are pretty much crucial for the things to follow, so take heed and read them carefully!

A design-challenge beyond the one above would be one for function – insectoid creatures are not particularly trick-overloaded; instead,, they are about functionality – and CR 4/MR 1 ankhegs, one of my favorite creatures, begins right at the get-go with something beautiful (no, not meaning the cool artwork!) – I’m talking about the ability to generate caustic quicksand. Oh, and the creature gets an impressive ability that lets it drag creatures into tunnels AND collapse the tunnel afterwards. Yes, this is as story-enabling as it sounds. AWESOME and quite frankly one of the best low-CR designs in the whole series!

Giant Ants come fully depicted (with a great artwork) – the default is CR 3/MR 1 and variants for worker, drone and queen modifications are provided in abbreviated forms as well and their crushing mandibles are neat indeed – great if you want a hard mode for Frog God Games’ excellent “Of Ants and Men”-module in Quests of Doom. Want an army ant swarm instead? Well, this one swarms into your mouth and nose and chokes you! Fireball? The swarm can disperse and reassemble, granting itself evasion? No fireballing these guys… And you thought the regular one was nasty…

The CR 5/MR 2 aranea not only gets better shapechanging, they may also fluidly apply their poison to blades and can go all spiderman on their foes – essentially, the get some deed-like powers predicated on them using webs. Once again, an absolutely inspired mythic upgrade! CR 3/MR 1 Cave Fishers, the classic ambush predators of the underdark gets a secondary filament, making the creature essentially a more powerful version of the basic creature – especially due to the significantly upgraded maneuver-prowess, which makes this creature much closer to what it ought to be able to do.

Centipede Swarms at CR 5/MR 2 gets better poison may expand itself and generate unstable terrain – awesome one! The beautifully-rendered drider (CR 8/MR 3) may drider-ify non-drow via mythic power and vomit forth spider swarms. The lavishly-rendered Formian Queen (CR 21/MR 8 – see the cover for a smaller version of the superb 1-page artwork) can establish life links with up to seven creatures, establishing a broodguard that protects the queen and makes her a powerful foe worthy of her boss status -oh, and yes, she knows their status and can call her guard to her. She can also whip her whole hive into a deadly frenzy and grant her children a selection of mythic templates via mythic power. She can also enter a stasis, travel the space between worlds and unleash devastating shockwaves of telepathic power. AWESOME. Formian Warriors at CR 4/MR 1 emphasize cooperation and can unleash devastating barrages of javelins.

Consider the mantis creepy? CR /MR 2 gets you the regular giant mantis, CR 13/MR 5 gets you a truly deadly colossal version – where the regular one emphasizes the ambush-predator component, the big one is all about pure combat destruction-potential – the build is beautiful in its simplicity of purpose – I honestly can’t think of many ways to make these more deadly. Kudos! This is once again, one of my favorites – and yes, we get a cool artwork! The disturbing phase spider (CR 6/MR 2) may extend its webs into the ethereal and pull those caught in them into the ethereal, making for a potentially deadly ambush predator that picks off PCs one after the other…love it! It should also be noted that the creature comes with a great artwork that makes them seem disturbing – kudos to the artist!

The remorhaz’s mythic version utilizes the giant mythic simple template (but has its stats sans it provided) and clocks in at CR 9/MR 3 – and it may bypass fire resistance/immunity. They also get the ankheg’s aforementioned trick and dish out truly devastating crits – a great creature, though, for once, I’m not a fan of the artwork provided.

fans of scorpions will like the new, bleed damage-causing barbed claws and the poison-potency-increase provided for the CR 4/MR 1 creature. And if you need something with more oomph – what about CR 18/MR 7 black scorpions? Their devastating attacks and claws make them truly devastating creatures that not only ignore fire damage, it heals when subjected to it – and thus, it rises from the furnace…awesome. Oh, and if you really want to know: Players will hate these things: They can destroy the precious armors, shields etc. of the PCs… (They coincidentally come with their own, neat artwork.)

Giant and Hunting spiders, both at CR 2/MR1 get better camouflaged webs or mindless dodging, respectively – and the latter can share another spider’s square… At the same CR/MR, spider swarms may entrap foes in cocoons (YEAH) and mythic black widows are particularly stealthy – and can entrap creatures as well! The pdf ends with the giant wasp and the giant wasp swarms – both at CR 4/MR 1. The giant wasp may fluidly charge and withdraw and may execute an impaling stinger attack that kills it. The swarm gets a dazzling drone and paralytic poison – nasty!

Editing and formatting are top-notch – nothing to complain about. Layout adheres to LG’s two-column full-color standard. One should not be remiss and mention the excessive amount of new, full-color artwork provided for most creatures herein. The pdf comes fully bookmarked for your convenience.

After the slightly less mind-blowing Lords of Law, Bugs are a return to form – Jason Nelson, Jonathan H. Keith and Mike Welham deliver an all-killer tome that hits the mark from supplemental content to each and every creature. There is not a single insectoid creature in this book that is even a bit lackluster – and the builds had to operate in the limited conditions I stipulated above to be considered feasible or smart by yours truly. In spite of this increased difficulty, the beasts herein succeed admirably at the task set – which leaves me with an express recommendation for this truly inspired book – final rating: 5 stars + seal of approval, given sans hesitation for one of the best books in the whole series.