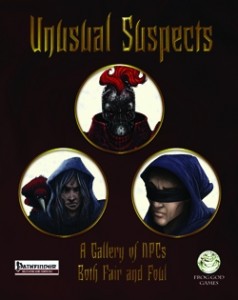 NPCs are the fodder of a given campaign and a DM, at least in my opinion, should have names and NPCs galore in the ready when designing a given campaign, providing a vibrant backdrop for PCs to interact with – and this pdf endeavors to provide NPCs in that vein – from the humble to the deadly.

Generally, the massive NPC-collection provides us with 3 general types of environments – Town, travel and Tunnel – each taking about one third of the pdf’s page-count, providing NPCs galore. But what do we get? The entries do actually come with portrait-style, beautiful b/w-mugshots of the respective characters and if applicable, new feats, mutagens and the like. Each statblock covers either one or two pages with all necessary information covered on the respective pages, thus allowing you to print out only those NPCs you really want to use. Now let’s take a cross-section of each chapter’s NPCs.

The town-section kicks off with Mawuu, a young street guide/runner-boy the PCs may encounter as he tries to steal from them or point them throughout the mazes of the city’s bowels- also a nice possibility to introduce him as a kind of surrogate son. A famous horse-breeder, a bareknuckle fighter looking for a less physically taxing career up to more complex characters that essentially are adventures in and of themselves – there e.g. is a saintly doctor gentlemen driven by schizophrenia (or abyssal whispers?) into becoming an alchemically-driven serial killer  -Dr. Jekyll, anyone?  Corrupt watchmen, bastard heir-revolutionaries, socially deadly courtesans, obnoxious celebrity adventurers with a knack of being the sole survivors of expeditions – and there also are deadly assassins, invisible stalkers that specialize in ruining reputations, legendary smiths, a lich bard, a hobgoblin assassin/serial killer, an immortal free-willed eidolon, a former master spy turned kingpin/two-face mobster boss, planar city guides and a legendary mongrelman monk. Have I mentioned the ennui-driven ruiner of reputation femme fatale vampire lady and the bone devil inquisitor?

The second chapter kicks off with an expert seeking to atone for his character flaws, an halfling doing the orphan-scam, a gorgeous snake-oil saleswoman, a wild-child turned champion, a female goblin murderess and a disturbing fanatic, scouring the lands, burning any that disagree with her fundamentalist ideology. Heretic druids, harpy bards, a tragic rogue turned paladin turned antipaladin, a legendary skald from the northlands, an elven elite archer and the ghost of the wailing queen can be found in here – as well as the witch of the crossroads, which consciously breaks the rules in a minor way, blending a witch’s familiar and the diabolist’s companion – in an imho VERY justified and oh so much cooler decision. Seriously – I’m all for the crunch being subject to cooler decisions/story-telling and the decision to do so is properly acknowledged, so no complaints there. Have I mentioned the half-fiendish treant barbarian?

In the depths of the world, we also get individuals who are rather unique – from a snoring, but capable loadbearer to nasty svirfneblin misers, ghast rangers, degenerate geologists driven by strange compulsions, paranoid dwarves, potion-vendors that think they are living constructs (especially cool if you use a construct-race in your campaign!), a “blind” cleric with a hidden agenda, a derro rust monster trainer draped in human-skin cloak, a serpentfolk wizard, a minotaur cleric, a deadly kobold summoner (including his eidolon Claws-in-dark), a duelist devoted to the god of death, an awakened cave deinonychus, a spider-made drow-hunting gnome lady, an oread paladin with celestial blood and both a drow inquisitor and a deadly dark stalker cave druid complete this massive collection of NPCs.

Editing and formatting are top-notch –  I didn’t notice any glitches. Layout adheres to an easy-to-read 2-column-b/w-standard with superb, original b/w-artworks for all NPCs adding quite some value to the deal. The pdf comes extensively bookmarked for your convenience.

Ok, before I go on, please take a moment and read the list of designers responsible for this collection: John Ling, Liz Courts, Adam Daigle, Tom Ganz, Mike Kortes,  James MacKenzie, Hal MacLean, Greg Oppedisano, David Schwartz, Amber E. Scott, Willie Walsh. Yeah. You know these names, don’t you? Take a look at your dungeon/dragon-issues. At your Paizo-supplements. Yeah. I could stop the review right here and there.

I won’t – instead I want to mention that the designers under lead-designer John Ling did not opt for the easy way out, instead using copious archetypes, multiclassing and also providing fodder for fans of alchemists, summoners etc. – without focusing too much on them. Add to that the fact that the respective characters  actually come with evocative stories that can spawn whole campaigns, not just adventures and are actually a joy to read and we get one superb supplement that comes with faces for all characters in here, adding further to its value and well-justifying the price-point of this collection  -hence I’ll clock my review in at 5 stars + seal of approval: DMs out there, get this – it will enrich your campaign and take quite some work off your shoulders as well as inspire you for years to come.

You can get this massive NPC-collection here on OBS and here on d20pfsrd.com’s shop!