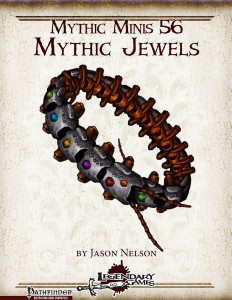 -Diamond of Everwinter: Not only sustains you in the cold and makes you less susceptible to the elements, these diamonds can absorb cold and fire damage at the risk of breaking and the endure effect can be extended to allies. For mythic wearers, this one goes all out – not only does it provide access to the Rime Spell feat, it also allows for teleportation between spaces close to massive glaciers et al. Oh, and it gets bonus abilities when in the possession of a mythic character gaining a tier. While I would have preferred a minimum time-frame of attuning for the latter options to avoid abuse, I still adore this item.

-Force Shield Pin: Not only does this act like the bigger brother of the shield broach, it can also absorb unlimited magic missiles, cast (mythic) shield and extend the benefits to an emanation – it can also be recharged via mythic surges. Damn cool and useful!

Editing and formatting are very good, I noticed no significant glitches apart from something on the line of “sn.owy terrain” – which is kind of hilarious in my mind. Layout adheres to Legendary Games’ 2-column full color standard and the pdf has no bookmarks, but needs none at this length.

3 items, all killer, no filler – and while I’m not 100% happy with the diamond’s ability-gain and the lack of an attunement period for its condition, I still found myself adoring these items – a great collection and well worth of a final verdict of 5 stars.