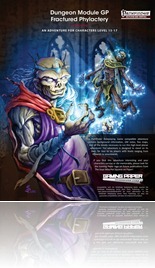 This module from Gaming Paperis 54 pages long, 1 page front cover, 2 pages of editorial, 1 page back cover, leaving a total of 50 pages of adventure so let’s check this out!

This being an adventure-review, the following contains SPOILERS. Potential players may wish to jump to the conclusion!

All right, still here? Leander d’Arstand is not your everyday lich – in fact, the undead creature was rather smart and modified the standard phylactery-ritual to split his phylactery into 4 parts and scattered them subsequently to the elemental planes. Half a millennium has come and gone and the tide of years has eroded Leander’s resolve to exist, nourishing a subtle death wish. Now, he depends on a twisted game, challenging the strongest of heroes to put an end to his undead existence. Since this is a high-level module, the adventure provides some pieces of advice on how to deal with the by now obligatory divinations and teleportation capabilities your PCs will no doubt have. Of course, since plane-hopping is involved in these pages, we also get a short run-down of planar qualities and necessary protections and peculiarities that separate planar adventures from their prime material counterparts. Additionally, much of this module is presented in a rather free-form, sandboxy style and at the end of a given section, expansion ideas and options for the respective planar forays are given alongside suitable suggestions for creatures..

That being said, first would be the elemental plane of fire, where the PCs will have to enter the palace of Overthane Grosk, fire giant warlord and owner of whole kennels of nessian warhounds. Of course, the obvious way would be for the PCs to merrily slaughter themselves through the fortress, though perhaps not the wisest one: If they agree to peacebonding their weapons, they may enter the thane’s hall and can even negotiate the release of the ruby they seek from the thane’s throne – if they endure the cruel pranks of e.g. magma mephits etc. and have come peacefully before the thane. Of course, they could also fake peace-bonding etc. – sideboxes elaborate on these tactics, though I would have liked some sample DCs for the peaceful negotiation with the thane – an omission that could have easily been rectified.

After that, we’re off to the plane of water where the keeper of this part of the phylactery is already expecting the PCs – in a vast grotto, the PCs are lead towards the old one, an exceedingly powerful Aboleth sorcerer who awaits them with a peculiar and deadly trap as well as a whole cadre of aquatic minions to challenge the PCs and add them to his collection. His spellcasting prowess notwithstanding, I couldn’t help but feel that this final confrontation felt a bit behind its own potential: One of the coolest and most defining traits f aquatic battle is its 3-dimensional aspects, which are absent from the encounters portrayed here. See Alluria Publishing’s legendary Cerulean Seas Campaign Setting/Underwater adventuring guidebook for an excellent example on how buoyancy, streams etc. can be used to make battles under water truly interesting and feel DIFFERENT.

After this one, we have an interlude when a rogue 6/assassin 10 and a summoner 16 are sent after the PCs by Leander to make things interesting and slaughter them – even if the death of one or two characters is only an inconvenience at this level. On the elemental plane of earth getting to the adventure locale might make for the toughest hindrance, even though what awaits the PCs is no cake-walk – carnivorous crystals and an advanced crag linnorm as a boss make for a challenging foray, though honestly, I would have enjoyed to see the tunnels featuring more evocative environmental elements like earth spikes, earth quakes, crystallizing viruses – you know, things that make the players appreciate how non-hostile the prime is.

The final foray, then, leads to the plane of air, aboard the flying air ship Skydragon (which comes with full stats as a magic item, but not with stats for the naval combat system – wasted chance there!) and meet its surprisingly nice crew of air-born smugglers, who is currently trying to safely deliver some astral devas – Only to have the ship attacked by a horde of demons. Whether the PCs fight with the crew, with the demons or choose to use the chaos to get their fingers on the final part of the phylactery, the ensuing epic battle and chaos aboard the Skydragon will definitely be something the players will fondly remember.

With the fractured phylactery in their hands, it’s time for the PCs to hunt a lich and their only lead to the whereabouts of Leander lead to an abandoned mansion situated in a swamp – which is, of course, a false lair protected by guards and wards as well as the spirit of a human bard who had to witness his children being slain by Leander and turned into Blood Urchins, some of the more deadly inhabitants of this haunted house-style. Among the other challenges, traps and minor undead will serve well to slowly but steadily deplete some of the PC’s resources before the meet Leander – who turns out to be a grave-knight! After taunts about wasting time on the elemental planes and an epic battle, PCs will hopefully be smart enough to realize that this seemingly final boss is just a dupe and enter the teleportation circle towards Leander’s true lair. The house has a great flair and if you don’t know the tricks to make “old” paper, a sidebox explains the usage of coffee or tea. Nice for those who didn’t know about this classic trick!

Leander’s true lair is no cakewalk and it is here that the difficulty of the module escalates – iron golems. Clockwork Golems, Alchemical, Brass and Bone Golems, Zombie Megalodons guarding a lake. Have I mentioned a room that has every inch covered in symbol and rune traps, from explosive runes to the worst of the symbols? And then there is the final showdown, in which the supra-genius lich hurls undead, spells and even dominated, good adventurers at the PCs in a lethal, epic final confrontation that would a worthy conclusion to a campaign – or the beginning of a new one, if the PCs fail and Leander reignites his ambition, seeking to enslave towns, cities and perhaps even kingdoms…

Editing and formatting are good, though not perfect: I noticed multiple typo-style glitches in the module. Furthermore, a peculiarity of the formatting is that each chapter begins on a new page, often resulting in the final pages of a chapter containing perhaps 3 paragraphs of text and being otherwise empty – space that could have been used for further information, content, or even cut in order to save printing/ink costs. Layout adheres to an easy-to-read 2-column b/w-standard, with monsters and traps as hazards being highlighted with respective symbols to make the information easier to find. The b/w-artworks herein belong to the upper echelon of quality and carry evocative themes and look neat. Robert Lazaretti’s maps are b/w and simply awesome, though the Overthane’s fortress feels a bit bland in comparison. What I don’t get is why we don’t get player-friendly versions of the maps sans map keys – the maps are nice, yes, but the players will see the letters on them – and I hate that. Player-friendly maps are by now in many publications standard. The pdf comes fully bookmarked with nested bookmarks for easy navigation.

High-level adventures are few and far between and honestly, I don’t get why – sure, stats are messy, the rules are complex, but high-level adventuring can be a total blast – with Coliseum Morpheuon still being one of my favourite modules/sourcebooks of all time, it should come to you as no surprise that I joined the kickstarter that gave birth to this particular module. If you’re following my reviews on a regular basis, you probably also know about my aversion to elemental-themed classes, though perhaps not one secret of mine: I really love the elemental planes! I really do and think that the lack of coverage and modules set on them is a huge gap not only in PFRPG, but in practically all d20-derivate. Here we have untapped potential and this pdf seeks to tap into that. Or at least tries to. What I do like about the elemental sojourns is that they not only consist of the locations, they do also take the planar traits and PC capabilities into account, yes, actually require them. I also really liked how two of the trips to the planes can be solved by non-hostile means – I just don’t get why no sample DCs to make the discussions more complex, why not more information on the NPCs to negotiate with was given. And I don’t get why the elemental plane of air has to resort to an attack by hostile beings from the outer planes instead of creatures from the inner planes. For e, that felt a bit jarring in theme.

The final location is flavourful and sufficiently creepy and the respective boss encounters as well as the final confrontation feel sufficiently epic for such a quest. Where the pdf fails, albeit slightly, is showcasing the unique nature of the respective planes – why no 3-dimensional combat on the plane of water? Why not battle between rival skyships on the lane of air instead of an invasion of one vessel, especially with naval combat rules established and made by Paizo for Skull & Shackles? Why no cave-ins or sentient earth on the plane of earth? The module features a lot of going to other planes without making them feel unique – and they should be more than a more hostile, elementally-themed version of the prime. Yes, the traits are there and fractured in, but the module lacks the environmental hazards that create the true feeling of estranged otherness. Don’t get me wrong – the planes-hopping is still good and enjoyable, but it hurts my heart to see how easily it could have been a module of truly epic coolness and instead settles for being just good.

Combine that with the editing glitches, blank space and lack of player-friendly maps and we have even more wasted potential at our hands. A capable and imaginative Dm can make this module still the stuff of legends, but as written, it falls a bit behind what could have easily been a benchmark for PFRPG planar modules. Thus, my final verdict will be 3.5 stars, rounded down to 3 for the purpose of this platform.

Fractured Phylactery is available from: