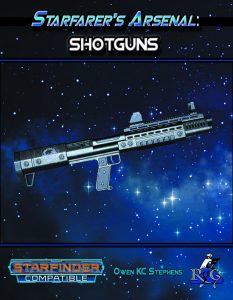 This installment of the Starfarer’s Arsenal-series clocks in at 7 pages, 1 page front cover, 1 page editorial, 1.5 pages of advertisement, 1 page SRD, leaving us with 2.5 pages of content, so let’s take a look!

The pdf begins with some observations I found myself applauding – namely that scatterguns are not shotguns, in either functionality or concept. Based on these observations, we begin with new weapon qualities. “Double” means that the weapon has two barrels, and may be fired with a usage of 1; however, as a full action, you can unload both barrels at once, expending 2 rounds of ammo, dealing additional damage as listed by the quality. “Imposing” weapons are load, bright, and somewhat flabbergasting – as such, if you use these weapons to hit and damage a target, the target gets no AoO against you until the start of their next turn. This is very strong versus some builds, but also adds a serious tactical angle to the gameplay that I really love.

The “Shotgun” quality means that you can fire scattergun shells, which come as slugs or shot; slugs behave as kinetic weapons, but may not eb fired with using a choke. When using shot, for each range increment beyond the first, you get +1 to atk, but also -minus 1 damage PER DIE. On 0 or less, the target takes no damage at all. A shotgun can be sawed off/have a shortened barrel, or a choke. A sawed-off has a shorter range-increment, determined in 5-foot increments, minimum 5; chokes increase the range increment by 10 feet. Chokes can be removed or replaced as a standard action.

The pdf presents 5 types of shotguns, all of which come in 4 different iterations. We have assault shotguns, combat shotguns (which are automatic), hunting shotguns, riot guns (imposing) and break guns (which get double). Combat shotguns get bleed as critical effect, while riot guns get wound; hunting shotguns and break guns get knockdown. Ranges and capacity make sense for the items, the former being obviously on the low end of the spectrum, and one weapon is presented for each of the 20 item-levels. They are classified as longarms, just fyi.

Editing and formatting are very good on a formal and rules-language level. Layout adheres to the series’ two-column full-color standard, and the artwork features on the cover is neat. The supplement has no bookmarks, but needs none at this length.

Owen K.C. Stephens delivers big time here; from pricing to damage values to genuinely playing differently from scatterguns, this supplement delivers big time in its frame. This is a great little supplement, well worth getting for your Starfinder game. 5 stars + seal of approval.

You can get this awesome little supplement here on OBS!