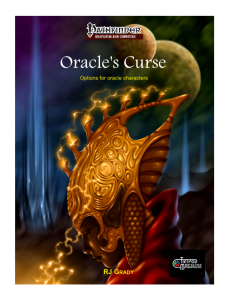 This little pdf on oracle curses clocks in at 10 pages, 1 page front cover, 1 page editorial, 1 page SRD, 1 page back cover, leaving us with 6 pages of content, so let’s take a look!

A total of 22 Oracle Curses can be found within the pages of this small pdf, so what can they do?

Well, first of all, there would be “curses” that make you venerable or a child and then proceed to mitigate some of the penalties incurred by the respective age categories – especially interesting would be the Omen (evil)/Messiah (good)-like capstone of the child or the immunity to death from old age for venerable oracles – especially the latter makes adventuring for power-gain a race against the clock. Branded oracles are fire-themed and may touch foes to brand them, while chilled oracles receive a cold-themed suite of abilities, which thankfully is NOT an inverse copy of the branded curse – kudos for going the extra mile there, especially since the spell-duplicating touch actually receives a nice modification at higher level to set it apart!

For more…let’s say, unpleasant fellow, the choleric and feral curses – though the former lacks a detriment – flying into rage as per the spell is a flat-out bonus that has no drawback attached apart from role-playing since control is maintained. Not sold there. The animal-focused feral curse does a better job there. Being a focus of a prophecy and hence, exceedingly easy to scry upon makes for an uncommon detriment. The Ravenous curse has a weird glitch “You cannot eat for more than one ten minutes at a time.” – I have NO IDEA what that means, which renders the whole curse somewhat opaque.

Being phlegmatic, which hobbles your initiative, or frenetic, which translates to not being able to take 10s or 20s both are interesting, as would be what I’d call “icky curses” – odious curses you with stench, which is quite a powerful ability, yes, but also not nice for your allies, while infested nets you disgusting parasites – I somehow had a Dark Souls flash-back there for a second…

Waking Dreamers have a hard time focusing on what’s around them in favor of esoteric spell-like abilities, while the more worldly sanguine curse does something similar, but instead grants you an aura of courage and helps at higher levels to avoid being staggered or falling prey to compulsions. There also is an array of curses that nets you a negative condition permanently – being wan allows you to pepper foes with negative energy/exhaustion effects, while being melancholic delivers the shaken condition, but helps against its worth brethren and against emotion effects at higher levels. The most powerful of these examples would be the catatonic curse, which smacks you with being staggered – and yes, this changes the playing experience drastically.

Some people are shunned and ostracized and whether you opt for the friendless or its bigger, more nasty brethren, the forsaken curse, both deliver impediments – from charisma not being applied to diplomacy (interesting!) to the inability to benefit from aid another, both make for compelling similar, yet very distinct cases.

I’ve kept my 3 favorite curses for last, though: Sedentary hobbles your movement down to 5 ft and neuters your effective str and dex-score down to curse level (which is oracle level +1/2 level in other classes), but also provides significant, flavorful benefits to offset this massive penalty. The Unchained curse is narrative gold and makes you a blank slate for alignment purposes, allowing you to do things no other class might dare. Finally, the merciful curse forces you to be a goody two shoes, yes, but it also nets you lay on hands and even mercies – and makes for a glorious curse for truly good characters to have.

The pdf also provides a bonus creature, the Rot Grub Swarm, which clocks in at CR 7 and is rather nasty.

Editing and formatting are very good, though not perfect – I noticed minor glitches here and there, one of which actually made the intention of a curse opaque, so that’s a strike against the pdf. Layout adheres to an easy to read, printer-friendly 2-column b/w-standard and the pdf has no art, but needs none at this length. While bookmarks are not compulsory at this length, having some would have been nice.

RJ Grady’s Oracle Curses have a hard standing with me – I’ve read many of them and they are one of the trickier things to design. The level of hampering they have on the player character needs to be balanced on an individual level within the curse, while also maintaining a general sense of balance. That, and I’ve read *A LOT* of Oracle Curses. That being said, while I noticed some thematic overlap with other pdfs I’ve read, the mechanics per se actually try to be different, be unique, be compelling. The Oracle Curses herein did not bore me – more often than not, the curses do something mechanically unique or daring and thus truly enrich one’s game. The pdf is not perfect, but due to the very fair price point, well worth a final verdict of 4 stars.

You can get this nice addition for the oracle class here on OBS and here on d20pfsrd.com’s shop.