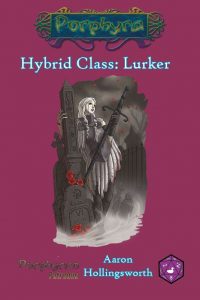 This Porphyran hybrid class clocks in at 26 pages, 1 page front cover, 2 pages of SRD, leaving us with 23 pages of content. The pdf is laid out in 6’’ by 9’’ (A5), which means you can fit up to 4 pages on a sheet of paper when printing this.

So, the lurker? Talk about a blast from the past – the lurker could be construed to be one of the OGs regarding hybrid classes. Premiered back in 3.X-days in Complete Psionics, the psionic rogue has been an interesting concept, but one that had some serious issues. Now, one glimpse at this class will show you something unexpected: The lurker as envisioned by Purple Duck Games is actually a hybrid of spiritualist and soulknife! Now that is an interesting combo, so let’s take a look at the execution.

Chassis-wise, the lurker gets d10 HD, 4+ Intelligence modifier skills per level, full BAB-progression as well as good Ref- and Will-saves. The lurker is proficient with simple weapons, her own mindblade (regardless of form), light and medium armor and shields, excluding tower shields. The class can form mindblades as a move action, and may choose between light, one-handed and two-handed, which is pretty much analogue to the soulknife. A difference would be, though, that the lurker chooses an emotional focus at 1st level. These provide a linear ability progression akin to a bloodline or a cavalier order, providing abilities at 1st level, and then later at 7th, 12th and 17th level. 7 such foci are provided, and most of them net a bonus feat as well as an active ability at first level. To give you an example, Anger nets Power Attack and the powerful strike ability, usable 3 + class level times per day, which increases the damage die size by one step. 7th level provides the swift action aura that nets +2 to melee atk and -2 AC. Okay…so does the aura have a duration? I assume it needs to be maintained with swift actions, but clarification would be nice. Unlike other auras within, it does not state that it can be dismissed, so a maintenance action cost is implied. Enlarge person (with frightful presence added at 18th level) and a 1/day properly codified wail of the banshee can be found here.

Duty nets Iron Will and an atk and damage bonus versus a target attacking allies. Slightly odd – the lurker gets no control over to which enemy these bonuses are applied and only one may be in place at any given time. 7th level yields an aura that nets +2 to AC, CMD and saves in a 10-ft. aura. Here, the dismissal action is noted. 12th level nets immunity to being flat-footed in surprise rounds, as well as Wisdom modifier to initiative. 17th level provides immunity to possession and mind-affecting effects. Minor complaint – a spell reference is not italicized here.

Despair is unique in that it does not net a feat. Instead, the lurker gets +2 to attack and damage rolls versus targets affected by fear or despair-like effects – the latter are concisely codified, though a spell reference is not italicized. The strikes of this emotion impose a fear/emotion-based penalty to targets failing their saves. Activation and deactivation are noted, and these penalties stack with themselves – to make up for this power, the strike is limited in daily uses. Aura of despair and 3/day crushing despair can be found. The highest level ability eliminates the save versus the strike-debuff.

Fear nets Stealthy and a fear-inducing strike with limited uses; the focus nets an aura that can intensify fear effects (nice). Higher levels allow for increases of the fear-condition imposed. The level 17th ability makes allies in range of the aura immune to fear.

The hatred focus nets Weapon Finesse and the ability to designate a target as a hated enemy. Against this target, the lurker gets +2 to atk and + ½ HD (should be class level) (minimum 1) to damage versus the target. The lurker takes a -2 penalty to atk versus other targets. This is activated as a move action, which is upgraded to the option to use it as a swift action at 7th level. 7th level also nets an aura that inflicts the lurker’s Charisma modifier in damage to those hurting lurker or his allies while within 10 ft. The aura is properly codified. Higher levels net +3d6 sneak attack versus the hated enemy, upgrading to +5d6 at 18th level. Starting at 17th level, allies also get +2 to atk and +4 to damage versus the hated enemy.

Jealousy nets Deceitful and makes targets hit take a -2 penalty to attacks made against creatures other than the lurker. Once more, activation and deactivation are properly codified, and the ability can be used 3 + class level times per day. 7th level nets a 20 ft.-aura that can make targets in the aura that attack or cast spells on targets other than the lurker staggered on a failed save. At 12th level, attacks versus the lurker’s allies enrage him, granting +2d8 precision damage versus the target until the end of the next turn.17th level allows for the immediate action swapping of places with allies. These effects are properly codified.

Regardless of focus chosen, the lurker gets a single 0-level knack to be cast at will, chosen from the spiritualist’s list. Charisma if the governing attribute. The class also obviously begins with shape mind blade. 2nd level and every even level thereafter net a new blade skill. Throw Mind Blade (a soulknife, not a straight lurker ability) has been translated into a blade skill for the lurker. The blade skills btw. are curated – the lurker may take bladestorm or bladewind, but e.g. not alter blade. Combat slide, deadly blow etc. can also be found. Interesting: The Mind Shield bladeskill is here…and, alas, the pdf misunderstood this one and labors under a horrible misconception that breaks this WHOLE DAMN TREE OF BLADESKILLS. And this is what happens when you design for a class you don’t understand properly:

There is a blade skill that suddenly talks about enhancing the mind shield with weapon abilities instead of shield abilities, which is not something you can do with the mind shield bladeskill – the ability behaves like a shield, but RAW is no shield. Now, if you’re actually familiar with psionics, you’ll recognize why. This hybrid class failed to grasp that d20pfsrd.com lumps ALL bladeskills into one list. However, if you actually are proficient in rules language, you’ll know that a shield bonus makes no shield…and if you know psionics, you’ll know these shield enhancing blade skills. They are from the shielded blade soulknife archetype, who gets the base ability to, you guessed it, make a PROPER mindshield. Btw.: In Ultimate Psionics, that prerequisite and separation are VERY clear, meaning that this was built solely on d20pfsrd. Wanna know what’s hilarious? The pdf actually once refers to the form mind shield bladeksill, which does not exist – it’s an archetype ability in the first place, and it’s absent from the pdf. This is just sloppy and can cause massive confusion when you attempt to run this as written.

The lurker may take evasion and its improved version as a blade skill, but not the soulknife bladeskills that build on the energy weapon style skills: Firestorm, for example, is not on the lurker list. Odd: Lightning arc’s here and psionic focus-less. Indeed, the psionic focus rules-component is thoroughly absent from the class. Reaching blade is an exception and has a remnant reference to psionic focus, which is odd and an obvious oversight.

A unique skill lets the lurker get, as a full-round action, the benefits of blur for one minute – sans limit. This should have a minimum level. Another unique skill nets ghost touch for a round as a move action. The lurker can also take rogue talents, trapfinding and a swingy competing attack roll to block bladeskill, but since it is contingent (alongside its improved version) on the shield issue, this one is basically not functional.

The lurker’s mind blade grows in power at 3rd, 5th, 9th, 11th, 15th and 19th level, with the usual +1. In a puzzling display of WTF-level weirdness, the proper caveats of the base soulknife that govern the special ability etc. dispersal and maintain hard caps on enhancement bonuses have been ignored. *sigh* Cool: At 3rd level, the lurkers may move through solid matter, but this is painful: They take nonlethal damage and 1 point of Strength damage per 5 ft. moved, and the latter can’t be ignored. The lurker must begin and end movement outside of the solid matter…which is cool. But you don’t always know whether there’ll be solid matter on the other side, so what if you’re trapped in the wall? 5th level nets detect undead as an at-will SP. 7th level nets invisibility 1/day, with every 4th level adding another daily use. 9th level nets 1/day see invisibility. The capstone nets immunity to mind-affecting effects and possession. Devotion lurkers instead get immunity to death and poison effects.

The pdf closes with 9 different types of favored class options, which have been assigned to a wide variety of classic and Porphyran races.

Editing and formatting are good on a formal level, featuring a few missed formatting components on a formal level. On a rules level, this displays some very unfortunate issues, which is particularly severe, considering how much content was simply cut copy pasted. Layout adheres to the 1-column b/w-standard with purple highlights that we’ve come to expect from Purple Duck Games. The pdf has no interior artwork.

Aaron Hollingsworth’s Lurker began really promising. The emotional focus angle provides meaningful differentiation and has a couple of unique angles. That being said, the lurker does suffer from quite a few avoidable issues, some of which, alas, do compromise rules-relevant components in its design. More importantly, the unique bladeksills and shield tricks display an ignorance of how shield bonuses and shields work. This glitch is really, really bad – I mean, when you already have the blade skills pretty much all done and don’t have to, you know, actually write them, then at least curating and tweaking them properly would be the least one could ask for. As much as I tried to like this, we are thus left with a class that could have been amazing, but that really sinks itself due to a lack of care in its design. I am, honestly, quite appalled at the bladeskill glitch.

While this had all the tools to be a 4 or 5-star class, while it could have been unique and evocative, as written I can’t go higher than 2.5 stars, rounded down.