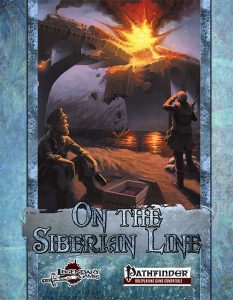 This module clocks in at 66 pages, 1 page front cover, 1 page editorial, 1 page ToC, 2 pages of introduction, 2 pages of SRD, 1 page back cover, leaving us with 58 pages of content, quite a lot, considering the amount of information per page Legendary Games’ provides.

Now, “On the Siberian Line”, as the name implies, is an adventure that takes place in our world – to be more precise, it is intended to be spliced into the “Rasputin Must Die!” adventure, between the first and second part. The module is intended for 13th level characters, and is roughly based on historical facts, with a bit of the fantastic spliced in, obviously. The pdf includes the bushi fighter archetype, who gains a modified proficiency list and exchanges a couple of fighter bonus feats with a samurai or cavalier’s order. Instead of bravery, we have bonuses to chosen Knowledge skills, and instead of weapon training, we get a scaling bonus to atk, damage and combat maneuvers with the weapon in question, as well as applying the bonus to e.g. sunder attempts versus the weapon. The pdf includes the stats for 4 different types of real world armor, with the heavier ones providing DR versus firearms. The pdf also provides stats for percussion grenades and the Lewis M1916 machine gun.

Now, the cartography deserves special mention – it is amazing: Both settlements and combat-map-style encounters receive maps, and the latter are provided in aesthetically-pleasing, isometric versions. Cooler yet: In style, they are deliberately crafted to be reminiscent of propaganda posters of that time There is one downside here: While quite a few of these encounter maps work perfectly well as player maps, not all of them do, and there are no explicitly redacted versions sans keys provided. The adventure does come with copious amounts of read-aloud text.

We begin with the arrival of the dancing hut on Earth – it materializes on a rozen river, and that river may well collapse. Similarly, there is a shadow projection nearby, allowing for seamless integration into Rasputin Must Die. However, the hut will be spooked and run – causing an avalanche. Worse yet for the PCs: The Strange occurrences will make the PCs targets for an air raid executed by Nieuport 12 biplanes! It does not end there: Drawn by the battle, soon, a troop of Bolshevik soldiers will approach, briefly discuss the weirdos…and then open fire! In the chaos, all but one of the prisoners of the Bolsheviks escape: The PCs will have a chance to save the remaining British soldier after dealing with the deadly troop: Sam Hooley. Pointers for the discussion with Hooley and his rationalization of non-human beings and magic are provided, and the pdf does a solid job keeping the scenario on track here.

Not soon after, the PCs will hear shots ringing – and Sam immediately recognizes his fallen comrades. Spread of the bodies indicates that they have been shot from a single position, and indeed, this area is the hunting ground of Snezhana Bovarina, a rather deadly sniper working for the Russians. The combat encounter here is rather interesting, courtesy of the complex terrain, which includes a whole array of bear traps to keep charging characters at bay. Unfortunately, this is one of the maps that does not come with a player-friendly version, which means that the traps and sniper’s position are actually notes on the map, requiring some work by the GM. On the plus-side, it is very much possible that the PCs take the sniper alive – Sam does note the Hague convention preventing the killing of combatants that have surrendered.

Completing their overland trek, the PCs arrive at Priiskovyy, where the joint allied forces currently have their camp under the command of General Henry Nicholls and Katashi Wada. The camp is fully detailed and mapped (once more sans player-friendly version, but here, it’s okay – Sam could theoretically explain what the Cs and numbers on the map mean…), and, after meeting the brass, the PCs quite probably are enlisted. When confronted with news of Rasputin being alive, the commanders note that a double-agent that goes by the name of “Scriba” has provided similar intel.

At this point, the book takes a much-welcomes departure from the combat focus that is so prevalent in the AP at this point, splicing an investigation into the structure of the AP. There are things amiss in the camp, as the PCs will soon find out while waiting for the train. The module provides a massive amount of different, scaling pieces of information regarding the occurrences here – and indeed, there is a traitor among the soldiers: Arsenic intended for syphilitic soldiers was stolen and mixed into food, providing a rather creative angle here: Perceptive and particularly curious PCs will also pick up the mention of the “Order of the Evening Star” and notes towards magic: There is an imperial foo lion that will not be acknowledged, and Sam will be framed for murder –it’ll be up to the PCs to prove his innocence, as the Japanese drag him away. Unearthing the master spy responsible will be a hard task indeed.

Once this section is completed, the PCs will take the train, and here, missed information may be imparted – oh, and a potent, high-level ninja sans tongue may well try to assassinate the PCs…but due to the man’s tongue missing, interrogation will be difficult. This is where the module shows some serious care, as the module does take PC abilities to read thoughts etc. into account, proving a connection to General Wada, and providing the association should be difficult, as the mean do not recognize the ninja. That being said, the PCs may actually start putting together pieces of information here, concluding that Baba Yaga has touched Japanese shores as well. If the PCs botched their interaction with the spy, they may face a deadly encounter, wherein the bridge crossed by the train is blown up by an elite cadre of saboteurs – stopping these fully statted folks will be a hard task indeed. Whether the reinforcements for Irkutsk, currently held by the Czech Legion, will either have to walk or arrive by train in Port Baykal to board a ship and prepare for the invasion of the city.

Sam, in the meanwhile, was taken aside by Wada, who, with his men, left the ship in reach of Irkutsk. Sam believes that Scriba is endangered by Wada and his men and thus shares the code phrase. Irkutsk is intriguing: The city features quite a few armies, and the PCs can use various ways to get through the fully mapped settlement: The module takes Stealth and high-level magic into account and provides guidance there – oh, and since we’re talking about high-level PCs, the adventure also features one-man army rules for the PCs, which make for a fascinating and fun mini-game using the mass combat rules! That being said, if you do dislike these, the module does offer not only for variant rules within this context, but also for means to play the adventure without resorting to them!

However, as the PCs arrive at Scriba’s location, they will have been outmaneuvered: Wada has already taken the agent and hijacked the SS Baikal, hell-bent on killing both Rasputin and Baba Yaga – mistrustful, the PCs will have to best the Japanese that have taken control of the ship and general Wada – as well as the mighty foo lion. Explaining why they wear the witch’s dark mantle can make for an interesting angle, and indeed, the general and his order turn out to not actually be that opposed to the goals of the PCs…but that doesn’t mean that the stubborn samurai will just lay down his weapons…

The adventure concludes with detailed notes on how to proceed with the AP.

Editing and formatting are top-notch and adhere to the high quality we’ve come to expect from legendary Games in both rules-integrity and formal criteria. Layout adheres to a 2-column full-color standard and the pdf comes with nice full-color artworks as well as neat cartography; as noted below, the absence of player-friendly maps is a minor issue that primarily hampers one encounter, but represents otherwise less of a problem. The pdf comes fully bookmarked for your convenience.

Pedro Coelho’s yarn during a Weird World War I is a compelling adventure that adds further context to what is often regarded as a highlight, perhaps the highlight, of the Reign of Winter AP – for those groups out there that enjoy its premise, that is. The additional time spent in our world can make for a compelling angle, and indeed, the challenges posed are diverse: From challenging tactical encounters to the investigation and the mini-game, the mixture of genres helps render the stay in Russia more diverse and interesting, at least as far as I’m concerned. If anything, the adventure excels in a variety of different ways, particularly in accounting for high-level capabilities. The incredulity of locals when confronted with magic and the like are explained in a sufficiently concise manner, and the adventure, as a whole, makes for a great addition to the AP. In short, I consider this to be a great addition to the series, and a yarn that is both mechanically compelling and diverse – if anything, I wished that this was an even heftier tome! Rating-wise, there is next to nothing to complain about. While the lack of player-friendly maps hurts the adventure, everything else is compelling, creative and fun. Hence, my final verdict will clock in at 5 stars – if you and your players loved the premise of “Rasputin Must Die!”, then get this – it’ll make that chapter of the AP shine so much more.