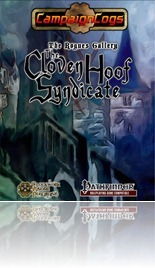 This pdf from Clockwork Gnome Publishingis 45 pages long, 1 page front cover, 1 page editorial, 1 page ToC/SRD, 1 page back cover, leaving us with a total of a whopping 41 pages of content, so let’s check this out!

This pdf kicks off by announcing its intent, which essentially is bringing a new and sinister twist to the old trope of the thieves’ guild and then goes on to introduce us to the presumed default setting of Eorthe, the world of CGP. However, you should be aware that the content herein can easily be transported to just about any setting and is in no way too tied to campaign setting specific tropes. Aerendal, City of viridian princes, built upon 6 rocky islands, connected via bridges, makes for the default and we get a whole page describing the city, including a broad over-view map with color-coded districts. I hope we’ll one day see an extensive gazetteer including excessively detailed maps on what could become a Venice-style den-of-sin metropolis and intriguing setting extraordinaire.

The Cloven Hoof Syndicate is an interesting organization not only because of its extensive history – reaching back towards a planar event involving Faerie and the realm of Abaddon, the syndicate and its twisted members are detailed in excruciating detail. To be more precise: From smuggling, to drug-dealing and prostitution, the kraken-like tendrils of the syndicate reach into all spheres of illegitimate businesses and describe the methods of the syndicate and its means to avoid detection in detail. Better yet, sample incidents involving key-members of the syndicate’s operations are covered and, along-side interspersed seeds of crunch like a new drug etc. serve to paint a tapestry of sin most foul and subtle that not only makes the organization a believable threat, but also makes it clear that the paranoia necessary to uncover its operations will border on the insane, limiting (apart from the blackmailed officials) the options of prospective PCs even further and making this conspiracy a threat that is most definitely not to be trifled with unprepared – their capabilities to create so-called Star-motes, “gems” (complete with rules)with a more sinister origin, is also testament of this.

Of course, no organization can live only from a stellar frame narrative prefacing each chapter or the excellent description of the operations -it needs people to conduct said endeavors. From rank-and-file members (CR 2) to high-level assassins (CR 9), we get a selection of 6 sample statblocks before we get to know them also fully-stated key-members of the syndicate, from its instigator and commander-in-chief , who is a challenge rating 16 brute and comes not only with a full statblock and more than one page of concisely-written prose, to a half-orc brute and the mistress of the prostitution-racket as well as the insane derro alchemist (including 2 new alchemist discoveries) that refers to himself in the plural majestatis (or has MPD) to smugglers that not only are dark creepers, but also carry a cursed taint, the key-members all provide interesting statblocks, entwines, cool narratives and perform key-functions in the smooth running of the syndicate. Have I mentioned the rakshasa-blooded skeletal champion (magus) rogue/sorceress or the tainted nixie bard? You get the idea – the key-members of the syndicate are not only dastardly villains, they are truly intriguing characters of their own right and can play in the upper echelons of cool builds, their abilities reflecting well their status and role in the organization.

Even better, the two level-base of the syndicates operation, the halls of abandon, are portrayed in excruciating detail as well, providing a cool location and a neat potential for an “into-the-lion’s-den”-type scenario or even as a base that can be established for the underworld contacts of the PCs, slowly sowing seeds of the conspiracy…

Editing and formatting are very good, though not perfect – I encountered some minor typos in the text. Layout adheres to a greenish-tinted parchment look and the 2-column standard and the full-color artworks are nice: While city-scapes feature an almost impressionism-style standard and transport the taint well, most of the characters come with artworks I’ve seen before in other publications. The pdf comes fully bookmarked (though I would have enjoyed nested bookmarks for the statblocks) and with a printer-friendly b/w-version. This version, while art-free, has only removed the pieces of artwork, resulting in odd blank spaces in this version of the pdf -reformatting the text in order to save more space would have been the more prudent thing to do here. The cartography is excellent and while letters denote the functions of each room, as a DM you could hand out the maps to the players as is. The pdf comes with full Herolab-support.

Clockwork Gnome Publishing as a company so far does not have a steady output, but oh boy, when they do release something, I look forward to it – after their last offering on the maggot god Morithal became my new benchmark for what to expect of cults and religion-write-ups, the Cloven Hood Syndicate by author Paris Crenshaw seeks to establish a new default of what to expect of conspiracies and secret societies – and let me assure you, this syndicate is not another tiefling organization, but something much more sinister – so sinister in fact, that they might make great replacements of e.g. Zobeck’s Cloven Nine or similar guilds. The prose in this supplement is of a quality scarcely seen in rpg-products and makes the reading of the pdf an actual joy to do rather than a chore and the frame narrative of an increasingly alienated and desperate investigator also helps to convey a sense of the depth of this particular rabbit hole. Better yet, there are numerous side-bar, should you be so inclined, to inform you about CGP’s upcoming world and some peculiarities regarding e.g. ethnicities. That being said, this pdf unfortunately is not perfect: There are some minor editing glitches and I would have loved to get a map of the stunningly enticing default city in which the syndicate is set. Furthermore, the sloppy b/w-version is a disgrace to the quality of an otherwise stellar offering. HOWEVER, even with these blemishes, I can’t bring myself to rating this book low – I’ve read a lot of tribes/secret society sourcebooks and for the low price, this is definitely one of the best. Hence, I’m going to do something I seldom do – I’ll rate this 4.5 stars, round down to 4 and still award the Endzeitgeist seal of approval. I urge you strongly to check this out and hope the printer-friendly version will be revised to reflect the quality of the full color pdf.

The Rogues Gallery: The Cloven Hoof Syndicate is available from: