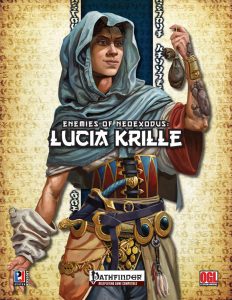 This installment of the Enemies of NeoExodus-series clocks in at 7 pages, 1 page front cover, 1page SRD, ½ a page advertisement, leaving us with 4.5 pages of content, so let’s take a look!

Lucia Krille’s story is one that is told behind the scenes of the legends of our games a vast multitude of times – the tale of mediocrity as a thief, whose life was changed in one single moment, one that ended up changing towards one life of exceptional peculiarities with one opportunity, when a package she stole burst into magical flames, changing her…and allowing her to turn her skin to granite, granting her limited self-healing as well as DR, natural armor etc. – to become a being of living stone. Thus, her base CR 4 stats do not make use of classic level-structures and instead follow a design paradigm closer to the creation of monsters, though grounded in standard NPC design. This makes reverse-engineering of the statblock rather difficult, with e.g. her initiative of +6 seeming to contain a +3 inherent bonus – at least, that’s the only explanation I could find. Similarly, her Ref-save is really high (+11) for her HD and seem to have a similar bonus featured in her stats (good save +5, +3 Dex…which means that +3 is unaccounted for re items, feats, etc.) – while personally, I don’t mind this, it’s something that a few of my readers want to know about, so yeah.

From this set of stats, we further follow her story, as Lucia became jailed by the alchemist Mikando Moor, only escaping after the lab burst into flames, consuming her benefactor-turned-captor. This hardened her, obviously. Odd, though: her Ref-save actually gets worse with no apparent reason for that in the following iteration. That being said, regarding saves, CMB etc., the values and attributes simply don’t line up – there are some glitches here. On the plus-side, I love how she has gained new abilities, like seeing through smoke and cinder – it makes for a cool progression mirrored in her abilities.

As she continued work as an enforcer/secret weapon of crime lords, her use of powers began to increase the changes within her, slowly granting her more powers, including elemental abilities in her CR 11 iteration. Finally, she makes, at CR 16, the transition into an ever-changing, potent elemental creature.

Editing and formatting on a formal level, are very good. On a rules-relevant level, the statblocks unfortunately sport glitches, which, in spite of the creation mechanics being a bit opaque, becomes evident when comparing the different iterations. Layout adheres to LPJ Design’s gorgeous 2-column full-color standard for NeoExodus files. The artwork of Lucia is amazing. The pdf has basic bookmarks, in spite of its brevity. Kudos!

Neal Litherland’s Lucia Krille is, idea-wise and ability-wise, a really cool NPC/adversary/foil. I really like the progression of Lucia, which makes using her as a recurring character with evolving abilities rewarding. Similarly, I enjoy the unique signature abilities she sports. At the same time, however, the builds do suffer from some obvious errors – I can live with inherent bonuses here and there, but once some basic stats don’t line up, things become a bit troubling. That being said, while not perfect, the pdf is inexpensive and may well provide a worthwhile adversary to challenge your PCs. Provided you are not as picky as I am regarding these things, you’ll get a nice adversary. My final verdict will clock in at 3.5 stars, though I cannot round up for Mrs. Krille.

You can get this adversary here on OBS!