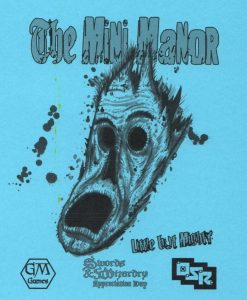 This little pdf clocks in at 23 pages, 1 page front cover, 1 page inside of front cover, 1 page ToC, 2 pages of SRD, 1 page back cover, leaving us with 17 pages of content, laid out in the tradition 6’’ by 9’’ standard that means that you can fit up to 4 pages on a given sheet of paper, should you choose to do so.

First thing you should know: This adventure is intended as a solo-adventure, i.e. one GM and one player. It is also written in a somewhat stream-of-consciousness-style, which does not automatically distinguish between prose and descriptive text, though the formatting does highlight important bits with bolded or italicized text, but still: It’s very much recommended that you read the module in its entirety before running it. The module assumes ascending AC, silver standard and S&W as the default rules. The module champions that you resolve crazy ideas by having the player roll a d6, with 4+ denoting a success, should you find yourself in a pinch.

Now, beyond that, the module immediately makes clear that it was written for adults and as such, features some horror-themes that are pretty dark.

If you’re easily offended, then you may want to look elsewhere. It should also be noted that the adventure assumes a PC of at least 5th level, and for a reason – the module is rather difficult and deadly. Failure and death is a VERY REAL possibility. This is not for the faint of heart…which can also be said about the rather transformative choice that the successful end of the module poses. You see, there is a new race herein, but one that I cannot discuss without SPOILING the super-effective revelation that accompanies the final boss fight of the adventure. The race presented is really strong, but also suffers from severe drawbacks that make up for that.

Aesthetics-wise, you can probably picture this best as a TCM- or Saw-type of dungeon, or, if you’re so inclined, as a module indebted most to the aesthetics of e.g. early Nine Inch Nails or Marilyn Manson videos: A sense of grime, pain and dirt is evoked as a central leitmotif. Now, personally, I strongly suggest playing this adventure with a character with a more martial bent, i.e. fighter or thief, for the premise can make the adventure rather brutal from the get-go.

…but in order to discuss that, I need to go into SPOILERS. Potential players should jump to the conclusion.

Okay, so the PC has been carousing. Hard. He has obviously had an altercation with a city guard. Now, the PC awakenes, Naked, cut up badly (1/2 hit points), shackled to a dead guy. Other pairs of prisoners have their faces cut off. A mean, big guy in a filthy loincloth is currently cutting off the face of another prisoner, obviously sporting a key hanging from a chain. The foot bumps a severed arm, which may just be the weapon, with its sharp bone protruding, that the PC needs to survive against the face-cutter. (But it does fall apart before the face cutter goes down.)

This is visceral in the right ways. Grimy. Deadly. This also is represented in the random encounters, mind you: Goblins with insta-kill poison, a blackened, smoldering ogre which will rise from the dead if slain, a merman beserker encased in a watery bubble, a pittrap with giant eels for added injury to…more injury. The 6 random encounters are savage and sport interesting visuals. Now, the hand-drawn map comes sans player-version, but s easy to draw and the PC can’t find out about the layout of the complex anyways, so I’m good with it. Exploring the complex may put the PC in conflict with a goblin shaman who dabbles in summoning and have the PC potentially attached/merged with the Hellraiser-esque, cursed Suit of Spines, which btw. is not the only unique magic item or spell herein; in fact there is, for example, a trident that, upon command, encases creatures in water, allowing aquatic beings to function on land, which may well drown careless PCs. There is a soul-collecting spirit dunjon, which acts a unique hazard/encounter of sorts…and there is the brutal boss-fight, which comes with perhaps one of the coolest tricks I’ve seen in a while.

This is imho the primary reason to read this before playing it as a GM – the immediacy of the narrative does lend itself to spontaneously running this, but the trick associated here can *potentially* contradict the improvisation of a careless GM, depriving it of its efficacy. And no, I’m not going to explain why this made me grin from ear to ear and why I consider it to be so effective. For that, you’ll have to get this yourself.

Editing and formatting have improved significantly compared to older GM Games-supplements. While the immediacy of the writing style is somewhat uncommon, I found it surprisingly effective, even though the structure and organization of the module thus become slightly harder to run. Layout adheres to a 1-column b/w-standard and is printer-friendly. The b/w-cartography is nice and the only artwork is on the front cover. The pdf has no bookmarks, which represents a comfort-detriment.

Tim Shorts’ first mini-Manor represents a turning point, at least as far as how I think about his writing is concerned. This is a bit more experimental than the first 3 manor-issues, but it is, at the same point, tighter – in the design of the race, the items, in the presentation.

Oh, and it was written for S&W-appreciation day and is FREE. Honestly, this humble adventure really surprised me. It is delightfully dark, grimy and brutal. Surviving it is an achievement and can really make a character that has become somewhat boring fresh once more. You’ll see what I mean when you play this. In spite of a few formal complaints, this would score high in my rating system as a commercial module, for pulling off the trick in the end can be immensely gratifying for all involved.

However, this is actually FREE.

This is SO worth downloading if you even remotely enjoy dark scenarios, horror, a desperate type of nightmare and if you really want to challenge one of your PCs. Seriously, we’ve all been at the point where we needed a really good solo-scenario, and this delivers in spades. I loved this one, and it is more than worth checking out – my final verdict will clock in at 4.5 stars, though I will round up and slap my seal of approval on it, courtesy of my knowing a ton of commercial modules that fail to evoke such a concise atmosphere, that have such a cool payoff. Highly recommended!

You can get this effective 1-on-1-adventure for FREE here on OBS!