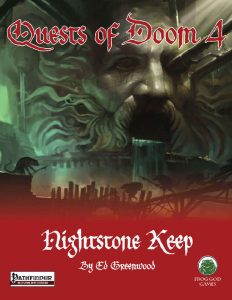 This review was requested by my patreon supporters, who asked for slow, but steady coverage of the entire series.

Okay, while nominally set in the Lost Lands campaign setting, Nightstone Keep can easily be put into just about any campaign setting without much hassle. We have a location-based adventure wherein the PCs explore the eponymous dilapidated keep as the baseline premise. The adventure does not sport read-aloud text, but does feature one thing I very much enjoyed: The b/w-maps presented herein are actually player-friendly – no annoying numbers etc. are featured, and there are no spoilers on the maps, just general designations. Kudos.

The module is intended for a party of about 6 characters of 5th to 8th level, at least nominally. What does that mean? Well, this is a Quest of Doom module, and as such, I expected top-tier difficulty; however, a more salient way of looking at this would be to consider this a horror adventure; at the very least, a dark fantasy yarn. If you approach this with the mindset that you can just “win” it by doing everything right, you’re facing a TPK. The module, alas, isn’t particularly good at telling the GM how to handle the challenges presented, and one CAN argue that this is just as broken as “Awakenings” in some ways; however, I maintain that, unlike said adventure, “Nightstone Keep” can potentially work, or at least, is closer to actually working as a top-tier difficulty module. This can be bested. Kind of.

In order to explain the potential issues this has, and means to offset them, and whether you want to check this out, though, we need to go into SPOILER-territory. Potential players should jump ahead to the conclusion.

All right, only GMs around? Great! So, Nightstone Keep was abandoned some time ago, and apart from the initial encounter that pits the party against so-called carrion graw (crow-like monsters), the focus of the module otherwise is a single creature of sorts. Of sorts? Yeah, remember the awesome Monstrous Arcana-series from the second edition days of yore? If I had to liken this to any other module, this series, and Matthew J. Finch’s fantastic “The DemonSpore” would be my frames of reference.

You see, a strange, brown, fuzzy growth spread through the keep – and it*’s the herald of the true horror that the heroes will need to best, the Aurunglyd. Like the DemonSpore, we have a fungal infestation here, but one without the whole divine angle – instead, this one seems to simply spawn servitor creatures with different roles , like tendrilled maws, the slow, but hardy glaur guardians, or the nimble, aerial speartongues. In a way, the plant monsters in this module provide a strange and somewhat frightening ecology that is interesting and well-executed.

To a point. You see, having e.g. the Huge glaur guardians only sport a speed of 10 ft.? That’s smart, and clever parties can exploit this to hell and back – in a good “fight smart” sort of way; the massive tunnels and general size of the environments also means that the module can *play* very much like an awesome survival horror scenario. You see, the aurunglyd has an Intelligence of only 11 – it’s not *dumb*, but it’s also not super smart, so that’s a good thing; it lets the GM play it accordingly, and *fall* to smart tactics. In theory.

There are two issues with this critter. It’s a CR 17 monster on its own, with 6 attacks, all sporting grab, and the engulf DC is 27. Ouch. Still, can be handled. It’s two details that make this critter cease functioning: 1) The monster has regeneration 10; RAW, this regeneration has no negation clause. I kid you not.

From context, I assume that fire and lightning were supposed to negate it, but the statblock fails to specify that. 2) This thing has 210 hp, regeneration 10. Oh, and it has an artifact that makes it ALSO regenerate 1d4+3 hp per round. The gem of vitality is an artifact that the PCs might well end up with – it’s a massive gem that heals you for 1d4+3 hp PER ROUND. INFINITE HEALING! Yay! -.- Granted, it is relatively fragile for an artifact (hardness 15 + 200 hp, also regenerates 2 hp per round – good luck trying to destroy it…), but yeah – this artifact’s healing CANNOT be negated.

It gets worse. It doesn’t even have a slot, and weighs 60 lbs. and imposes a whopping -1 penalty to atk and Dexterity-based skills (which makes no sense for the aurunglyd, but isn’t represented in the statblock anyways…) – for INFINITE HEALING. Oh, the weight? That’s seriously NOT a significant drawback. I mean, come on, even in old-school games, any fighter at this level worth their salt can juggle stuff like that.

It gets WORSE. The area the aurunglyd is fought in? It has really nice environmental hazards etc. – which is cool. However, it also has an upwelling pool that grants the aurunglyd fire resistance 10.

Let’s take stock, shall we? Melee pretty much means DOOM and death if attempted; Good luck with your 5th to 8th level fighter/melee dude trying to not get squished and absorbed by the thing, even prior to it spawning servitors.

One of the two improperly functioning means to deal persistent damage to the critter still has fire resistance 10 to overcome. The other is rarer. Beyond this, we STILL have 5 to 7 hit points regenerated per round. Oh, and the thing has AC 26. It’s not even easy to hit.

“But endy”, you say, “this is an old-school module! Combat is a problem-solving exercise!” Yes, you’d be correct. However, the module gives the party the finger for going the burn-it-all-route – it doesn’t work due to the body of water and artifact, even if the GM increases the pitiful damage that natural fires tend to inflict in PFRPG.

Not even a thoroughly optimized party has a good way to deal with the artifact. Worse, the artifact and the part of the thing that holds it? Submerged in the pool. Can you see *any* party, even the best-optimized murder-hobo 25-pt.-buy party get in the pool and beat this? No? Well, there’s a reason for that. You can run this module with MYTHIC characters and TPK them. I kid you not.

Then again, stronger characters will trivialize all but the final encounter.

Know what this boss fight is? It’s the most brutal DPR (damage per round)-test I’ve seen for the system, and one that is woefully lacking in actual calibration. All the pieces are in place, and yet, the module screws it up.

Editing and formatting are very good on a formal level; on a rules-language level, the module is utterly wrecked in a couple of key aspects, which render it unbeatable for the level-range if run RAW. Layout adheres to the series’ two-column b/w-standard, with nice b/w-artwork. The b/w-cartography deserves special mention, as the presence of player-friendly maps is a big plus. The pdf comes fully bookmarked.

Urgh, this review was even more frustrating for me to write than the one for “Awakenings”, because “Nightstone Keep” (EDIT: This used to read “Nightfall Keep”; that’s what I get for listening to Blind Guardian while writing the review…) is even closer to actually, you know, working. Ed Greenwood manages to evoke a sense of slowly creeping dread and dilapidation; I *love* creature ecologies like this, and I wanted to love this module; I got ready to sing its praises, and was happy – and then, the  final boss fight degrades this module from a Quest of Doom to a doomed quest.

For comparison: Even super-deadly LotFP-modules tend to be fairer: Burning all in “Death Love Doom”? Totally valid. Ridiculous attention to detail in “The Grinding Gear”? Pays off. Here, though, the party can’t win with either optimization or clever play – only by beating the DPR-challenge posed, with RANGED options, mind you. The module explicitly discourages smart play and non-combat strategies, which runs contrary to the spirit of old-school modules.

Now, if your party invested their resources primarily in electricity damage, they *might* triumph. *Might* – provided they realize how the fight works from the get-go. Because otherwise, the frontline fighters will die, leaving the squishy casters to their doom. I wasn’t joking when I said that this module can kill off MYTHIC characters.

I’m not sure if Anthony Pryor just botched the conversion, or if the other iterations of the module are as broken as this one, as I don’t own them. It’s evident that this wasn’t playtested, at all, and that nobody checked the math for the level-range.

How to rate this, then? Well, it’s a great, creepy, escalating dark fantasy/horror module – up until the utterly RIDICULOUS final boss DPR-test. It can be fixed and made into a 5 star-experience with relative ease – ignore the frickin’ broken artifact (which should NEVER fall into player hands anyways) and eliminate or slow the regeneration the boss has. Ideally while also tinkering with the ridiculously over-CR’d final boss, rebuilding the statblock for a tough, but manageable CR in the vicinity of 10, with a focus on high Constitution and staying power.

…but I can’t rate that. I have to rate what’s here. And what’s here is a great case for how small errors and a lack of checking of a game’s math can utterly destroy what would have been a great yarn. It can be salvaged, though. And I am genuinely too lenient here. But I can’t bring myself to rate this as low as it frankly deserves. After all, it can be fixed with relative ease…which is the only reason I can justify giving this module 3 stars; mechanically, it’s a 1-star failure, but if you’re willing to fix the finale, you can have serious fun with this.

I do not own the 5e-version, but you can get it here.

Similarly, I don’t have the S&W-version, but you can find it here.