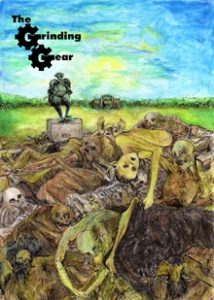 This module clocks in at 29 pages, 1 page front cover, 1 page editorial, leaving us with 27 pages of content. However, the maps are 4 extra pages in a separate pdf and the module also comes with a handy 3-page GM-cheat-sheet. With the exception of the maps in the separate pdf, these pages generally are formatted for an A5-paper-size (6” by 9”), which means you can fit up to 4 of the pages on one A4 sheet of paper, though your eyesight should be good if you opt for that option.

Okay, this module is called “Grinding Gear.” It’s penned by James Edward Raggi IV and is released by LotFP. From the cover, I expected a meat-grinder of epic proportions and indeed, the introduction seems to confirm that – the author talks about failure to gain the final treasure being a real option. But…is it really so nasty? Well, I’ll answer that in the conclusion, but to prevent false expectations: This module expects you to track rations, light sources, encumbrance. These aspects *DO* matter herein and greatly influence whether or not you’d call this fair – the author makes sure that you should convey that to the players and not suddenly make these matter when they never mattered before. If you’re like me and have a healthy leaning towards simulationalist gameplay and emphasize consistency in the world…well, then this can be played pretty much in sequence. I’d strongly urge Referees itching to run this to start enforcing these hard equipment tracking rules before beginning this module. Similarly, if your players have a bad attention span and don’t make notes, this module will chew them up and spit them out, but notes (or even a good memory!) will certainly be sufficient to prevail. One more note: The cover may be macabre, but the contents of this are very much PG 13.

All right, and this is as far as I can go sans diving into SPOILERS. Potential players should jump to the conclusion.

All right, only referees around? Great! So, while the cover with its massive array of corpses looks like one malevolent place and while it does feature prominently in the grounds of the dilapidated inn that makes up the first area for the PCs to explore: The corpses seem to litter the statue in pretty much a 20-ft.-radius and thus already provide a kind of hint regarding the diameter of whatever effect killed the beings. Similarly, closer examination will should the tell-tale signs of needle-like injuries and the beings seem to be pretty bloodless. You can probably find out where this is going – if not, let me spell it out for you: The statue indeed does contain the entry to the dungeon of Gavin Richrom, the creator of this complex.

Gavin at once loved and hated adventurers – he worshiped their wits and panache, but when he lost his daughter to an adventurer (who subsequently met an untimely end), he constructed this place. Opening the complex’ entry-level results in sleeping gas being dispersed in a 20 ft.-radius and the sound of the complex opening subsequently will attract the massive swarm of mosquito-bats (aka stirges) that lair in the attic of the ruins of the inn.

But if the players are smart, they can’t only avoid exsanguination, they can also exploit this behavioral pattern to actually explore the otherwise pretty lethal attic of the inn. Speaking of inn, chapel, etc. – the patron saint of tinkers, St. McIver (Name could be easily replaced) does have a significance…as do other aspects. You see, if PCs are *really* thorough, they may actually end up finding a hint on the shingles of the very roof of the complex…and realize from the objects they can find in the ruin, that whoever lords over this place is obviously not 100% sane…

Now, while purging the aforementioned stirge-like creatures is perfectly feasible, the PCs should conserve their resources, for they still need to explore the dungeon. It should btw. be noted that, time and again, notes on plaques strewn throughout the dungeon very much make these aspects known – the very first room actually does note that the PCs (and players) must take care and carefully observe. The actual traps that litter the complex thus often do not feel like they are meant to destroy the PCs – instead, it feels like a twisted game between Richrom and the groups seeking to plunder his complex – think of it like playing through a dungeon made by The Riddler or the Joker, minus their leitmotifs, obviously. Suffice to say, the complex as such features traps that range from “You die!” to “Hand turns blue” – and the severity usually is tied well to the actions preceding it. Lack of caution does not necessarily get you killed, but observation will get you further: Determining e.g. the effects of a specific magical light in conjunction with the hint on the roof can yield further information and allow further progress into the complex – though hostile adventurers who just want to get out already make sure that this is not for the faint of heart.

Here’s the paradox – the module tells PCs, for example to NOT enter an underground chapel – and indeed, the associated trap, which raises the floors of several pits, each of which contains a potentially TPK-strength foe, is nasty. However, the PCs will have to play the game – i.e. deduce how to enter it, disarm the trap…or go for the “take stuff and run approach” – and yep, the powerful critters are telegraphed ahead of time. This is not unfair. Similarly, the handout player map of a pat of level 2 constitutes an interesting fake lead – one which may make PCs actually abandon the quest if they’re not diligent enough.

Risk and reward, in short, come hand in hand and the ability to determine when it’s prudent to risk your life and when it’s just stupid… that’s pretty much what this module is all about, gaining that almost sixth sense, if you will. For example, braving a potentially very lethal rock-paper-scissors-themed trap can be an epic experience and result in an interesting enlightenment. Ultimately, the PCs will, by some means, whether it’s a wall or deadly critters, be incapable of leaving the place – which is exactly why rations, torches, etc. become so important.

Similarly, e.g. a magical organ and deducing the mindset of the dungeon creator very much become important – in order to find the true tomb (not the false one on the handout…), the PCs will have to pass several puzzle rooms, in which slots will require the spelling of the proper answers – and it is here that careful exploration is rewarded, for one question would indeed be how many idols of St. Iver there are in the tomb. While some of them can be brute forced, as a whole, adventurers who are sloppy (much like the ones who got Richrom’s daughter killed) may thus end their careers early, entombed alive, sans an idea to beat the dungeon. On the other hand, if the PCs did their job well, they may well find the true tomb – but once again, the ability of the PCs to get proper loot out of it (beyond the basics) is contingent on observation and carefully acting – rushing players may see parts of their reward crumble to pieces before their eyes…

Editing and formatting are very good, I noticed no serious hiccups. Layout adheres to a 1-column b/w-standard and is pretty printer-friendly. If your eyesight is pretty good, you can fit 4 of these 6” by 9” (A5) pages on one sheet of paper. The pdf does sports some nice b/w-artworks in the same style as the cover. The supplemental material and maps are decent and do their job appropriately. Two thumbs up for getting both a letterpack and an A4-version of the pdfs. The pdf comes fully bookmarked for your convenience. I can’t comment on the print version, since I do not own it.

James Edward Raggi IV’s Grinding Gear is an amazing, challenging module that basically takes the play mode and assumptions of playing an investigation, the attention to detail, calculated risk-taking etc., and applies that to the genre of dungeon-crawling. The puzzles herein are fairer than those featured in pretty much most adventure-games and the means at the PC’s disposal to deal with the challenges in the book mean that, as a whole, this can be considered to an all-out amazing dungeon for groups looking for a challenge.

It also, by virtue of its design, rewards you for thinking along, for not just tuning off. In short, this is an extremely rewarding, difficult, but fair challenge of a module, one that is much fairer than its title may suggest. Now yes, this can result in nasty deaths…but similarly, it never really requires just luck to defeat anything. Similarly, it challenges, since they mostly hinge on player competence rather than character competence, also mean that it can be converted VERY quickly and that it similarly can be run sans issues for a diverse set of levels, even beyond the official recommended range of 1 – 4. At 5th level, some aspects start lose their danger, though, so if you believe you need to water this down a bit, that’s an option as well!

This is, in short, a glorious module that challenges players and PCs alike. Well worth the price of admission, this receives a final verdict of 5 stars + seal of approval. If you’re looking for a module that requires brains AND brawn to defeat, get this gem!