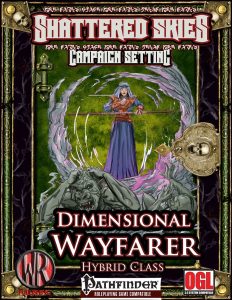 This hybrid class clocks in at 15 pages, 1 page front cover, 1 page editorial, 2 pages of SRD, 1 page back cover, leaving us with 10 pages, so let’s take a look!

The dimensional wayfarer class’ chassis nets d8 HD, 6 + Int skills per level, proficiency with all simple and martial weapons + one exotic weapon of their choice as well as with light and medium armors, but not with shields. The class gets a 3/4 BAB-progression as well as good Will-save progression and learns to cast spells spontaneously, with Wisdom governing (slightly uncommon) this type of spellcasting,, which is, fyi, drawn from a custom list. And here we begin with a big issue. The spellcasting notes that he casts a “mix of divine and arcane spells” – all right, I’ll play. Does arcane spell failure affect them? Yes? No? Only those originally drawn from arcane lists? No frickin’ idea.

The class begins play with planar channeling, which means they can channel baneful energies against creatures with the extraplanar subtype and can only harm, with a progression analogue to the cleric’s channel energy. Weird ” A dimensional wayfarer can use this ability a number of times per day equal to 3 + his bonus for the relevant ability of the spellcasting class he selected.” Thing is – the class does not select anything, which makes me believe that this is a remnant from a previous version in the design process.

Also at 1st level, the class gains a planar guide benefit – that would be favored enemy, favored terrain or terrain mastery for a previously chosen favored terrain. Only a previously chosen favored terrain qualifies for terrain mastery, with other planes being the focus here. +1 of the planar guide abilities is gained every 3 levels thereafter and they do not scale at later levels. The other first level ability lets them 1/day use dimensional knowledge (+1/day at 3rd level and every odd level thereafter) – using it requires a Knowledge check, with the precise knowledge depending on creature types and a range of 60 ft. For 10 by which the check is succeeded, the bonus granted is enhanced. At first level, this nets an atk-bonus, with 5th level unlocking save-bonuses and 9th level 1d6 bonus damage. Weird: The second one has a maximum range of 60 ft., whereas the other two don’t have a maximum range. I assume the “allies within 60 ft.” -AoE should pertain to all three. At 13th level, the dimensional wayfarer may single-target a foe who is then dazzled; higher DCs can net daze and stun – and I’m good with no save here; it’s a limited ability and temporarily stunlocking a foe at this level is okay with me. 17th level provides once again an AC-boost for allies, though oddly, here the range is 30 ft. Oh well.

2nd level nets Spell Focus (abjuration) as a bonus feat as well as counterport – that is basically a means of conjuration spells counterspelling via any spell of the school qualifying. 5th level nets Spell Penetration as a bonus feat. (Feats are btw. not properly capitalized.) 6th level nets a +1 sacred bonus vs. outsider spells, SPs, Su and Ex saves and increases the spell save DC, Ex, su, etc.-DC and Cl versus such targets, +1 for every 6 levels. 6th level nets 1/day teleport as an SU, lacking the CL for ability interaction. The character also gets SR 5 + class level to resist the effects of dimensional locks and similar spells and abilities. Nope, spells not italicized. 12th level adds greater teleport or plane shift and increases said SR to 10 + class level. Weird: Cut-copy-paste remnant “This replaces planar mastery.”

8th level becomes a bit problematic, adding the wayfarer’s choice of panicked, sickened or staggered to creatures who fail versus the wayfarer’s channel energy…that’s a pretty strong save-or-suck at 8th level, in spite of its limits. 10th level nets commune as a 1/day SP, + 1/day every 4 levels thereafter. 14th level increases the counterportation capability as an immediate action and in a nice ability-interlock, two uses of planar channel can be expended to return an escaped critter – very cool! That being said, it imho could have been a bit clearer in that it also inflicts planar channel to the target – the ability is understandable, the sequence of its presentation is not too elegant, though. 16th level adds no-save banishment of outsiders and 19th level makes the teleport etc. 1/hour as well as 3/day astral projection, etherealness, gate, teleportation circle. The SR is upgraded to a base value of 15 + and, oddly, once again features the replace-angle-remnant.

The capstone adds further damage to creatures redirected. Beyond the spell-list of the class, the pdf also contains several spells. These contain some spells from rite Publishing’s 1001 Spells as well as other sources – a chaotic bolt cantrip, a viable variant of dimension door – per se a solid addition to the class.

Editing and formatting are better than in previous Wayward Rogues Publishing-pdfs. They are still not at a point where I’d consider them good, though. There are both formal and rules-language hiccups here. Layout adheres to a nice full-color two-column standard and the interior artwork is solid stock art. The pdf has no bookmarks.

Robert Gresham’s Dimensional Wayfarer is the best of the early hybrid classes he penned; while it is a Frankenstein-entity of cleric, planes walker PrC and arcane caster, its combination of tricks does have some potential. It is not a class that will necessarily blow you away and feels slightly unfocused at times, but in contrast to previous hybrid classes, it feels more like a cohesive entity, rather than just components smashed together. The distribution of abilities is nice, though the formatting and ccp-hiccups are jarring and detract from the pdf. That being said, I can see this appeal to someone who looks for the concept of a planar traveler/anti-outsider caster and it represents somewhat of a turning point for Wayward Rogues-classes. It gets better. The unresolved question of spellcasting as a basic mechanic does shoot down a core feature of the class, though, which is the main reason I cannot round up from my final verdict of 2.5 stars.