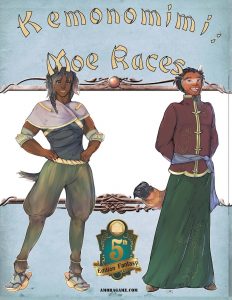 The D&D 5e-conversion of the Moe Races clocks in at 13 pages, 1 page front cover, 1 page editorial, 1 page of SRD, leaving us with 10 pages of content, so let’s take a look!

“When the kami placed their thumbprint unto the forehead of man, breathing life into the husks of flesh, they wept tears of sorrow. Looking upon their children playing upon the ground, rolling in the fields of grass and running alone through lush tracks of wilderness, the Kami felt the hollowness of the human heartbeat, thumping alone.” This is the beginning of the legend that talks of the creation of the kemonomimi, and it is but the beginning of a rather flavorful origin-myth, which continues to provide an interesting look at the respective sub-races of kemonomimi, all of which receive their own entry.

For those among my 5e-favoring readers concerned about conversion and detail, it should be noted that the racial entries mirror those in the PHB – that is, we get ample of flavor text as well as suggestions for which class to choose. The Akaimimi (red panda) increase Wisdom by 2 and Constitution by 1, are Medium, have a normal speed and gain darkvision as well as animal affinity towards red pandas and similar beasts – all kemonomimi-subtypes receive the affinity for their respectively aligned animals, just fyi. Similarly, they all have darkvision 60 ft.

Akaimimi may cast augury as an innate spell, recharging that on a long rest, with 10th level adding 1/week divination. You can spend this augury to ask questions to perform a specific task, granting benefits equal to guidance to yourself or another when performing it. Nice one! The race may also choose Arcana, Hisory, Nature or religion to gain proficiency in.

The araiguma (raccoon) kemonomimi increase Con by 2 and Int by 1, are Medium and beyond the standard kemonomimi abilities, they gain proficiency in either thieves’ tools or Slight of Hand and may determine the next source of water as if using locate object. Similarly, they may purify food by washing it in fresh water, as the ritual. Nice.

The Inumimi, the dog kemonomimi, increase Strength by 2 and Wisdom by 1 and gain proficiency in Handle Animal or Survival in addition to the usual animal affinity and darkvision. The inumimi gain advantage on saves versus curses, hexes and similar abilities that bring bad luck and extend this benefit to adjacent allies. The fox-like Kitsunemimi increase their Intelligence by 2 and their Dexterity by 1 and may choose either Insight or Perception proficiency-wise. Their unique ability beyond the basics would be cunning planner: During a short or long rest, the character can plan for a specifc situation defined as either the kitsunemimi taking a declared action to affect a designated subject or such a subject taking an action against the kitsunemimi. Upon the conditions coming into play, you can add +1d4 to a relevant roll. The ability can be changed condition-wise in a short rest if not triggered; if triggered, it requires a long rest to recharge. Pretty cool!

The Nekomimi (based on cats, in case you’re Japanese is rusty) increase Dexterity by 1 and Charisma by 2 and skill-proficiency-wise may choose either Athletics or Acrobatics. They may reroll a single dice roll, with a long rest to recharge. Tanukimimi (you guessed it – based on tanuki) increase Con by 2 and Cha by 1 and choose either Stealth or Survival as proficiency. As a bonus action, they can grant themselves character level + Constitution bonus temporary hit points, with a long rest to recharge.

The ahre-based Usagimimi receive an increase of Dexterity by 2 and Wisdom yb 1 and gain proficiency of a tool of their choice and one additional language and take only half as long to learn the use of either. They can perform the Dash, Disengage, Dodge or Search actions as a bonus action. Alternatively, they may use a bonus action to attack with a weapon they made themselves. This ability recharges after a short or long rest.

Editing and formatting are generally very good, though the respective ability-headers are not italicized. Layout adheres to a pretty printer-friendly two-column full-color standard and the pdf sports nice and cute artworks for the respective Kemonomimi. With the Nekomimi as an exception, the artworks have to my knowledge not been used in pdfs apart from the other editions of this book, which is fair game. The pdf has no bookmarks, which constitutes a minor comfort detriment, though they are not required at this length.

Wojciech Gruchala and Greg LaRose deliver a more than solid, well-made conversion of the kemonomimi to 5e here. The balance of the respective races is on par with the races of the PHB and every type of kemonomimi herein does have at least one unique trick that sets the race apart. It’s also nice to see that the animal affinities for more combat related critters (dogs and cats) have obviously influenced the balancing of the respective races. As far as I’m concerned, what’s in here is pretty internally consistent, with the usagimimi’s pretty powerful skittish bonus action tricks making up for the relatively subdued crafting aspect of 5e in comparison to PFRPG.

In short – this is pretty much an excellent example on how to make a good conversion. Much like its PFRPG-brother, the pdf only covers the base races, though. Supplemental material cannot be found herein, we just get the nice fluff and the similarly nice races. As a whole, this is worth getting and can be considered to be a solid addition to 5e-gaming. My final verdict will clock in at 4 stars.

You can get these nice races here on OBS!
Endzeitgeist out.