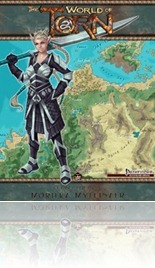 This pdf from Torn Worldis 13 pages long, 1 page front cover, 1 page editorial, 1 page ToC, 2 pages SRD and 2 pages of advertisement, leaving us with 6 pages of content, so let’s check this out!

As with the other character-pack offering by Torn World, LaCroix, we get 3 different incarnations of Morieka: At age of 90, this elven woman is a competent fighter (CR 5), but has been overlooked time and again for promotions due to her rambo-esque attitude – in spite of her martial prowess with her greatsword.

At age of 108, Morieka, she has grown out her rebellious phase and joined the elite cadre of Molas Saedi at the behest of the leaders of the legendary leaders of said brotherhood. She has become a fighter 6/Molas Saedi 5.

At the age of 208, she has gone into hiding due to the fact that the Molas Saedi have been pronounced traitors – living a covert life as a town blacksmith and with family, she nevertheless keeps tabs on her Molas Saedi brothers and sisters. She is now a fighter 10/Molas Saedi 5.

The last two pages of the pdf are devoted to the Molas Saedi PrC – if you’re interested in my thoughts on it, check out the review of LaCroix, I went into all details there.

Editing and formatting could have been better – the otherwise solid prose has one or two hick-ups and I noticed a formatting error regarding bold letters. Layout adheres to a full-color two-column standard and the artworks deserve special mention: The younger two incarnations of Morieka get their own mug-shot b/w-illustrations and her grown incognito version a full-body shot in blacksmith’s garb and full color – all of the artworks being of top quality. The pdf has no bookmarks, which is a bummer.

I like the notions and nomenclature of the Torn World characters, however, Morieka suffers from multiple problems: For one, she is not as complex or cool a character as LaCroix. Secondly, regarding internal consistency, her name adheres to completely different standards the LaCroix’s, although she’s also an elf and a Molas Saedi. Third, the Molas Saedi PrC, while nice, has already been featured in LaCroix’s pdf. And then, fourth, we have another problem: Her build. It’s just BORING. Every DM can create a level 10 character and slap some PrC-levels on it. When compared to Rite Publishing’s “Faces of the Tarnished Souk”-series and its exceedingly complex characters at the same price, Morieka almost feels insulting. The other benchmarks, the latest offerings by TPK Games’ Infamous adversary-line also prove to be vastly superior in terms of bang-for-bucks and concept of the characters. Morieka and future builds in this line need archetypes, templates etc. – something that sets them apart. Don’t get me wrong – her character is nicely developed and I love seeing the individual fluff for her different incarnations, but that’s simply not enough to carry here when we take a look at what other 3pps offer. Her artworks is excellent, though. I’d usually go for 3 stars on her…BUT. But I’ve rated 3 stars some other files in the IA and FoTS-series that are superior to this one in almost any way. Thus, I’ll settle for a final verdict of 2.5 stars, rounded down due to glitches, lack of bookmarks etc. to 2 for the purpose of this platform.

Morieka Myleisaer: A Torn World Character Pack is available from: