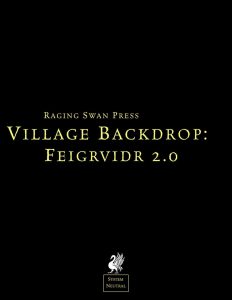 The system neutral expanded 2.0-version of the supplement depicting the village of Feigrvidr is 15 pages long, 1 page front cover, 2 pages of advertisement, 1 page editorial/ToC, 1 page SRD and 1 page back cover, leaving us with 9 pages of content, so let’s take a look at the settlement!

Prosperous and notorious, Feigrvidr’s populace may seem rough and tumble, but there is both gold and glory to be found in this remote place. Somewhat to my chagrin, the helpful settlement statblock information present in the original iteration has been stripped here – particularly in this settlement, having it helped judge how dangerous the place is supposed to be. On the plus-side, the section that deals with life in Feigrvidr has been properly expanded, now also sporting e.g. a little paragraph on customs and traditions. On a nitpicky side of things, the dressing/event table has not been expanded as usual for the 2.0-versions: We still have 6 of those, even though the table implies that there’d be d20 of them due to a cosmetic glitch. Speaking of minor drawbacks: In this system neutral version, we do not get a proper marketplace section of magic items for sale.

Speaking of middens – here, a cool bit of quasi-realism blends with the fantastic, for the folk of Feigrvidr have bred challenge 2 pygmy-otyughs (fully statted!) to deal with refuse…but they tend to breed fast and true and swarms of them can be found there and the locals whisper that they also are the reason bodies of the thane’s enemies tend to never be found… The statblock provided lists movement in feet (3’’/swim 12’’) in the small scale, lists HD and treasure types, as well as general Intelligence ratings and psionic abilities, but no morale. AC is noted only as descending, and while the special defense “never surprised” is self-explanatory, some additional elaborations on the disease special attack would have made sense. All in all, this is, by far, my least favorite iteration of the pygmy-otyugh. Even if you usually prefer the OSR/system neutral versions, it might be prudent to extrapolate your own build from the 5e or PF2-iteration, if you’re so inclined.

In case you haven’t noticed: This village’s 2.0 version has been expanded SIGNIFICANTLY in comparison to the original PFRPG-iteration: We get 6 very detailed fluff write-ups for the crucial NPCs here, all of which go into much more detail than usual for the like, and the supplement’s final page provides 3 additional write-ups for less crucial NPCs – these are stat-less as well. Slightly odd: Raging Swan press tends to put NPCs against a grey background, but doesn’t do so on the final page. Considering that the whole page would consist of the gray boxes, this decision does make sense, and it almost certainly intentional. The stats properly reference old-school classes.

Feigrvidr 2.0 is a great village, and it should be noted that all my niggles are ultimately me being super picky. That being said, while I loved the inclusion of stats for the pygmy-otyugh, I was somewhat disappointed by them in this version. They do their job, but nothing more than that. And in a settlement that otherwise brims excellence, that’s a pretty big drawback. That being said, even considering that, I just can’t bring myself to round down from my final verdict of 4.5 stars here. The settlement is simply too cool. Still, if you have some experience with more complex systems, I’d recommend those iterations over this one.