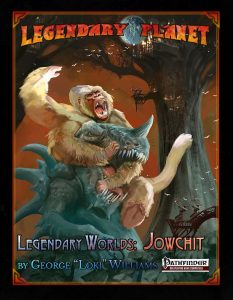 Jowchit is a mostly subtropical planet in relative proximity to its sun, with endless rainforests sprawling, jungles and rivers, lakes, etc. – it is a green world and sports the clearest blue sky you can find anywhere but the elemental plane of air, with the largest metropolis situated atop the Hoopaka mountain range, and vanara, garil and girallons as the major species: Speaking of which: Jowchit’s girallons are highly-sophisticated (garil), and come with a CR 9 statblock for the jowchit girallon, as well as with a write up for the garil as a playable race.

The garil are Monstrous humanoids with darkvision 60 ft., a 20 ft. climb speed and if they win you over with Diplomacy, you get a -2 penalty to resist their Charisma-based skill checks for 24 hours. They have a 10 ft. reach, in spite of being Medium, which is VERY strong (as a nitpick: sizes are capitalized) and they get a +2 racial bonus to resist enchantment (charm) and (compulsion) effects and gain an additional save one round later if they failed the first. They also get +2 Strength and Charisma, -2 Wisdom. The reach ability is rather strong for certain builds, and something that needs to be monitored for some builds, but as a whole, I am happy with these fellows. There is but one hiccup here that makes the race seem less neat than it is: The write up lists a 2 HP-line, which was probably a cut-copy-paste oversight from SFRPG (which would also explain the very strong reach, as melee is less valuable in SFRPG than in PFRPG); another indicator for this would be that none of the racial abilities sport the (Ex) or (Su) classifications that Pathfinder has for most, though not all, of these traits. That notwithstanding, the race is fully functional and should provide no issues in PFRPG. If you need to nerf the race for your game, consider granting them the Lunge feat with a limited amount of daily uses until 5th level, where you take away that delimiter. To cut a long ramble short: Not perfect, but perfectly usable.

Now, in most instances, civilization would have never managed to get past the nomad/hunter/gatherer-stage on the planet. Why? Well, Jowchit is essentially Kaiju country, sporting more than 50 of the titanic monstrosities. Only when Kongarrath, an oracle sharing a bond with the white-furred titanic kaiju resembling a girallon (see cover) Zaiz showed up, could a vision of civilization be properly realized. A curtain of lights, the Aurora Prismatica that repels most kaiju, and Zaiz were both instrumental in establishing settled civilization in this world of titanic masters. And yes, the aurora actually has a tangible mechanical effect. The book then proceeds to walk you through the mountain range known as “Bones of the World”, and in a surprising attention to detail, the massive trees of the Deep Green get game-relevant information! The Deep green, which should come as no surprise, is also an incubator for a variety of dangerous diseases, and from the glade of delirium to the ratfolk monastery and the dinosaur graveyard, this hits tones exceedingly well.  The footprints of the legendary first kaiju Jira also host a variety of adventure locations, including a purple-vined island that hosts undead dinosaurs, and a weird place featuring octagonal tunnels. These locales are top-tier as far as I’m concerned – they really got my brain going regarding unique vistas and adventure ideas. Did I mention the rogue free-spirited formian bard NoOne?

Speaking of bards: The book does contain a new bard archetype, the Apostle of the Green, who replaces bardic knowledge with +1/2 class level 8minimum 1) to Knowledge (nature) checks, which may be used untrained. The archetype also gets an untyped +2 bonus to Climb checks. The skill referenced is not properly capitalized here. The bardic performance of the archetype applies to plants as well, explicitly bypassing their immunity to mind-affecting effects with their bard spells. (Kudos for keeping that properly tied to class!) When gaining new spells, these fellows can choose from the druid or ranger list – as a nitpick, I think the archetype should specify how to operate when one spell is of a lower level on the ranger’s list than on the druid list. Ideally, the higher spell level should be used, as ranger spells can be rather potent. The archetype does lose countersong for this, though. Instead of inspire competence and dirge of doom, we get the song of the green: This is a bardic performance that entangles all but caster and Wisdom bonus allies in a 30 ft.-radius, allowing them to execute some pretty consistent and potent soft terrain control – like it!

Two cities are covered as well, both providing a lot of evocative ideas, but neither have settlement statblocks. The topic of religion is also covered in detail, and we have more rules-material: The book contains three drugs: Kaiju’s Breath nets a +4 untyped bonus versus fear and emotion effects; Kajarah nets you Kaiju Link as a bonus feat for 24 hours, and Vog provides fire resistance 5. The drawbacks and addiction danger correlate well to the power-level of the benefits granted, rendering all three of them welcome additions to the game. Jowchit comes with a proper breakdown of the environmental traits of the planet regarding global rules, with temperatures noted in °F; ideally, I’d have seen a value for °C here as well.

But I was mentioning that feat, right? Well, there are 7 new feats in the book: Greensage nets you +2 to Knowledge (nature) And Knowledge (arcana), which upgrades to +4 at 10 ranks in one of the skills. That’s filler. Greensinger does not properly capitalize the skills in the prerequisite line, but lets you choose druid or ranger spells instead of bard spells – basically the feat-version of the archetype feature. While kept behind 5 ranks, I do think the existence of this feat diminishes the archetype; if in doubt, I’d cut that feat. There also is the Lore of the Great Beasts feat that nets you a +4 bonus to Knowledge (arcana) checks made on Kaiju. That’s super-specific, and should probably have some additional benefit, or a reduced bonus and be a trait. Kaiju Sense lets you 1/day per Wisdom modifier determine the direction and distance of all kaiju within 5 miles. Really cool…but technically, it should probably list a prerequisite Wisdom that actually makes sure you have a Wisdom modifier to use the feat, you know. Or a (minimum 1) caveat. Otherwise, the feat could be rendered a useless “dead feat.” Kaiju Link provides an upgrade for one kaiju chosen – you are aware of the kaiju in a 10-mile radius. Kaiju Caster lets you 3/day add +4 to CL checks to overcome SR, and if it’s from the destruction domain’s list, you increase the damage die size. Minor nitpick: This should probably note that it’s used as part of spellcasting. Craft Kaiju Power Component does what it says on the tin – and should probably have the (Item Creation) descriptor, but that’s a cosmetic nitpick. And yes, we get general guidelines for use of kaiju pieces as power components for spells, which is pretty neat!

The final 2/3 of a page provides 3 well-crafted and interesting adventure outlines , in case the inspiring text didn’t do the job yet; hint: it’ll suffice, but there most assuredly are neat ideas here as well!

Editing and formatting are good on a formal and rules-language level: While there are some nitpicks and issues to be found, none are truly structural issues that compromise the ability to use the supplement, with the racial traits of the garil being the one thing I can see rubbing some people the wrong way. Layout adheres to the series’ two-column full-color standard, with quite a few pretty awesome original pieces. The pdf comes fully bookmarked for your convenience.

There is a strange divide going through George “Loki” Williams’ Jowchit – on the one hand, we have a fantastic vision of a planet that makes sense, that is plausible and interesting in many ways; the GM-facing aspects of the supplement, including environmental effects, drugs, and the writing that pertains to the setting, is fantastic. On the other hand, the player-facing materials, particularly the feats and the racial stats, feel almost as though they had been written by someone else. The feats include ones that were considered to be filler back in the 3.X days (+2 to two skills – oh joy), and frankly, I didn’t like any of them, save the two that let you sense kaiju; these have a narrative justification, and can be super-rewarding, particularly if used for NPCs, or when running a campaign on Jowchit. And, like the best installments in the series, I can genuinely picture myself doing that.

Jowchit is a fantastic world, and if you’re even remotely interested in the concept, I strongly recommend getting this supplement.  If you’re in it for player-facing material, you’ll be less enamored with this booklet, granted…but it’s a setting supplement, and in that regard, it’s certainly a resounding success. While the aforementioned gripes make it impossible for me to rate this booklet the full 5 stars, this does get 4 stars and my seal of approval, for this vista is both fantastic and exceedingly exciting.

You can get this inspiring planet here on OBS!

Need some Kaiju? Rite Publishing has you covered – you can find the Kaiju Codex here on OBS!

Everybody Games has even more Kaiju! You can find the kangaroo-like Terragaru here!

While my review is based on the PFRPG-version, there is a SFRPG-version as well. You can find it here!

Kaiju for SFRPG? Everybody Games has some! You can find them here, and here!