Faerie Tales from Unlit Shores – Creeping Beauties of the Wood 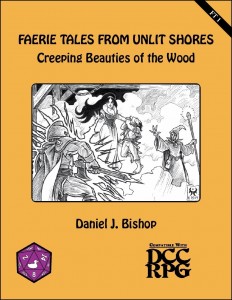 This module clocks in at 49 pages, 1 page front cover, 1 page SRD, leaving us with 47 pages of content, so let’s take a look, shall we?

This being an adventure review, the following contains SPOILERS. Not only for this module, but also for its direct predecessor, the ennie-nominated, superb Prince Charming, Reanimator. Potential players of either one should definitely jump to the conclusion. Really. You don’t want this spoiled.

Still here? All right! So, after being press-ganged into an adventuring-life by a non-too-friendly Prince Charming, the PCs were witness to the psycho reanimating a girl, only to have his still living head being removed by said undead bride, who subsequently escaped into the dreaded Grimmswood. Unfortunately for the PCs, the baron is no less charming than his heir apparent – the solution to his dilemma is obvious – those pesky commoners better get moving and bring back some stability to the dread wood. Being not as totally an utter prick as his eccentric son, though, the baron does promise a chest of gold as well as the hand of his daughter in marriage. Things become more complicated even – the PC’s bumbling interference has ended the faerie curse on the “ghost” of Doctor Chapman – who in fact in direct conflict with the Desert Faerie. This shadow war behind the scenes is further complicated by the interference of the Yellow Dwarf – who are what do these entities want? Only time (and more modules in this series) will tell!

Doctor Chapman manifests himself in the dreams of one PC, providing further assistance – he assures them that prince Hubert Charming’s now-undead brides still roam the forest and that they have been entwined with a dread faerie’s curse -all have to be defeated/saved – so it’s up to the PCs to venture into the hex-mapped, color-mapped Grimmswood to track down Cinder Ella, Snow White and Sleeping Beauty, preferably while not falling to their brides and grooms. Each of these minions have specific, unique abilities reflecting the theme of the respective original faerie tales through a mirror exceedingly and joyfully darkly.

Now the exploration of the Grimmswood is interesting in that haunting rhymes may provide much needed warnings for PCs – the detailed random encounters include stalking/animated apple trees, the Big Bad Wolf (including windstorm-strength breath), cowardly lions, talking owls, jabberwocks, strangling vines – the table alone is more inspired than a few comparable whole modules I’ve read! Elven players can receive their due mithral equipment in an organic, cool way on the sacred anvil of the forest. A goblin knight seeking a duel has increased prowess the more PCs enter the fray, rewarding honorable conduct in a rather interested scaling mechanism. The PCs may also find a severed head and incur either his wrath or boon while resting in a dilapidated ruin of an inn. Let’s hope the head is treated kindly, for he has an interesting clue to offer to the PCs (and his curse is dire!).

In Cinder Ella’s cottage, her wicked stepsisters, terribly executed back in the day, still roam the place, their wounds seeping still after all those years. Her mother is no-where to be found, but a blackened skeleton that may bless them, the fire-infused undead and the grimorie of the curiously absent wicked stepmother, made from the skin of infants, speak a rather obvious language – poor Cinder Ella did not have a jolly good time…even though the PCs still have to defeat the now undead bride – hopefully without her fire-control and own volatile nature setting the whole house ablaze!

A cenotaph devoted to forces both disgusting and malignant is hiding within the forest as well. Christina Rosetti’s poem (reproduced here), “The Goblin Market” also serves as a complex and iconic encounter – including the options to learn new spells by having body parts grafted to you, paying with reflections and dreams…and the option to be, alas, deceived. Wax servants, goblins whispering in your ear, vials from the fountain of youth, wondrous companions, eyes in jars – delightful and breathing what fey ought to be all about – this section alone would make for a superb source-book and a massive table makes running the place even easier/more versatile. Snow White is awaiting teh PCs in the confines of the mine of her erstwhile allies – and the vampiric, cold-themed bride and her hobyah-servants make for deadly adversaries. Oh well, if push comes to shove and the PCs have kept their eyes peeled, the reanimator serum they may have found could well save them…or inadvertently create an undead horror…but hey, no risk, no gain, right? Right?

After defeating the second of these brides, the good doctor will urge the PCs onwards to Sleeping beauty, the final challenge that awaits. But she may very well know all – for there is a hidden war going on between the talking owls and talking crows of the forest and one side is spying for the beauty… That being said, the PCs may still run afoul of the psychotic tin man-analogue, an unpleasant artifact marked by X (NOTHING good’s ever marked by Xs…) or the dread undead guardian of the crossroads before they find the caverns that hide both Sleeping beauty and what remains of prince Hubert – i.e. his reanimated head…and an array of severed, spellcasting hands. Ending his undying existence in the otherwise gorgeous caverns (including crystalline flowers…), the PCs now “only” have to tackle Sleeping Beauty. Alas, she has grafted her parent’s heads and limbs to her bodyy, rendering her a deadly shredder of just about anyone, provided the PCs were not smart enough to deal with the other two brides before that…

Doctor Chapman as a patron is covered and so is Hizzgard, a dread demonic patron for all things creeping and crawling – who also comes with options to revive the dead via worms and an alchemy of essential salts. Finally, an appendix for quick and easy faerie animal generation is provided.

Editing and formatting are top-notch, I noticed no significant glitches. Layout adheres to PDG’s printer-friendly two-column b/w-standard with cool pieces of original b7w-art. Additionally, full color cartography, also provided as DM and player-version high-res jpgs help running this module. The pdf, alas, has no bookmarks, but I’d suggest to print this out anyways – it belongs to the shelf containing the good modules.

Okay, I’ll say it outright – at this point, Daniel J. Bishop is pretty much one of the few adventure-writers I’d buy blind. I adore his absolutely, mind-bogglingly compelling prose, the depths of his imagination and the sheer wonder each and every supplement of his exudes. The first FT-series module was great – this is one step beyond. Fairy Tales, reimagined through a glass most darkly, but at the same time, suffused with an underlying sense of wonder and yes, humor even, this module is quite frankly absolutely superb in every way. How good is this? Well, you know how many good modules for PFRPG exist? I have more of them than I can ever conceivably play, but still – I sit down for these modules and convert them. And I never, ever regret the work. Now don’t get me wrong, I did play this one with its intended DCC-rules, but the thing is – no matter what your system of choice is, this module is worth every single second spend converting it. Whether 0e, 13th Age, D&D 4th or 5th edition – believe me when I’m saying that you NEED this beast, that you want to invest the time to play this in your system of choice. Its ideas, its glorious creativity both are that pronounced. This is one of the most compelling, dark faerie tales I’ve ever read, no matter the medium. Quite a lot of novels and short stories in the faery tale/mythpunk/whatever genres can’t stand up to the level of imagination herein. I guarantee that, with a modicum of system-savvy knowledge of DCC, even as only an idea-mine, this still is worth its price ten-fold. Get this masterpiece!

My final verdict will clock in at an unsurprising 5 stars + seal of approval.

You can get this superb module here on OBS and here on d20pfsrd.com’s shop!
Endzeitgeist out.