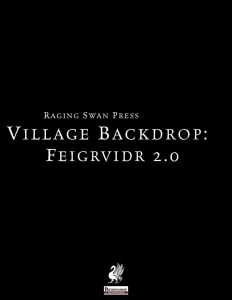 The expanded 2.0-version of the supplement depicting the village of Feigrvidr is 15 pages long, 1 page front cover, 2 pages of advertisement, 1 page editorial/ToC, 1 page SRD and 1 page back cover, leaving us with 9 pages of content, so let’s take a look at the settlement!

Prosperous and notorious, Feigrvidr’s populace may seem rough and tumble, but there is both gold and glory to be found in this remote place. Somewhat to my chagrin, the helpful settlement statblock information present in the original iteration has been stripped here – particularly in this settlement, having it helped judge how dangerous the place is supposed to be. On the plus-side, the section that deals with life in Feigrvidr has been properly expanded, now also sporting e.g. a little paragraph on customs and traditions. On a nitpicky side of things, the dressing/event table has not been expanded as usual for the 2.0-versions: We still have 6 of those, even though the table implies that there’d be d20 of them due to a cosmetic glitch. The marketplace section provides general guidelines, but no precise items for sale.

Speaking of middens – here, a cool bit of quasi-realism blends with the fantastic, for the folk of Feigrvidr have bred CR 2 pygmy-otyughs (fully statted!) to deal with refuse…but they tend to breed fast and true and swarms of them can be found there and the locals whisper that they also are the reason bodies of the thane’s enemies tend to never be found…

In case you haven’t noticed: This village’s 2.0 version has been expanded SIGNIFICANTLY in comparison to the old iteration: We get 6 very detailed fluff write-ups for the crucial NPCs here, all of which go into much more detail than usual for the like, and the supplement’s final page provides 3 additional write-ups for less crucial NPCs – these are stat-less as well. Slightly odd: Raging Swan press tends to put NPCs against a grey background, but doesn’t do so on the final page. Considering that the whole page would consist of the grey boxes, this decision does make sense, and it almost certainly intentional.

Even better, the 2.0-version of the village, in spite of the imho puzzling decision to cut the settlement statblock information, is definitely the version you should get. Why? Because it simply has so much more compelling content than the original! It provides more new content than most such 2.0-expansions/revisions, and I consider this revised version to be superior in almost every way. And yet, I couldn’t help but feel that, for this village in particular, the loss of the settlement statblock information can make it a bit harder on the GM, which is why my final verdict will hence clock in at 5 stars for the 2.0 version, losing my seal. Still, if you even remotely enjoy the concept, get it!

You can get this cool expanded edition here on OBS!