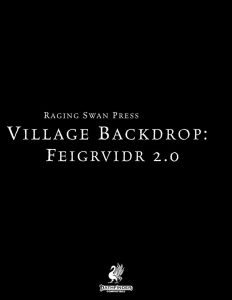 The expanded 2.0-version of the supplement depicting the village of Feigrvidr is 15 pages long, 1 page front cover, 2 pages of advertisement, 1 page editorial/ToC, 1 page SRD and 1 page back cover, leaving us with 9 pages of content, so let’s take a look at the settlement!

Prosperous and notorious, Feigrvidr’s populace may seem rough and tumble, but there is both gold and glory to be found in this remote place. Somewhat to my chagrin, the helpful settlement statblock information present in the original iteration has been stripped here – particularly in this settlement, having it helped judge how dangerous the place is supposed to be. On the plus-side, the section that deals with life in Feigrvidr has been properly expanded, now also sporting e.g. a little paragraph on customs and traditions. On a nitpicky side of things, the dressing/event table has not been expanded as usual for the 2.0-versions: We still have 6 of those, even though the table implies that there’d be d20 of them due to a cosmetic glitch. Speaking of minor drawbacks: In PF2, we do not get a proper marketplace section of magic items for sale.

Speaking of middens – here, a cool bit of quasi-realism blends with the fantastic, for the folk of Feigrvidr have bred CR 2 pygmy-otyughs (fully statted!) to deal with refuse…but they tend to breed fast and true and swarms of them can be found there and the locals whisper that they also are the reason bodies of the thane’s enemies tend to never be found… Unless I am sorely mistaken, the PF2-statblock provided has an error in its constrict ability – that should be 1d6+3, not 1d6+6.

In case you haven’t noticed: This village’s 2.0 version has been expanded SIGNIFICANTLY in comparison to the original iteration for PFRPG’s first edition: We get 6 very detailed fluff write-ups for the crucial NPCs here, all of which go into much more detail than usual for the like, and the supplement’s final page provides 3 additional write-ups for less crucial NPCs – these are stat-less as well. Slightly odd: Raging Swan press tends to put NPCs against a gray background, but doesn’t do so on the final page. Considering that the whole page would consist of the grey boxes, this decision does make sense, and it almost certainly intentional. One of these is a former champion with the paladin cause, and as such noted as ex-paladin; we also reference aasimar as a race here briefly, something to take note.

Editing and formatting are very good, I didn’t notice any serious glitches on a formal level, and only the one hiccup in the rules. Layout adheres to RSP’s smooth, printer-friendly two-column standard and the pdf comes with full bookmarks as well as a gorgeous map, of which you can, as always, download high-res jpegs if you join RSP’s patreon. We get pretty neat b/w-artwork. The pdf comes in two versions, with one being optimized for screen-use and one to be printed out.

Feigrvidr has improved significantly, and it already was a great supplement. It provides more new content than most such 2.0-expansions/revisions, and I consider this revised version to be superior in almost every way. The PF2-version is well-executed, marred only very slightly by the slight hiccup in the statblock, though not enough to deprive it of a final rating of 5 stars.