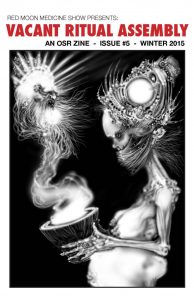 The fifth installment of the Vacant Ritual Assembly ‘zine clocks in at 24 pages, 1 page front cover, 2 pages of editorial/ToC and notes on recommended files/media, 1 page advertisement, 1 page back cover, leaving us with 19 pages of content, so let’s take a look. It should be noted that the pages are laid out in the standard 6’’ by 9’’ (A5) pamphlet style for many OSR-zines, which means you can fit up to 4 pages on a given sheet of paper – in theory. In practice, printing this one out yielded issues for all printers I used, which may be relevant to your interest. I am not penalizing the pdf for that, though.

All right, we begin with an article by Judd Karlman, depicting “Koster’s Knob” – a hobbit shire depicted in an INSPIRED and gorgeous two-page isometric map by Todd Gamble, with reasonably player-friendly annotations added instead of the annoying numbers that break immersion. The map may make this worth getting – and while it looks like something straight out of picturesque Tolkien, the place has a great twist: You see, the halflings here grow (pipe)weed. Halflings that venture forth are semi-shunned, called Kosterbacks…and there is a local slang word for wizards that settle down and refuse to leave. Think about how often that must have happened for that to develop! Iron cages where the shunned and doomed are left add another, slightly sinister angle to the latent, implied arch-conservative xenophobia, and indeed, ALL points of interest on the map get read-aloud text from locals, kosterbacks and such wizards, painting a vivid picture indeed. Sample stats, brief tables for criminals, encounters, etc. are included as well. A total winner! Loved this!

Fitting and supplemental here, would be the introduction of the Pipe Arts skill, which allows spellcasters to forget prepared spells to heal – spell level times skill ranks. Cool! 3 sample weeds are provided, including silver values and unique effects.

Kathryn Jenkins presents a new LotFP-class p next, the Ritualist, who is a variant magic-user. The article has a black background and white text, just fyi. They have no spell slots and but ONE spell, which they must roll for. The idea here is to depict a more grim type of spellcasting – the class, basically, has to sell their soul, risking possession and constant loss of hit points – permanently, mind you! This is paid for with the one “spell”, soul selling, which is not presented in LotFP’s usual format and rather as a component; the article suffers a bit from calling the ritualistic magic spells, when they’re more like curses or items. We also do not get a class table or the like, so yeah – this is, presentation-wise, a bit rough and could be more precise; at the same time, I enjoy this rather…grim type of magic. For e.g. a quasi-historic/medieval low fantasy game, I’d most definite contemplate building on this engine, particularly since the sample “spells” provided net some guideline.

The next section depicts “The Synod” – a grimdark quasi-Catholic anti-version of that Church – and frankly, I liked this article. The organization and its deviations seem interesting enough to potentially warrant expansion to a full book at one point. One of the factions here would be the Sineater wolves, basically “sacred” (haha) lycanthropes drawing from a few of our lesser known and obscure pieces of real-world mythology. Beyond stats for these, we also have a nice, brief section on lycanthropy and PCs.

We close this installment with an interview with none other than James Edward Raggi IV, the man behind LotFP.

Editing and formatting are very good on a formal level; on a rules-language level, the pdf is also pretty precise, but could have done a slightly better job regarding the ritualist. Layout adheres to a 2-column b/w-standard, and the artworks and particularly, the cartography (by Todd Gamble!), are astounding, considering the low price point. The map this time around is bereft of immersion-breaking numbers or spoilers, which is a big plus. However, the lack of bookmarks for the electronic version represents an unpleasant comfort-detriment.

Clint Krause, Judd Karlman and Kathryn Jenkins deliver a neat little ‘zine – Mr. Karlman’s article alone makes this imho worth getting, and the ritualist could have been pure gold, had it gotten more room to develop its cool ideas; even in its current, pretty barebones state, it’s interesting and very much relevant for the right campaign. In short: While this installment of Vacant Ritual Assembly doesn’t reach the lofty heights of the previous one, it still represents a file that’s very much worth getting. My final verdict will hence clock in at 4 stars.