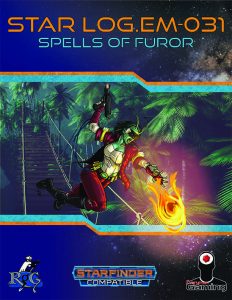 The first spell, blackout, is a technomancer-exclusive and comes in one version for all 6 spell levels. This spell makes you attempt a Computers or Engineering check as part of casting it. All items within the spell’s AOE (a 20 ft.-radius centered on you) that are powered or charged, including computers, technological items, etc. immediately stop working as though they had run out of battery charges. The spell’s effects are capped by spell level and DC accomplished, and a handy table presents these, but, in a puzzling layout decision, is on the next page. Why not have it on the same page?? On a really nitpicky side, I would also have welcomed a caveat that prevents this spell from potentially blackout-ing systems required for survival.

Bone spur transfiguration would be a cleric 3, magus 2, wizard 3 or mystic 3 spell, and requires that you touch a hand or prehensile appendage with a melee attack versus KAC. If you hit, you transfigure painful spiked into the appendage, causing 2d8 nonlethal piercing damage at the start of the subject’s turns. Interesting: Movement, including guarded steps, adds more damage, and if the target takes at least 1 point of damage, it’s sickened for 1 round. If a creature is below ½ maximum Hit Points, it’s nauseated instead, which is pretty nasty, condition-wise, and also requires tracking basically a pseudo-bloodied condition. (If I were to really nitpick here, I’d point towards interaction with Stamina, but you get the idea.)

The energy sphere spell is available for wizards at levels 1, 2, 4, 5, 7 and 8, for bard, magus and technomancer at levels 1 – 6. You get to choose one of the five basic energy types (yep, sonic included) and form a sphere of the energy, which may be moved up to 30 ft. as a move action. Dimensions and damage are contingent on spell level, and 3rd (wizard 4th) level begins also applying damage when a creature ends its turn within the sphere’s area. I am pretty sure that the 6th level caveat “A creature cannot be damaged by the sphere more than once per turn.” Should not have just been part of the 6th level text. While that level states that damage also applies when it moves through a critter’s space, it can end up dealing less damage than lower level versions.

Psychosomatic weapon is a second level spell for bard, wizard and mystic spells, and increases the damage caused by +2d6 weapon damage for one round; this is basically an illusion, so Will negates. One important component here, is that the verbiage implies that only you can inflict this damage, when the target, weapon touched, would allow you to buff allies. Clarification would be helpful here.

Slapstick is a spell available at levels 1 – 6 for bard, magus and technomancer, and changes one item with a bulk of not greater than 1 easier to wield. It counts as a basic melee weapon with the thrown (20 ft.) special property, and you use key spellcasting ability modifier instead of Strength to govern atk and damage with it, and damage type is usually kinetic, but subject to GM’s interpretation. The spell is balanced by the weapon’s damage being based on spell level, and 2nd level and all thereafter net Weapon Specialization with it, for +1.5 times CL to damage. Minor nitpick: While this prevents stacking two Weapon Specializations atop each other, the spell probably should only add CL to damage, as the feat usually only nets character level to damage, ½ for small arms and operative melee weaponry. The exception would be natural attacks.

Finally, we have vampiric bite, available for clerics level 1, 2, 4, 5, 7 and 8, and for mystics as level 1-6 spells. This is actually a close-range spells that deals piercing damage and bleed damage, while also bestowing temporary Hit Points, the latter of which may be used to heal damage on a 2-to-1 ratio. Solid one!

Editing and formatting on a formal level are excellent; on a rules-language level, I have a few instances where I can nitpick some details. Nothing horrid, but a few minor clarifications would help. Layout adheres to the series’ two-column full-color standard, the artwork is nice, and apart from the unfortunate decision of dragging blackout’s DC-table to the next page, doesn’t offer much to complain about. The pdf has no bookmarks, but needs none at this length.

Sasha Hall has certainly come a long way – this is now the second of her pdfs that I consider to be, as a whole, well-crafted. However, in some of the spells have a few rough spots in their details that slightly detract from this pdf’s otherwise precise handling of complex concepts. Hence, my final verdict will be 3.5 stars, rounded down for the purpose of this platform.