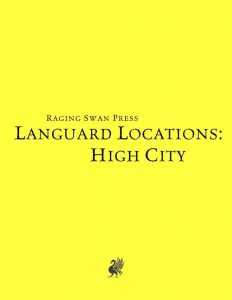 The pdf contains no less than 10 locations, depicted in detail, following the formula established by the series. Beyond the description of the respective locations, NPCs encountered are noted (with race and/or class suggestions, properly adjusted to represent old-school classes) in a fluff-centric manner, and the locations all come with their own adventure hooks, should PCs wandering into them not suffice for you to jumpstart your adventuring impulses. It should be noted that all these locations are new.

A local favorite, part baker, part alchemist and weird, with alembics and cauldrons, Old Mother Grumm’s sells everything from fruitcake to philtres of love, all made by the matronly and kind-hearted old lady-wizard the shop’s named for. As you can glean from the above, the items have been properly renamed to refer to classic, old-school items – but, alas, this renaming has not been consistently applied: There are references to the PFRPG items remaining in the flavor-text.

This place btw. also notes proper magic items for sale. And yes, if you are looking for a fine yarn and have the coin to spare, then you’ll find a place that caters to these demands in the High City as well: Needle’s Poise provides just that – supplemented by a proper b/w-artwork, btw. Easily one of the most outré places in the whole city, the “Emerald Medusa” is a multi-decked sailing ship turned festhall/eatery. The intricately-carved medusa emits beams of colored light from its lenses, and it is here that decadent nobles come to politick, weave intrigues or impress adventurers. And yes, there is a means to actually make the obvious disco-angle narratively-relevant. Kudos!! Pharran’s Shroud, then, would obviously cater to another sort of vice: Run by a silk-shrouded lady of unknown origins, this place would be Languard’s high-class brothel – and in an interesting twist, said shrouded mistress is actually not an entity with a petrifying or similarly devastating gaze attack, but something more rewarding to unearth…

And, to make that clear, I do think that this fits in PERFECTLY within the context of Languard. The High City is unique and has its own flair, one that manages to be both part of Languard and distinct from its other components. The city, as a whole, is enriched by the thematically-stringent focus on the Leitmotif – and in a world where magics exist, the presence of a place like the Emerald Medusa, easily my favorite place alongside Grumm’s, makes sense on so many levels, and also allows you to inject a bit of the weird into the grime and grit of the poorer regions. It generates a contrast that highlights the global motifs of Languard even better. It works because it is this weird place in an otherwise rather grounded area, and because it is rather realistic in how it presents its weirdness. I love it. In short, the High City of Languard is a great place to dive into some serious intrigue, to rub shoulders with the rich and powerful, and to shake your head at the decadence of the aristocracy. A great and unique region, this retains the exceedingly high standard of the series. My final verdict will clock in at 5 stars, omitting my seal of approval only due to the aforementioned remnant references.

Missed Languard? You can get the city here!