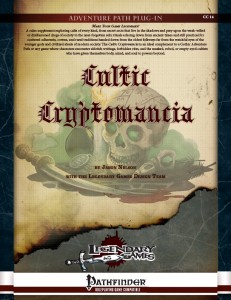 This pdf is 14 pages long, 1 page front cover, 1 page editorial/SRD, 1 page introduction/how-to-use, 1 page back cover, leaving us with 11 pages of content, so let’s take a look, shall we?

Cultists, as the pdf goes on to discuss, need not be evil and may spring from oppressive  governments and overtly restrictive dominant cultural streams. Of course, in fantasy gaming, cults tend to be even more problematic factor, often dabbling in the demonic and strange, being often associated with the things that hail from the Dark tapestry. As such, several of these rules tie in optionally with the neat madness rules from Legendary Games’ excellent Tomes of Ancient Knowledge, which imho should by now grace the virtual shelves of DMs by now. If you opt against these madness rules, you can still adhere to the standard-rules for insanity – so either way you’re covered!

First, roles particularly likely to interact with cults like exorcist and infiltrator inquisitors are discussed, as are ideas like Master Spies etc. and how existing class options may interact, for wela or woe with the cults. But what are cultic options? For the purpose of this book, the poor cultists that investigators and PCs mow down get finally new options, first of which would be an array of archetypes:

First of which would be the Apostate inquisitor, a heretic among heretics who is not limited to the domains and inquisitions of his deity. He gets an array of spells that help misleading his adversaries and maintaining his cover. Against adversaries of his former faith, the efficiency of his judgments is increased even further and may even use the bane ability /the Bane Magic-feat against members of his former faith.

The Sublime Bard is particularly suited for bards that already have the demagogue archetype and may circumvent language barriers with their bardic performances, cast dream and nightmare  and compel others to bring him tributes and even grants his servants/cronies bonuses and keep them fighting even when he has been knocked unconscious – a prime candidate for the role of cultist leader.

The Oracle may now take the Eldritch Mystery, which comes with 13 new revelations that include the option to join/create covens, wilder in witch hexes and major hexes, convince mobs to do your bidding, sacrifice minions to take hits or use veil to create uniform  cultist appearances to protect the identities of your allies/minions. Have I mentioned that the oracle may create wooden golems to serve as his/her personal wicker men? Hell yeah!

A total of 8 feats are also part of this supplement, allowing you to enhance your spells via certain creature types and subtypes you have researched via metamagic, increasing your damage output against them, gain additional benefits from the consumption of an opiate or sexual release – the latter being especially efficient when having intercourse with something alien. Disturbing – I like it! By inflicting damage upon yourself, you may grant yourself DR, providing teh first viable mystic masochism-feat with solid rules for PFRPG – good to see, also that neither of these feats require evil alignments – I whole heartedly approve! And then there’s a badass feat for monks that allows you to make your unarmed attacks more lethal and rip the hearts from the chests of your adversaries, thus preventing resurrection. Of course, sacrificing foes to power your spell focus, spell penetration and greater versions as well as directly powering your calling and summoning spells via sacrifices like that. Finally, you may benefit longer from successful intimidations.

13 new spells are also included  – from 3 spells to take on an aberrant form to creating shadow magic-based angry mobs (and a version with torches…) as well as spells to drain blood and impede the cartilages, these new spells are literally all killer, no filler. Especially the greater exsanguinating spell is neat, as its mechanics potentially can tie in with The Mad Doctor’s Formulary‘s surgery rules. Enchant fires, obscure grimoires, incite allies into a rapture that your enemies will dread and conjure up primal lusts that result in orgiastic rites – spells that are terribly cool and terrible in their results – but not their execution.

Editing and formatting are top-notch, I didn’t notice any glitches. Layout adheres to Legendary Games’ beautiful 2-column full-color standard and the pieces of full color artworks by Colby Stevenson and Tim Kings-Lynne are gorgeous and on Paizo-levels of beauty. The pdf comes extensively bookmarked with nested bookmarks, hyperlinks and an additional printer-friendly version.

Sooo….this is essentially the grand cultist’s crunch-box – great class options, awesome feats, evocative spells, nothing to complain content-wise, as crunch and fluff meet in the best possible of ways. But is everything perfect? No – at least not for me – while content and production value-wise, there’s nothing to complain, this pdf falls on the very short side for the asking price and the final page essentially only features a couple of lines of text.

Also, perhaps that’s me, but I would have loved for at least one type of incantation or some items- they feel so culty to me. In the end, this feels like a great first part of a book and can definitely use a sequel – cultists have been woefully neglected so far and this book is an excellent addition for both players and DMs to add options to their arsenal. The only reason I’m not awarding my seal of approval is due to this one remaining the relative brevity of the offering for the asking price. Thus, I remain with a final verdict of 5 stars.

You can join the cults in two versions:

The landscape version is here on OBS and here on d20pfsrd.com’s shop and the portrait-version can be found here on OBS!