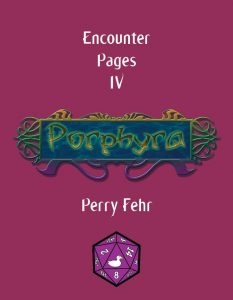 This pdf clocks in at an impressive 35 pages, 1 page front cover, 2 pages of SRD, leaving us with a pretty weighty 32 pages of content, so let’s take a look!

This pdf contains a total of 15 detailed encounters to throw at your players and spice up traveling, with every single one of them featuring an impressive, well-done full-color picture of the respective adversaries featured. CR-wise, we have 3 CR 3, 1 CR 4, 2 CR 5, 1 CR 6, 1 CR 7, 2 CR 8 and one encounter each for the CRs ranging from 9 to 13 herein, situating the pdf, level-range-wise, in the low- to medium level-range. The encounters all feature suggested environments and often highlight/showcase some of the amazing creatures that can be found in the seriously underrated Monsters of Porphyra II tome – but fret not: All relevant information for using the encounters, from statblocks to flavor, is included.

Structure-wise, each of the encounters features a brief summary of the area they take place in, the general situation encountered and detailed notes pertaining the treasures to be won from them. Cool: For maximum customization, each of the encounters comes not with one, but with several potential complications you can use to squeeze it dry and make it more intriguing/challenging. For fans of Porphyra, a paragraph each contextualizes the respective encounters within the cosmos of the patchwork planet.

Sooo…that would be the base structure of the material presented herein. In order to talk about the respective encounters in more detail, I need to go into SPOILER-territory. Potential players should jump ahead to the conclusion.

All righty, only GMs around? Great! I’ll go sequentially through the respective encounters, in order of presentation and CR. The first would be “Alien Menace”, where the PCs are pitted against armadillo-like, technology-dependant aliens called xenarthans; the strange light witnessed by locals was them teleporting in and the laser rifle-wielding creatures may have, if the GM opts to, a cloaking generator that depicts them as…cows! And yes, the generator can be destroyed, potentially causing “2d8 electrical damage” – alas, no range is given for the explosion of the generator and it’s “electricity damage”, not “electrical damage.” Further complications can include being marked as an enemy of the race…which may double as a boon when interacting with the dreaded femanx race.

In the next one, “Shadow of Murder”, the PCs can investigate a string of murders in a less than pleasant city quarter, where potentially the mad souls of those slain still roam the streets…only to find that they’ll be confronted by an assassin spirit. “Frost in the Sand” takes place in a desert or similarly warm environment…and weirdly, the pumps of the place seem to be frozen – dealing with the ice ooze culprit certainly can make for an interesting diversion or justification for establishing communications. The complications include tunnels so twisted and uneven that they severely hamper the use of ranged weaponry – some players may balk at two common feats (Precse Shot and Point-Blank Shot) not working there, but personally, I think it kinda makes sense and is a cool idea.

The next encounter takes place in a rural environment, where a mawgriff, a carnivorous giraffe griffon, has escaped a traveling circus…but whether and how the PCs resolve this conundrum remains to be seen. And yep, the complications can include actually getting a calf, which is why training options for the creature have been included. Nice!

Speaking of aggressive magical fauna – saving a wagon and several youths that have bumbled into the territory of burrow-mawts, Tiny and deadly critters, can make for a rather fun diversion highlighting the creature. If the PCs are within a dwarven stronhold, springing upon them a scene where a blind and deaf dhosari carries a gift for the dwarves can be the first step towards disaster, as the cube in fact is a metal elemental in disguise, waiting to cause all kinds of havoc. The delightfully grotesque yaramayahu that haunts an oasis can make for a rather unpleasant surprise for the PCs as well, particularly when a sandstorm is rolling in.

Within the deep and green recesses of the jungle, fearless PCs can pit themselves versus deadly ophiduans and, while we’re on the topic of wilderness – what about a druid outpost that has mitigated the environmental impact by means of the angel jelly, a unique good ooze that by now has become rather uncontrolled and hungry, providing for an interesting conundrum. What about freeing a village from an eccentric kukkoad masquerading as a human? The deadly facada clown demons haunt an unfortunate casino and currently are in the process of a show – hopefully the PCs use the period of grace to prepare properly…

The feline and powerful ashrakes (flying tiger-humanoids) may be encountered with hobgoblin slaves and obviously try to probe the defenses of the locals…hinting at worse to come… Another encounter deals with a “Festival of Freedom”, which just is a front for the agenda of proteans, trying to subvert the local dominance of Law. A desert pass is haunted by a Huge and strange dromopod, a monstrous centaur-like humanoid with serious power. The as of yet unpublished third Monsters of Porphyra book’s Urseloct represents the threat in the EL 13. Why would you care? One word: Bearsharktopus. Yes, it looks badass.

Editing and formatting are very good in a formal way, the rules-language is slightly less precise and sports a couple of minor hiccups, though not truly grievous ones. Layout adheres to a 2-column b/w-standard with purple highlights and we get at least one massive full color artwork for each encounter! Kudos! The pdf comes fully bookmarked for your convenience.

Perry Fehr has a mind of unbridled creativity and when he manages to get the rules-language done precisely, he delivers excellence. While this encounter-collection has a couple of different glitches, the encounters themselves are creative, diverse and cover a wide variety of themes: From the dark and horrific to sword and sorcery and even the gonzo, we cover a lot of themes and the encounters herein can all be used as a starting point for further adventures; they can be expanded or run on their own and have enough character to act as inspiring adventure seeds. In short – this is a great collection of encounters, but one that is hampered by a couple of minor hiccups. Still, this is definitely worth getting. My final verdict will clock in at 4 stars.

You can get these cool encounters here on OBS!

You can directly support Purple Duck Games here on their patreon!