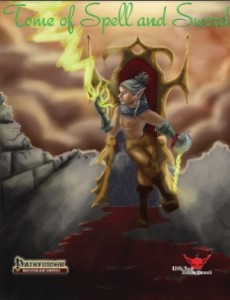 This pdf is 27 pages long, 1 page front cover, 1 page editorial, 1 page SRD, leaving us with 24 pages of content, so let’s check this out!

The pdf kicks off with a new base-class, the Dimensional Knight, who gets  d8, 4+Int skills per level, 3/4 BAB-progression, good will-saves, proficiency with simple and martial weapons as well as light armors. Dimensional knights also cast arcane spells of up to 6th level and cast them spontaneously, but use intelligence as a casting attribute – a deviation from established cha/int-casting-style dichotomies you should be aware of.  They also get arcane pool points equal to 1/2 class level + Int-mod that partially stacks with e.g. the magus-class. The dimensional knights may also move 5 ft. per class level as a swift action as if using dimensional door and as a touch attack that costs 1 arcane pool point  to forcefully move targets the same distance.

What’s truly interesting about the class, though, would be the ability to create portals – yes, just like in the games – two-way portals that make it possible to attack through them blast through them etc. – with cover, bursts etc. being covered by the rules as well as line of sights and effects. It should be noted that some DMs might want to impose a limit on this per se unlimited ability – I suggest 3+Int-mod times per day, since this power is imho a bit too powerful to have no limits, especially with the action required getting less and less significant over the levels. Dimensional Knights may also sheathe themselves in minor dodge-bonuses granting fields. At 3rd level and every 3 levels after that, the dimensional knight also get access to a new dimensional knight talents, of which a total of 16 are provided.

These talents allow the dimensional knights to create e.g. one-way portals, create portals that work only for one particular being, portals that disorient those passing through etc. – among the coolest abilities is one that mirror images you after you pass through it  – a massive amount of potential annoyance for the knight’s foes indeed! Multiple of these talents require the expenditure of arcane pool points and include e.g. the creating of deadly interdimensional bombs and evade all types of instantaneous effects by using an immediate action and dismissing the spatial anomaly-field.

Dimensional knights also get the ability to create permanent nexus gateways ( very useful for dungeon crawling!) and comes with a cool capstone ability. All in all, a cool class in the vein of “thinking with portals”, but one that imho needs a limit on how often portals can be opened. All in all, this class is worth the asking-price of the pdf – an uncommon, interesting take on a gish-class with a very versatile gimmick.

Next up is the Spellslinger-PrC, who gets 4+Int skills, d8, full BAB, medium fort and will-save progression and 7 levels of spell-advancement out of 10. Essentially, this is a combination-class between arcanist and gunslinger, allowing you to imbue spells into your bullets and deliver them via bullets, foregoing  ref-saves. Thankfully, only a limited amount of such bullets can remain in existence at a given time, balancing the class. They may also shoot rays with their gun and sacrifice spells to increase the damage their bullets do or sacrifice spells to shoot elemental blasts – unfortunately, the class does not specify how these blasts work – do they require touch attacks or regular attacks? Offer saves? Hit automatically? We don’t know. The class also comes with 7 new deeds and may sacrifice attacks to blast other projectiles out of the air and counter spells via their bullets. It should also be noted that the PrC’s table lacks the plusses in front of the saves and BAB.

The next base-class is the Thunder Chief, who gets d10, 4+Int skills, full BAB, good ref- and will-saves, divine prepared spellcasting via wisdom of up to 4th level. As an interesting mechanic, thunder chiefs get storm token – they can carry up to wis-mod ones at any given time and start combat with 1/2 wis-mod storm tokens. Being in an area with a storm or being subject to cold, electricity or sonic damage nets the chief one token. outside of combat, they relatively fast are discharged. He may also lower his resistances (which he continuously gains) temporarily to gain storm tokens – the wording of this ability feels a bit jumbled, though. The signature weapon of the class is a blade of pure electricity and over the levels, the chief gets access to a variety of different talent-like abilities that center on new uses for storm tokens, allowing you to e.g. form two storm blades, make foes temporarily lightning rods or create a blade from cold instead – per se rather cool abilities, though unfortunately a couple of them fail to specify how the save against their abilities is calculated – I assume 10 + 1/2 level + wis-mod, but I’m not sure, it could also be net-damage…

Beyond these martial capabilities, they also learn to add storm-related powers to their spellcasting. These abilities are rather on the defensive side, but turn out to be interesting and the several other abilities of the class complement its theme nicely. I’ll come out and say it – I don’t like the base mechanic – I passionately dislike per-encounter-abilities since they imho violate PFRPG-design philosophy and the storm tokens unfortunately fit that bill. I get the idea behind the class and actually like the idea, even though its ability-suite is slightly too linear for my tastes, but the basic mechanic means I probably won’t use it in my game – even though such a class bringing a dead guy back from life via thunder and lightning has some iconic imagery going for it.

Next up are 25 new feats. I won’t go into the details for them, but mention only some things I noticed – a feat that allows you to deal additional fire damage in melee after casting a spell instead deals cold damage: A cut-copy-paste error. Furthermore, there are Master (insert school)-feats and their balancing is all over the place – especially the one for conjuration, which offers three very powerful options depending on the subtype of conjuration used for one feat. Additionally, the wording is not particularly precise, stating e.g.

“After casting a conjuration: healing spell you may act as

remove disease, or delay poison for any 1 effect currently

affecting you. Using this ability takes a spell slot of the appropriate

I reread this multiple times and have no idea whatsoever how this ability is supposed to work, even beyond the fact that the paragraph features 4 formatting errors. Oh, and yes, this free spell is just ONE of three benefits of the feat – which btw. also states that it is available to evokers, when it should be available to conjurers. The whole feat-section feels like it lacked a proper editing job, for there are a lot of these issues in here. Which is a pity, for mostly the feats that enhance portals or add effects to your melee attacks after casting spells of specific schools are rather neat.

There also are 9 new spells, some of which feature the new [spatial field]-descriptor – this subtype of magic essentially makes it possible to modify a certain area of magic as if it were on another plane, allowing for e.g. modifications in gravity. The spells per se have good ideas like dealing more damage to burning foes, exuding electromagnetic blasts, modify gravity and extend and compress spaces – these spells in particular should be useful not only to players, but also to DMs crafting unusual terrain and usually, you’d see me singing praises here…BUT. Unfortunately, these spells are also haunted by the glitches that have crept into the feat-descriptions – from multiple typos to formatting issues, quite a bunch of errors have found their way into this section as well.

The pdf closes with 10 different qualities for magical weapons and armor. Unfortunately, the editing also detracts from this chapter, with lacking punctuation making several abilities harder to understand than necessary.

If this pdf has one issue, it’s editing and formatting – there are A LOT glitches in here. From lacking italicization of spells to lacking bold print, brackets, punctuation and so on, we run the gamut of glitch upon glitch – and while most don’t impede the overall usability of the pdf, there unfortunately are several glitches in here that do so –  beyond obvious ones, one can also find one particular issue that galls me: The writing is often simply less concise than it should be – due to punctuation-glitches sentences tend to blur together and unnecessarily obscure the rules-content – in parts of the pdf, that is – in other parts everything is all hunky-dory.

Layout adheres to a parchment-background 2-column standard with original pieces of full color artwork and the pdf comes fully bookmarked.

Oh boy. When I started reading the dimensional knight, I was grinning from ear to ear – this class rocks hard and its execution is solid – with the caveat that DMs definitely should limit the portal abilities of the class – unlimited uses are going to break your game if not handed VERY carefully. The spellslinger is also a rather neat PrC and by this time, I was actually really into this pdf. Then the thunder chief came and while I like it’s idea, I already elaborated on why the class feels more like an afterthought and not nearly on par with the first two to me. Still, a good pdf so far.

And then the rest came alongside a sudden and perceivable drop in editing, wording and conciseness regarding the rules – almost as if a completely different person wrote it, with completely different (read: none) Q&A-standards. As awesome as the first part of the pdf was, as utterly disappointing and at times even broken the second part was to me – not unsalvageably so, mind you, for a lot of the issues stem from a lack of editing of these rules-sections , but still as if it was the product of a whole different company.

Where the first two classes exhibit a consciousness for moderately complex ideas and cool implementations, the second half falls rather flat of both the first half’s quality and production values. Were I only to judge the first half, we’d be looking at a verdict in the higher echelons of my rating system, but due to the deeply flawed editing that serves to actually obfuscate how some pieces of crunch are supposed to work, especially in the second half of the product, I can’t rate this higher than 2.5 stars, rounded up to 3. If you’re picky about precisely formulated rules, then wait and hope for a revision, but if the first two classes sounded intriguing to you, then you still might want to check this out – it is definitely worth a try if you can see past its flaws. One consolation for me is that having read other pdfs by LRGG, I know they can do better editing-wise and I hope this pdf’s second half remains an isolated incident. Still, as mentioned before, if you like the idea of the Dimensional Knight, I encourage you to take a look.

Start fighting with portals here on OBS and here on d20pfsrd.com’s shop!