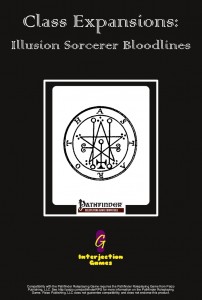 This installment of the Class Expansions-line is 5 pages long, 1 page front cover, 1 page SRD, leaving us with 3 pages of content, so let’s take a look at what we get, shall we?

Illusions and sorcerers don’t mix well. That’s been the status-quo so far Want a crafty deceiver? Go wizard or witch. Which has always stricken me as odd, seeing as sorcerers with their cha-dependant casting would make for perfect con-men and due to the versatility of illusion-spells, they somewhat could offset their limited spell array. In here, we get 3 new bloodlines focused on Illusion-spells for subtle, charming sorcerers -so how do they hold up?

First would be the Artist and taking one popular trope, the bloodline kicks off with a cool ability – scribe scroll, phantasm-spell-scrolls at 1/3rd price. I see you yawn. Don’t deny it. What’s cool is HOW this is explained/works – instead of writing a usual scroll, the Artist may create a drawing, whether via colors or charcoal and essentially hide spells in these drawings. A great idea that made art exhibits in-game much more exciting, but at the same time, it also misses a chance – Why are there no skill-DCs included to make the paintings seem mundane/perception-DCs to realize that something’s off? Yes, the usual detect-routine exists, I know – but still: That would have been a modification to make a nice ability mind-blowing.

The second ability is also interesting: As a standard action, artists may, a limited amount of times per day, alter perceptions of foes within a close range, e.g. omitting a door from their perception, cloaking a pit etc. This selective illusion is limited in range and duration, making abuse hardly possible.

You may also detect magical traps if they feature illusion spells and reappropriate illusion spells with the phantasm descriptor to other targets if your primary target succeeded his/her/its save a limited amount of times per day. At the highest levels, you may make your illusions harder to resist by doing research on your foe and as a capstone, you permanently shroud yourself in concealing illusions.

The second bloodline we get is the bloodline of facets, which is gem-themed and allows for the substitution of gems as alternate material components for your pattern-spells that increase their power at the cost of the gem, throw dazzling gem flashbangs and become a true master of all things earthen, gaining bonuses to knowledge checks and even stonecunning to reflect your obsession with the multifaceted treasures of the earth. The most interesting ability in my eyes, though, would be unlocked at level 9, when after a failed save versus one of your patterns, but before the effects kick in, the foes actually receive 1d3 fire-damage per spell-level, adding quite some injury to insult.

In contrast to this pdf’s first iteration, the ability has been nerfed to deal less damage, which is also why I’m ok with it – usually I’d demand a limit of x times per day for free additional damage added to spells, but in this case, the reduced amount is all right in my book.

At 15th level, we get an ability that lets you emit single-target color spray-style rays that treat the target as having a lower HD – they count as your cha-mod lower HD – great to get out of melee-scuffles and thankfully, a slightly ambiguous wording has been eliminated. The capstone nets you a DR and punishes any melee attacker with reflexive color spray effects. Ouch!

The third and final new bloodline would be the Restless, who specializes in figments – when a figment initiates a touch, for example, the DC versus the illusion is increased by +2. As a signature ability, the Restless sorcerer may call forth a shimmering spirit, a silhouette who may at later levels even interact with physical objects and at higher levels, deal wis-damage with touches. (While the latter is a violation of what figments can usually do, I don’t consider that problematic.) Unlike regular figments, the spirit does not require concentration, making it for a great way to lead adversaries into trouble, create confusion etc. Better yet, at higher levels, the sorcerer may now speak through the figment, allowing for negotiations via the spirit – though the interaction could be deemed problematic, seeing the amount of time e.g. diplomacy skill-checks tend to require as well as the rather restricted amount of rounds the spirit can remain manifested – sorc level + cha-mod rounds. As written, e.g. diplomacy-checks to influence attitudes already take 1 minute – while requesting things would still be possible, I feel the ability could be so much more useful with more rounds per day…

At 9th level, though, the bloodline gains perhaps one of the potentially funniest abilities ever to get into the hands of player characters and one that foes like fey in my game will scavenge the hell out of: 1/day, as a swift action, you can cause a figment spell to become real for a limited time, even if it’s been disbelieved. Hole in the vault’s wall? Yep. Rock slide? Yep? Loony Tunes-style vanishing floors etc.? Yes. Watch your foes charge at your illusions and go Willie E. Coyote on them. If that does not make you smile, I don’t know what will. (And yes damage, saves etc. are addressed.) If I had one thing to complain about, it would be that the ability does not scale upwards – you’ll always be restricted to 1/day. This ace in the hole is just cool. *puts 2 bucks in the bad pun jar*

At 15th level, you may link two figment spells, concentrating on both as one action and as a capstone and as a capstone, your spirit gets a massive upgrade to cohort-level – as well as a cool story-reasoning for its existence. Whether your spirit becomes a warrior or a fighter depends on whether you have the leadership feat and additionally, you get a significant update of rounds per day to have your spirit active. Rather cool, actually – this ability has been salvaged from broken to awesome – two thumbs up!

Editing and formatting are top-notch, I didn’t notice any significant glitches. Layout adheres to Interjection Games’ elegant 2-column b/w-standard and the pdf sports thematically fitting stock art. The pdf has no bookmarks, but needs none at this length.

I LOVE the concepts behind each and every bloodline. Each one at least has one ability that makes me grin and cackle with glee, that makes me want to use them – the Artist in particular will see use in my game and for Throne of Night or Rise of the Drow, Facet sorcerers will make for nice additions indeed. These bloodlines, especially when you have read as many as I have, feel refreshingly different, smart and just high in concept.

The revised edition has eliminated almost all my major gripes, though not all minor ones:  With the Artist, the missed chance to include forging/disguise options is a minor detriment. The Facet has been significantly improved. The final bloodline now actually works as intended and is glorious, though personally, I’d make the spirit last longer, but that’s easily houseruled.

I really appreciate it when glitches, especially those that are easily rectified, are addressed  – as is the case here. Interjection Games’ mastermind Bradley Crouch has taken these high-concept class options and painted a canvas of interesting ideas, that much like the facet’s gems now gleam thanks to their due polish and I assure you – they will haunt your imagination. The revised edition is vastly superior to its predecessor and thus worth 5 stars.

You can take a look at this here on OBS and here on d20pfsrd.com’s shop!