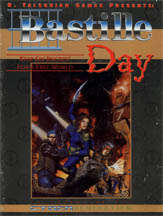 Well, at least, let’s try. You see, the scan this time around is not particularly good, which makes the letters come out a bit pale and gray/blurry, which proved to be a considerate hassle while reading this as a pdf. Perhaps it’s me being sensitive to the like, but I considered this to be somewhat exhausting for the eyes. Anyways, this is a module, but it also features two new yogangs, so I’ll start with those, all right?

Oh yeah, before I forget: This was moved up in my review-queue as a prioritized review at the request of my patreons.

The yogangs are presented in the same style as those in other Cybergeneration-supplements, with a write-up, slang, etc. The first of these yogangs would be the moshers, the party hard crew – as heirs to punks, metal heads and the like, the yogang is something I can relate with: Using music as a vehicle to navigate the harsh realities of life makes sense to me. The yogang skill they get is pretty powerful – more so than I’*m comfortable with: It’s called Mosh (BODY) and does not mean going into a pogo or doing some headbanging – it’s whenever you do something reckless. It contains some martial arts uses, halving impact damage, staying awake – in short, it is a very wide open skill, one that may be considered to be OP, depending on how you read it.

The second yogang presented herein would be the trogs, somewhat akin to subterranean ArcoRunners – basically, trogs are the sewer/cavern-dweller, the guys and gals that creep out of maintenance shafts – think of them as Nosferatu, minus vampirism and curse-based disfigurement. Their yogang skill, Spelunking (INT), is pretty potent as well, though more situational: It lets you determine airborne toxins, nets you a spidey sense for nearby threats and the option to stare down some deadly critters. Basically, think of these guys and gals as subterranean rangers or guerillas.

Unlike other yogangs presented throughout the Cybergeneration-supplements, we don’t get new tools or pieces of equipment for these guys, though, which makes them slightly less well-rounded in that regard.

Anyways, this is pretty much as far as I can go without going into SPOILERS. The following discussion of the adventure-section contains these in spades, so if you’re planning on playing this module, please skip ahead to the conclusion NOW.

All righty, only GMs around? Great! So, legends Rache Batmoss, Spider Murphy and Dog have their hands full: California has recently lost its sovereignty , and thus, the BuReloc (Federal Bureau of Relocation and Housing Security Services) activity is spiking. During a run on a CorpSec server, Spider Murphy, strangely, seems to have vanished/jacked out. Unfortunately, Spider has been captured, as she was running from the perceived anonymity of a secured, rundown locale – and has midrun, alongside a ton of others, been captured for reeducation. Thankfully, BuReloc and CorpSec don’t like each other very much – and while CorpSec knows that BuReloc has Spider, they don’t know who she is…and thus, they have sent a spy in deep cover to the facility – which, thankfully, has not yet been completed, using the captured undesirables as forced labor to build their own camp.

The task, for the kids, will be, obviously, to infiltrate this camp and the set-up provided for this is pretty modular. If you want to, you can include Dog as a chaperone for the PCs to make the module easier- but after the detailed and extended briefing, the book presents the full freedom of choice: Even getting to Spider’s apartment to have an initial angle to start their investigation is already rather modular: Depending on the route chosen, different, fully-depicted encounters await and at Spider’s place – which is now under the control of BuReloc – so the PCs will have some interesting time on their hands trying to infiltrate the fully mapped complex.

Having slipped, hopefully, through the nets of BuReloc, the PCs will have a trail to pursue – though, alas, Nomad Santiago is also MIA, potentially injured…The legwork is rather detailed as well – and once the PCs have exhausted their options, they can begin with the BuReloc camp infiltration – the camp is once again fully mapped and the supplement does take a lot of details into account – including e.g. the potential for wizards to use their gifts to reprogram the addictive indoctrination booths. Indeed, the module feels very much like an early adventure, sine the book contains a lot of tricks for the creative use of the special abilities of the kids…however, this very much shows that it is an early supplement – it doesn’t use Cybergeneration on its own, often referencing Cyberpunk books and the aforementioned, unique tricks don’t always come with rules to back them up. Take the mentioned, intriguing reprogramming example as one instance of this – no clue is provided on how difficult that would be.

While the CorpSec spy makes for an interesting complication, the other4 people mentioned only remain pale, with one sentence provided for them – a table of fluff-only characteristics for the NPCs would have been nice, if to make it harder to differentiate important from unimportant NPCs.

Editing and formatting are good – I noticed a couple of minor glitches and hiccups regarding rules-coverage, but as a whole, not too many jarring instances. Layout adheres to Cybergeneration’s 2-column b/w-standard and the pdf comes with nice, original b/w-artworks. The scanning quality isn’t too good, though, and the lack of bookmarks represents a serious comfort detriment.

Edward Bolme’s Bastille Day is by far the weakest Cybergeneration supplement I have read so far. The new yogangs feel like afterthoughts that are tacked on and don’t really have a good reason to be in the book. More importantly, the adventure feels weird to me: The kids act as help for the “big guys” and I never managed to shake the impression that they’re not the heroes, but rather the b-team of sidekicks. You know, like in many a cartoon-series, when the hero’s captured and the annoying sidekick gets the spotlight to save them, often to “prove their value” – I always hated that in kid’s shows. (No, we didn’t want to be Robin – we still wanted to be Batman. And most of the time, we still considered the sidekicks to be annoying after that…)

The name is also WEIRD. When I read “Bastille Day”, I think of something more important, monumental, of something actually important, when this module presents a pretty run of the mill jailbreak scenario. The BuReloc-camp is depicted in lavish detail and I really enjoy the sandboxy nature of the module, but it is pretty much a standard extraction for Cybergeneration – it doesn’t have anything cool or unique to set it apart. It does this standard-trope well, all right – I’ll give it that. But any halfway decent GM who’s played a couple of Cyberpunk or Shadowrun adventures can basically improvise such a scenario. I know that, particularly in comparison with the “-front”-books and modules therein, this felt rather bland.

Not bad, but similarly, not mind-blowing. Add to that the serious issues of scan-quality and lack of bookmarks and we have a supplement I really can’t recommend. I love Cybergeneration and its ideas and books, but unless you’re a completionist, I’d recommend to skip this. My final verdict will clock in at 2.5 stars, and I can’t find it in me to round up.

You can get the pdf here on OBS.

You can get the print version here on R. Talsorian Games Inc.’s shop.