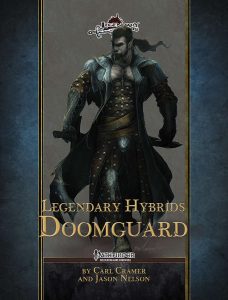 This hybrid class was created from cavalier and ranger, and gets d10 HD, 4 + Int skills per level, proficiency with simple and martial weapons, light and medium armor and shields, excluding tower shields. The doomguard gets full BAB-progression and good Fort-saves. The class gets solid favored class options for the core races.

The doomguard’s challenge-equivalent, usable 1/day at first level (plus an additional time per day for every 3 levels thereafter) is activated as a swift action, nets a scaling bonus to atk and damage as well as saves prompted by the target, and also nets immunity to fear prompted by that foe if that foe is a fated enemy. The bonuses scale every 4 levels. Here’s the unique thing: This is called defiance, and as such, the doomguard gains temporary hit points versus said foes, and defiance may delay the onset of a negative condition.

As for fated enemy – this is obviously the equivalent of favored enemy, though it does come with meaningful variations – you can, for example, choose character classes! Witch or sorcerer hunter? There you go. I adore this choice. It’s so simple, yet incredibly flavorful. Also unique: This ties in with the doom – falling to the fated enemy makes returning the doomguard to life hard – this enemy, after all, was fated to defeat the doomguard! I love how this ties in flavorful concepts and leitmotif of the class.

Beyond that, the class begins play at 1st level with a so-called doom. This doom represents the “doom” component and behaves somewhat akin to an oracle’s curse, sporting btw. advice for multiclassing – kudos! Unless I have miscounted, we get a staggering 45 (!!!) such dooms, and they are somewhat akin to curses in that they have a linear progression. Dooms provide benefits at 1st level, 5th, 10th and 15th level. The dooms are, in a way, one aspect that really carries the class.

Is your body slowly rotting away? Do you destroy objects held? Are you haunted by disembodied voices? Are you mutating? Are you slowly becoming undead? Do sacrilegious voices constantly try to tempt you to a new credo? Do you bear stigmata? Perhaps, you are truly star-crossed, and natural rolls of 11 under stress are treated as 1s. Perhaps, you suffer from somnambulism…or perhaps the solipsism that has affected you crippled you, yes…but it also grants you significant powers! The interesting thing here is that the dooms range in their power-levels – they oscillate rather strongly, in fact…but at the same time, so do their benefits. When struck by a potent doom, you’ll also have considerable advantage bred from this. Some are in line with curses, while others are truly unique – and here, we can see LG’s crunch-design experience. I found no single doom that I’d consider to be off regarding this ratio. You can choose a doom that doesn’t severely impact the core playing experience…or you can go for a doom that radically changes how you need to play, but which also grants you unique benefits. Dooms take up a significant amount of the page-count, and the pages are, I’m happy to report, well-spent indeed. Curse-spread, internal parasites…there is one minor hiccup, a reference in the introduction to a Cursed feat that has been cut, but this does not compromise the integrity of the section in any way.

2nd level nets a ranger combat style as well as +2 to saves versus curses, hexes, compulsions or bad luck/reroll enforcing abilities. 3rd level eliminates the penalties for charges and 4th level provides Heroic Defiance, but only for use with fated enemy-caused effects, but also for more uses and condition delays. 5th level nets +2 to Con-checks to avoid becoming fatigued/exhausted and quicker tracking. Some conditions may be offset by expending defiance (yay for more player-agenda!). At 7th level, we get a cohort, a familiar or an animal companion at -3 levels…and yes, this gets interactions right. At 8th level, attacking a foe other than the doomguard while threatened elicits an AoO – making the class work as a nice blocker. 9th level allows the doomguard to detect fated enemies, and may choose to further limit this detection ability, ensuring it’s actually useful. At 11th level, having line of sight to fated foes increases movement rate and the doomguard can also immediate action move 10 feet to pursue fated enemies trying to flee. 12th level allows the doomguard to forego critical bonus damage in other to impose the negative aspects of the doom on foes. Cool: Can’t be cheesed.

17th level provides the means to bypass DR/hardness and cause full damage versus incorporeal foes. The capstone makes the doomguard a super-deadly foe for fated enemies, including the chance to permanently destroy even creatures that can potentially rejuvenate.

The pdf also includes 4 different archetypes, the first of which would be the Challenger, who loses medium and shield proficiency, and uses Charisma instead of Wisdom as governing attribute for doomguard abilities. Instead of the companion, the class gets a scaling AC and CMD bonus while wearing light or no armor. Instead of combat style, the archetype gets a few bardic performances, and the 8th level ability is replaced with uncanny dodge. Okay engine tweaks. The second archetype is the Doomwarden, who does get heavy armor and tower shield proficiency. Instead of combat style, the doomwarden gets a massive array of armor-style feats sans prerequisites. 5th level provides improved maneuverability in armor ( less armor check penalty, better maximum Dexterity) as well as better movement, This does replace defiance. The class otherwise gets a modified 5th level ability to prevent save bonuses or pinpoint creatures etc. 12th level allows for reflexive use of defiance, including negating incoming damage. The archetype also comes with a potent 1/day last stand capstone that makes him a fearsome tank.

The third archetype would be the fey foundling, who is prohibited from wearing metal armor. They do get woodland stride and resist nature’s lure, but does gain a unique companion (including pipefoxes, faerie dragons, etc.). That being said, the archetype learns to entice fey I, can at higher levels traverse the secret crossroads and backroads of the fey (amazing) and convert damage to nonlethal damage, adding curses on hits…or even causing targets to suffer from an iron allergy! Heck yeah! Oh, and becoming ageless. Kudos!

Finally, there’d be the raven banner, who becomes fortified versus negative energy, death effects and energy levels. Instead of the 3rd level charge-enhancer, a simultaneous attack versus targets criting the raven banner can make for amazing mutual takedowns. 5th level nets banner (14th greater) and the banner retains its powers at higher levels for a couple of rounds when the raven banner’s slain. Badass: When slain by a non-fated enemy, the character can expend defiance to auto-breath of life! F*** YES! Good example for a fun engine tweak!

Conclusion:
Editing and formatting are very good on a formal and rules-language level. Layout adheres to legendary Games’ two-column full-color standard and there is a lot of content per page. We get a couple of gorgeous full-color artworks, including full-page pieces. Neat! The pdf comes fully bookmarked for your convenience.

As you all know, I’m pretty much in favor of constant player-agenda and choice – and in a way, the doomguard doesn’t deliver that. It’s not a class sporting a lot of choices, and building one is super-simple. That being said, it’s one of the single best examples ever for a simple, easy to grasp, yet superbly creative class. The doom-angle and vastly diverging playstyles and playing experiences born from them, rocks. From the dooms to the archetypes, the class is incredibly METAL. The concept of the doomed, potent hunter suffuses the whole class, offering exciting tweaks, and manages to be totally distinct from the parent classes.

In short, this is not only a hybrid that stands out, and does so in a category of design that I usually loathe (linear classes), it does so with panache aplomb. Carl Cramér and Jason Nelson deliver a super cool hybrid here, one that absolutely deserves my highest accolades – 5 stars + seal of approval. Super recommended, one of the best hybrid classes out there! If you wanted to play a truly metal warrior-style character, look no further!

You can get this amazing, incredibly metal hybrid class here on OBS!