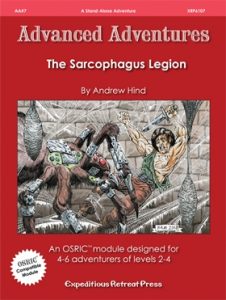 This installment of the Advanced Adventures-series clocks in at 17 pages, 1 page front/back cover, 1 page editorial/ToC, 1 page SRD, 1 page advertisement, leaving us with 13 pages of content, so let’s take a look!

All right, as pretty much always for the series, this module uses the OSRIC rules-set and is easy enough to adjust to other old-school systems. It’s intended for characters level 2- 4, and a well-rounded group is very much suggested. That being said, difficulty-level-wise, I consider this to be a tough, but fair challenge – the module per se can be pretty tough if you want to “clear” the module and score all the treasure; focusing on the story makes it easier to complete – risk-reward ratio is sound.

Sand-borne lamprey like worms, stats for scorpion swarms and a giant black scorpion are included within, alongside another new critter, the vermin dog. More on those critters later. The cartography is functional, b/w, and, as always, we unfortunately don’t get player-friendly versions of the maps.

Structure-wise, this module represents two different modules, roughly connected by a mini-hex-crawl overland map, though the PCs will follow a specific trail, so no hexcrawling is really required – the wilderness behaves more like a point-crawl. Speaking of which: We do get notes on random encounters for the wilderness area, focusing on vermin, with a bit of undead thrown in; the wilderness area also features a selection of a few scripted encounters the PCs are going to happen upon.

Okay, there is one more thing you should know about this module: There is one problematic bottleneck herein, and it may well break the module for you and yours. Big plus: The attention to detail is surprising: Even old statues that are truly unwieldy note weight and potential GP-value when dragged out of the desert – really cool.

All righty, this is as far as I can go without serious SPOILERS. Potential players should jump ahead to the conclusion.

Only GMs around? Great! So, the PCs have been hired by Sultan Mehmet, a disgusting, misfigured man, to retrieve his fifth wife, Syriana, who has just been kidnapped by dervishes, a desert-dwelling tribe long in conflict with the sultan and his men. Thus, lancers guide the PCs to the desert, where they happen upon the carnage of the desert ambush – and provided they can get rid of the hostile vultures, they’ll be able to track Syrianas captors through the dunes.

Living through a sandstorm while tracking the dervishes, the PCs will also happen upon zombies, littered with scorpions, as they find the remains of the dervish party. These undead are modified to quickly heal, and smart PCs will notice that the scorpions, symbol of death, are the reason for the unnatural toughness of the shambling corpses – this is actually foreshadowing! Following Syriana’s last captor towards the mountains, the PCs can track the last dervish, the only one to survive the rigors so far, to the first dungeon. They’ll see him right away – in a pool of blood.

This is, once more, a clever means for smart players to be warned of danger afoot: The dervish has escaped to an abandoned dwarf complex, and dwarves are not exactly welcoming – so approaching the doors, we have a nasty knock-out gas trap; smart PCs will be warned and may pass through the semi-open outer doors and disable the gas. Even if the PCs fall here, the gas is non-lethal…and after the PCs have dealt with this hazard, they’ll notice that the dervish has fallen to the gas, then had his throat cut.

Looks like Syriana is no mere damsel in distress – unfortunately, this means that her trail leads into the depths of this desolate complex. The harsh welcome does provide a good example for indirect storytelling: The dwarves were adherents of a duergar-like, nasty God, one of toil and xenophobia; thus, their defenses, including the only slowly-opening doors with the gas-trap, rendered the complex a tomb when they were attacked from below. You see, a cadre of nasty derro annihilated the dwarven inhabitants of the complex, but they also met a grisly end: One magic-user among their ranks crossed dire rats and nasty dogs into a new, rapidly-spreading breed, the vermin dogs. These critters, aforementioned new monster, have spread, and slaughtered the derro – all but the mad mastermind that created them, who continues to labor in these darkened halls, half master, half prisoner of his creations.

This being may be found pretty quickly…or ignored altogether; a clockwork spider, dilapidated mining equipment and engines, all speaks of the tragedies, and the remains of the chief still hold the map to the wealth of dwarves – a nice way to seed the next adventure for the GM…and if in doubt, you can just have the map destroyed. Ultimately, the PCs will find the rather frightened Syriana. However, why would the PCs care about the story? Well, the adventure combines direct and indirect storytelling in an excellent and rewarding manner – The PCs can actually find out all of this via a ghost they can liberate and the things found throughout the complex.

Now, escorting the lady from the complex, we come to the one point that may sink the module for many groups: When stepping outside, the vizier of the Sultan awaits, alongside a massive force of soldiers: he tells the PCs to drop their weapons, throws their equipment into a fire-beetle pit and takes Syriana along. The Pcs are bound to stakes in the sand, left to die. Fighting, which many groups will want to, is a death verdict here – the forces arrayed against them are too strong, and the PCs are basically railroaded into giving up Syriana.

You see, unbeknown to the PCs, the Sultan’s haruspexes found out that she was the last member of a bloodline associated with a lesser known godling, Setenpre, associated with scorpions – her blood may be used to activate the eponymous Sarcophagus Legion, a potent undead legion. Via their own strength, or by some helpful dervishes, the PCs are free once more and then follow the trail of the vizier – thankfully, not all the force has accompanied the vizier – only his elite lizardmen janissaries.

Thus, the PCs get to explore the ruined temple of Setenpre, and they get the chance to save Syriana from the vizier’s blade, on a platform overlooking the dormant legion of the dead…but there is more in the complex, should the PCs choose to explore this complex. The indirect and direct storytelling employed within similarly manages to convey the complex’s story. There are unique hazards and adversaries to be found, and once more, the atmosphere is surprisingly concise and pitch-perfect.

Editing and formatting are very good on a formal level; on a rules-language level, we have the usual formatting convention-deviations, though these are concisely implemented. Layout adheres to a two-column b/w-standard and the pdf comes with solid b/w-artworks and functional b/w-maps. The maps do not come with a player-friendly version. The pdf comes fully bookmarked for your convenience.

Andrew Hind’s second module is something that will prove to be divisive. The transition from the first to the second dungeon is a bad railroad, from a design perspective. It’s not an elegant way to write the module and takes player agenda away – from a structural perspective, this alone, with the lack of player-friendly maps, etc. should knock this down to 3.5 stars.

I’m not going to do that. Know why? Because here, this may not be oversight, but conscious design decision. And I think I can prove that.

You know, this module is not simply a Sword & Sorcery yarn. It is a loveletter to the genre that gets it. From the darkened and degenerate first former inhabitants of the first dungeon to every single story-beat, from the subtle foreshadowing to the enemy choices, this PERFECTLY hit the nail on the head.

…okay, so I have to note something here: My childhood hero’s Conan. When I got to the US, I scoured the comic book stores for the “Savage Sword of Conan” b/w-books, as they’re prohibitively expensive in Europe. This module is, in a way, like a PERFECT “Savage Sword of Conan” story to play yourself. The module gets the tropes perfectly right without being derivative. It won’t win an originality award, but it’s nigh perfect in what it seeks to accomplish…and this, alas, does include the potential deal-breaker railroad in the middle.

In short: If your players and PCs can appreciate the like, then get this asap – this is an excellent little module, and for me, as a private person, this is a 5 star + seal of approval gem. It hits the themes and style I adore perfectly. However, as a reviewer, I have to take this structural issue into account, and same goes for the lack of player-friendly maps – as such, I unfortunately can’t rate this higher than 4 stars, but this still gets my seal of approval. If you enjoy Sword and Sorcery as a genre, get this!