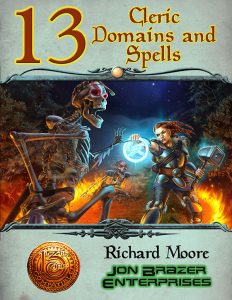 This installment of class expansion-pdfs clocks in at 12 pages, 1 page front cover, 1 page editorial, 1 page SRD, 1 page back cover, leaving us with 8 pages of content – these include a gorgeous full-page full-color artwork and the introduction.

The pdf begins with 3 new domains: The first of these would be Elements OR Weather – you choose one of the 5 base damage types, and may 3/session as a quick action to reduce damage of the chosen energy by d4 times Charisma modifier. As invocation, you may convert half damage of a holy damage-inflicting spell to the chosen energy type. The three tiered feats increase these damage reducing tricks in die size and net you additional energy types. The Epic feat allows you to provide 16+ resistance to a target protected and lets you use it offensively, making targets lose resistance or become vulnerable for Charisma modifier rounds.

The second domain would be Liberation OR Anarchy, which nets you a one-point positive relationship with an icon you don’t already have a relation with, once per incremental advance. The invocation lets a nearby ally pop free, which may, via the feats, be used as a free action even if it’s not your turn, also end the grabbed or stuck conditions and, via the epic feat, 1/day target all nearby allies with it. Cool! (And yes, the icon relationship angle does get a bit of GM-advice – kudos!)

The final domain presented would be Luck, which once per battle on respective turns as a free action, lets you or your allies adjust the natural value of a single d20 roll downward by 1. Allies need to be nearby. Cool! The pdf, alas, mirrors in layout one of the guffaws of the 13th Age Core book, namely that of the Love Or Beauty domain, which counter-intuitively put the invocation at the back end. I will not penalize the pdf for it, but it didn’t make any sense in the core book. That being said, the invocation allows for the reduction of a save difficulty, and the two feats (Champion and Epic tier) allow allies to not use these benefits and instead fuel a temporary increase to AC or PD based on escalation die, with Epic tier’s feat adding MD to the options. I like this one.

We get 3 new 1st level spells, the first of which would be the ranged divine opportunity, which targets yourself and an ally, allowing both to execute an interrupt action, which does count against the actions in the subsequent round. Higher levels yield longer duration and more targets as well as upgrading the interrupt to free. The adventurer feat speeds casting time up to a move action. The other two spells are both close-quarters, with martyr’s touch being a quick action spell with a 16+ recharge after battle. The spells allows for recovery transfer, with later levels allowing for immediate healing, hit point transfer of up to escalation die recoveries to multiple allies, capping at one per ally. The feats enhance recharge and make it 1/battle, via the Champion tier feat. Spark of hope is daily and you must be staggered to cast it; the spell targets a nearby foe and attacks via Wisdom + Charisma + level vs. MD, rendering the target vulnerable 18+ to the attacks of your allies until the end of your turn, as well as providing minor temporary hit points to nearby allies. The hit points granted and vulnerability improve over the levels. The Adventurer tier feat adds dazing, the Champion tier feat weakening.

The pdf includes two 3rd level spells: Compelling litany is a ranged, once per battle spell that targets up to 3 enemies and inflicts minor holy damage, but also allows you to prevent them from one type of action: disengage, intercept, making opportunity attacks. Higher levels improve damage and allow for more prohibited actions, with 9th level making enemies lose an action on their turn. The feats require that enemies save to end the spell and allow you to target less, but far away, enemies. Okay, do all enemies targeted have their own prohibited behavior, or do they have to share the same prohibited behavior? What does “lose an action” mean? Does the affected character get to choose which one to lose? This one needs clarification. The second spell, hallowed ground, is a close-quarters daily spell, and is really cool, offering holy damage based on escalation die, and alos allows you to mitigate environmental effects. The Adventurer feat makes this 16+ Rechargem the champion feat lets you cast it as a quick action.

The 5th level spells presented are both daily ranged spells: Castigation targets a nearby enemy with Wisdom + level vs. MD, causing holy damage and stuck on a hit, escalation die-based penalty to MD on a miss; Higher levels add stun and increase damage. The spell can be enhanced with a Champion tier feat, which adds a self-directed attack on a successful save versus the spell. Nice. March of saints can be cast for power or broad effects: This influences the damage and number of targets, and the spell targets PD. Odd: The cast for broad effect can be more potent than the power one, as allies may elect to target PD instead of AC in this variant. On a Miss, the target is treated as engaged, and when moving sans disengaging, takes half damage. The spell’s higher levels upgrade damage and targets. No feats for this one.

At 7th level, there are two more ranged spells: Divine dominion is daily and targets MD, inflicting either holy damage on demons, devils, etc. and hampers such beings, or assume temporary control over the target if its another type of creature. Miss adheres a roughly halved effectiveness. The Epic feat really rocks: Once per level, when hitting a staggered target, you can spend icon relationship points which came up as 5 or 6 to sway the target to your side! Really cool! Glimpse of perdition is a recharge 11+ one that can only target foes with 160 hit points (250 hp at 9th level – formatting is a bit awkward here) or less, targeting MD. On hits, the enemy targeted is temporarily helpless and must flee; on a miss, the enemy suffers from fear. Undead, devils et al. have a harder time ending the condition. The epic feat can banish such beings to their home plane or grave – neato. Foes thus sent away may return with a icon relationship to which you’re negative or conflicted. Nice angle!

Finally, there is one 9th level spell, the daily close-quarters deific weapon. The casting requires the cashing in of an icon relationship point for which you rolled 6, and you manifest the legendary weapon of your deity, overwriting any regular item chakra benefits. The weapon grants a +3 bonus and two epic powers. While escalation die is less than Charisma modifier, foes of your deity or icons you have positive relationships with, become vulnerable (16+) versus the weapon. When hitting such targets by 4+, you also ignore any resistances. Ouch!

Editing and formatting are good, though the aforementioned minor guffaw and some of the aesthetic formatting decisions slightly hamper the pdf. Layout adheres to a nice two-column full-color standard and the pdf comes with two great full-color pieces of artwork – kudos for such a small pdf! The pdf comes fully bookmarked, in spite of its brevity – once more, nice!

Richard Moore’s cleric options are my favorites among the 13th Age material he has so far released. There is more daring here – the pdf makes great use of the system’s escalation die and unique icon relations, rendering these effects really unique. While the minor guffaws noted slightly drag this down, it’s not by much – the pdf presents a well-designed array of tricks that dares to be creative: I’ll gladly take a minor glitch in an intriguing pdf over bland, but perfectly executed content. Hence, my final verdict will clock in at 4.5 stars, rounded up.