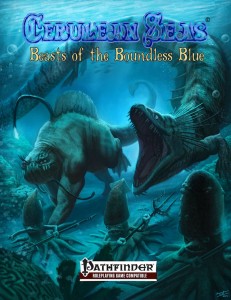 This bestiary of aquatic (and water/swamp etc.)-themed creatures is 294 pages long, 1 page front cover, 2 pages editorial/KS-thanks, 2 pages of ToC, 1 page SRD, 1 page blank inside of th4 back cover and 1 page back cover, leaving us with  286 pages of content, so let’s take a…

Oh boy, that’s a lot ground to cover, so let’s get started! Emily E. Kusbisz’s introduction explains what to expect from this book: First of all, all races introduced by Cerulean Seas-books get their own entries and the book also contains ALL Cerulean Seas-creatures contained in the various bestiary-chapters of the respective books released so far – several of which actually get new and improved artworks. Yes. Since artworks were a weak point of Alluria Publishing’s oeuvre. /sarcasm. Seriously – if you’re not familiar with Alluria Publishing’s offerings: These books look GORGEOUS. The artworks are often on a level that surpasses even what one can see in Paizo’s bestiaries. Yes, that good. But this is no mere compilation – we actually also get a rather significant array of new creatures – which by themselves would probably warrant the asking price.

“But I don’t use the Cerulean Seas campaign setting!” you’re saying? Well, the book takes the time and explains in detail the little peculiarities like depth tolerance, buoyancy etc. and explains how to hand-wave them if you’re so inclined. What I’m getting at is – this massive TOME is a stand-alone product that does not require Alluria’s other books. Even regular Pathfinder campaigns can draw from this material with ease. (Though any aquatic adventure benefits from having the very best underwater resources ever penned for any iteration of d20, but that’s just my opinion…)

The three subtypes of humanoids introduced by Cerulean Seas are also explained here before we take a look at the icons/creature glyphs that have become not only a staple, but a joy in every bestiary the folk at Alluria release: Each statblock comes with easily identifiable glyphs that denote the particular subtype AND geographic region in which the creature can be found. I didn’t believe it at first, but when pressed for creatures and skimming through these pages, the glyphs offer a significant amount of comfort for the beleaguered DM to choose the right creature at a glance. Now, if you’re looking for the original book in which some of these creatures have been released, a simple glance also unearths that, for the respective books also get their own glyphs. Adding the strawberry to the whipped cream, psionic creatures (fully compatible with Dreamscarred Press’ Psionics Unleashed / Ultimate Psioncs) also get their own glyph that makes it easy for fans of psionics to find them and for detractors of psionics to avoid them. Additionally, green dots mark player character races and beyond even the massive array of creatures from the Cerulean Seas-line, we also get references to Alluria’s excellent Fey Folio and Remarkable Races-series.

Now since I can hardly detail every creature herein without blowing this review up to novel-like lengths, let’s instead take a broad sweep, shall we? take for example the Mohir – representing the apex of the CR-spectrum herein (which ranges from CR 1/8 to CR 25), these behemoths of the deep sea may resemble angler-fish that let whales look like toothpicks, but they also are something different – sleeping titans from a past unimaginably long gone or visitors from another planet, Mohirs can send just about all creatures their gaze encounters into a dread, madness-filled stupor, unleash deadly blasts of plasma from their glowing tentacles or, yes, suck in all but the nimblest of foes. Terrifying engines of annihilation, these beings make even the mighty song dragons, of which this book delivers a whopping 13 varieties, tremble. Speaking of impressive apex predators – the new Leviathan Devil should also be counted among these threats – beings of vast power, these titanic hunters represent the ultimate expression of the sahuagin’s ideal of a hunter. And yes, at CR 20 they’d also make superb avatars of Dajobas or Sekolah in campaigns featuring these two entities.

Also rather interesting in a low CR-spectrum – the tentacled, orb-like douselings at CR 4 – predators of all things magical, these beings are superb guardian creatures that come with a constant antimagic field – ouch! Speaking of ouch – what about aquatic lycanthropes? Were-crocodiles, were-rays, were-seals, were-sharks and even were-squids can be found within this book, finally bringing the dreaded curse to the realms below the waves.

There are also new creatures herein that simply made me hungry – the CR 14 Meganantantia, for example: A whale-sized shrimp-like being that actually manages to look rather badass. Whale-sized. Shrimp. If these creatures existed irl, I’d be so all over them… *At this point the reviewer prepared his favorite chili-garlic-shrimp-ceviche before returning to the review* Among the more fun creatures herein would be the Moat Monkeys at CR 3 – remember those Sea Monkey-kits and their advertisements in various comic books etc.? Remember how dissatisfied we were when the actual creatures hatched and looked nothing like the humanoids depicted in the drawings? well, these creatures actually ARE those humanoids and stand ready to finally put an end to many a childhood disappointment…or as a safe way to exact revenge fantasies on them. Nice!

Not all creatures herein are beings of the oceans, though – brine and swamp, marshlands etc. also get quite a few rather iconic beings – take for example the swamp nixie – these fey may absorb and metabolize poisons and spit them at adversaries – oh, and eating them is not a smart idea…

Speaking of smart re mind – aforementioned psionic creatures also get new additions to their ranks herein, with for example the  deep sea-crab-like psion-race called Oceanari at CR 8. Have I mentioned the extremely awesome looking septapi, the 5 different types of ships of the damned (though these are haunted by some minor issues), the beach-combing, acid-spewing clawed Soak Bugs? Old man-like fey swathed in cloaks of crabs or intelligent aquatic fungi waiting for the “stars to align”? the sheer amount of monsters herein is staggering, but does not constitute all of the pdf’s offering.

4 simple templates, a brief discussion of monster types in aquatic environments, an art-index that properly credits all the incredibly talented artists that worked on this book, a glossary, a pronunciation guideline, extensive lists of aquatic weapons, armor and geopoisons, 8 pages of feats, aquatic environmental conditions (and e.g. rules for breaking through ice), 20 pages of aquatic spells and powers, indices of monsters by CR, by terrain type and by monster type and an extensive list of aquatic animal companions complete the deal and make sure that navigating this massive behemoth of a book remains comfortable. Have I mentioned that the index of appropriate creatures also extends to the Bestiary 4? The book also closes with a nice short poem, has has become the tradition with Cerulean Seas-books.

Editing and formatting are top-notch, I didn’t notice any significant glitches. In a book of this size. Go figure – it’s possible! Editors Ben Welsby, Jeffrey Turner & Steven O’ Neal have done a great job! Speaking of a “Great Job” –  the layout adheres to Alluria’s beautiful, slightly blue-tinged Cerulean Seas-standard and complements nicely the artworks. I’ve been there all the way through the d20-heyday and have a vast collection of bestiaries on my shelves and HD. The artworks in this one mop the floor with some books released by Wizards of the Coast and Paizo. Let that sink in. I’m not kidding when I’m saying that this book is the most beautiful bestiary I’ve ever seen a 3pp produce – PERIOD.

I usually don’t do this in that extent, but here it is justified:

-all of you artists DESERVE this shout-out. Why? Because almost universally, the interior art of roleplaying products has a hard time living up to the cover. Not so here. While not all of the artworks are this mind-blowing, the vast majority (and we’re talking about 98%) actually ARE. Yes, that beautiful. This book is insanely gorgeous to look at and even casually skimming through these pages makes you want to use these creatures. The only bestiaries I could mention from the top of my head that reach this abject level of beauty would be Legendary Games mini-bestiaries – but those work on a completely different scale.

What makes this even more impressive is the significant amount of organization that went into this bestiary – from extensive nested bookmarks to the appendices, using this book is as easy as humanly possible – also for non Cerulean-Seas-campaigns, thanks to the advice provided.

The new creatures are varied and live up to the highest standards one could wish for, often featuring not only one, but several unique signature abilities and making clever use of the rules. Moreover, even simulationalist DMs should get their fair use out of these creatures, as they feel at times as if taken from the deep sea biology book of another world – they make sense and feel coherent, logical in their niches and yes, even in the titanic sizes some of these beasts reach.

Reviewing this book was a monumental task that made me get even a tiny glimpse of what putting this together might have been like – a labor of love if there ever was one that breathes its flair from every single page and illustration.

The team of authors Sam G. Hing, Emily Kubisz, Jeffrey Turner & Matthew Cicci (many of which you should know as some of the finest monster-crafters out there) have woven a tapestry of creatures both profoundly disturbing and alien and at the same time beautiful – these pages perfectly encapsulate the wonders of the Deep Sea that are instilled by documentaries, diving etc. and add the spark of fantasy creative people tend to experience when confronted with beauty.

Superbly useful, supremely edited with production values of a whole new level that surpass even most kickstarted products (and their higher art budget) this book is THE ANSWER for any DM looking for any type of aquatic critter. Personally, I can’t imagine running “Skull & Shackles”, “Savage Tide”, “Freeport” or “Razor Coast” without the creatures herein (or the Cerulean Seas Campaign book, for that matter) – and in the context of the Cerulean Seas this book should be considered even more as something all but required. And yes, I was impressed – what drove me to the point of sitting slack-jawed at my desk was the price-point. At this quality, $20 would not have been too much for the pdf. Now look closely at the price and page-count. Yeah. I guarantee you won’t find a better bang-for-buck-ratio in ANY bestiary out there and honestly, even for the massive array of new creatures, the price would have been justified. This book is one of the rare examples that you can show to people and brag – gorgeous in production values and content, this demands to be rated as the apex of what can be expected and is hence a candidate for my Top Ten of 2013. Final rating? Oh, if only there were six stars. Since there are only five, I’ll instead settle on that and add my seal of approval. Books like this make reviewing worthwhile.

If you only remotely are interested in beautiful bestiaries and awesome aquatic monsters, then this should go into your shopping cart right now.

You can get this superb bestiary here on OBS!