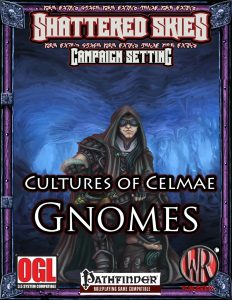 This installment of the Cults of Celmae-series clocks in at 18 pages, 1 page front cover, 1 page editorial, 2 pages of SRD, 1 page back cover, leaving us with 13 pages of content, so let’s take a look!

We begin this installment with a brief recap of the gnome’s mythology – when forge father Adan’s hammer blows created the azer, the sparks of his forge also made the dwarves and gnomes and, according to gnome myth, it was the gnomes that carved out Teran-Jarraian, the world below. As the myth states, it is during this age they made contact with the devastating gugs and pioneered many spells now common to spellcasters across the nations of Celmae. In this golden age, they raised a subterranean library of untold knowledge, but it would only be a matter of time before strife would send their realms into chaos, as the dwarves proceeded to breach the Deep Ore sphere in their quest for the legendary deep ore and thus instigated the core calamity of the setting: As magma erupted and the shattering began, gnomish wards failed and foulest monstrosities were spread across the lands; dragons awoke and the gnomish hero Kremenesh sacrificed himself and his comrades to reseal the dreaded World Dragon, ascending thus to god-hood – and ever since, the gnomes have started adapting among their shattered home, its cultures and environments…though, understandably, there are serious resentments towards the dwarves still lingering.

The myth-weaving in this history is pretty evocative and in fact, exceeds in prose quality that sported for the dwarves, making this a very interesting start for the pdf! Okay, racial trait-wise, the race is split between svirfneblin and the gnomes that took to surface and skies, the pech. Svirfnbelin mostly adhere to the racial traits we know, with some tweaks: Their hatred applies to reptilian humanoids and dwarves instead of goblinoids. They have slow speed in Celmae and receive a dwarf’s stonecunning. They also lose fortunate’s save bonus and low-light vision and the Stealth-bonus, tough the Craft (alchemy)- and Perception-bonuses remain – the former is btw. formatted as “Craft Alchemy.” The SPs of the race are not italicized either and the attribute bonuses are not properly bolded – both of these formatting issues can be encountered multiple times, so if you read me referring to a SP, expect its formatting to be wrong. As a whole, a sensible nerf of the pretty strong base race.

Alternate trait-wise, these guys can replace defensive training with a 1/day darkness SP – that also features the following sentence: “A svirfneblin with the skilled racial trait gains a +4 bonus to Stealth skill checks to hide within the are affected..:” – which constitutes, alas, a pretty nasty fault: You see, svirfneblin in this iteration do not receive the skilled racial trait – it has been broken up into components, making this, RAW, not work. Darker SPs (that are formatted differently than those among the base racial traits) can be found…as can Spell Blocker, which is OP and does not work: When an arcane spell fails to pierce the svirfneblin’s SR, the caster may not target the the svirfneblin again for 1 round – no save. It also replaces skilled and alchemical insight, which is puzzling – the base race does not have the “skilled” trait anymore. Speaking of problematic: What abut a constant, level 1 nondetection instead of the usual SPs, PLUS several stone-related high-power tricks? Yeah, not even trying to look balanced here. The final alternate trait works -+2 AC versus aberrations, +1 to atk, replacing hatred and defensive training. 1 out of 5…is not a good quota, particularly considering the easy nature of the design-task here.

The pech gain +2 Dex and Cha, -2 Str, are slow and Small and receive the gnome magic. They gain +2 to saves versus fear, illusions and halfling luck. Skill-wise, they gain +2 to Perception and Acrobatics. Both gnome subraces receive proficiency in both gnome and halfling weaponry. In case you haven’t noticed – pech are pretty much the replacement for the hairy-footed race.

The alternate racial traits for the pech allow you to lose the Acrobatics-bonus in favor of 30 ft. movement, with another replacing that and the Perception bonus in favor of Perform and Craft, while Wanderlust diverges from the benefits of the trait with the same name: Instead of the fear-save-bonus and hafling luck, you gain +2 to Knowledge 8geography) (correctly formatted!) and Survival as well as +1 CL for spells that enhance movement. 3 out of 3. Nice job.

The first city featured herein would be Carbas…and it is not a nice place: The inhabitants of this dismal subterranean place are afflicted by incurable black sores, as weird mold grows and the very walls ooze slime: The legendary city of gugs, Ukosh, once sealed, lies below – and its corruption seeps from the black monolith to the realms above….oh, and if that is not enough, the realms elow also hold Celmae’s most notorious, magic prison. A look at the settlement statblock won’t make you wonder why the place has a danger rating of +43.

Now, I already talked a bit about the hero Kremenesh and his sealing of the World Dragon and ascendance to godhood, but the pdf goes one step further, sporting a detailed, two-page recap of the legend in nice prose – much like Carbas, the flavor is certainly nice and interesting.

The pdf also contains a new hybrid class, the shadowskiver, who receives d6 HD, 6+ Int-mod skills per level, proficiency with simple weapons, longbow, shortbow, rapier, sap, shortsword, whip and shields (excluding, as almost always, tower shields) and light armor. They gain Charisma-based spontaneous arcane spellcasting drawn from the bard’s list of up to 6th level and sport a 3/4 BAB-progression alongside good Ref- and Will-saves. The class receives sneak attack at first level, increasing the damage output every odd level thereafter to a maximum of +10d6. As a purely cosmetic complaint, there is one instance in the table where the “d” in the sneak attack’s damage tally is capitalized.

The hybrid class, as a whole, while not perfect, is a decent take on the shadowy rogue with spellcasting. Its very potent shadow tricks are somewhat mitigated by them being…well…squishy. Very, very squishy. However, it does have some issues: For one, its ability-progression basically forces you down one path – there is no choice here. One shadowskiver will be just like another. It has exactly 0 player agenda. Secondly, and more importantly – the niche’s been filled by vastly superior takes on the concept. If you’re looking for a light/dark-oscillation, going for Interjection Games’ antipodism-classes will have you covered. If you don’t want the nice variant system these use, I’d point you towards Ascension Games’ excellent Path of Shadows-supplement instead.

The pdf also features racial feats, 4 for the svirfneblin, 2 for the pech: Svirfneblin can have a Dispelling Touch, which is interesting: 1/day (+1/day for every 4 levels), you may execute an attack as a full-round action. On a hit, you greater dispel magic and the opponent receives your SR, non-lowerable, mind you, while you lose it, with the transfer lasting for character level rounds. The feat can’t affect characters with SR. As a minor nitpick here: I assume you can’t have more than one use of the ability in effect at any given time – explicitly stating that would have been helpful. Still, I like this one – the daily limitations make sure it’s properly kept in check, though the dispelling fails to clarify its CL. Not perfectly operational, but nice. Keeper of Secrets boosts your saves versus an array of mind-influencing/probing effects, while Knucklebasher is pretty cool: It lets you perform AoOs versus Large and larger creatures as though you were adjacent to them, provided they miss you. Nice one, and has a per-round limit that prevents abuse. The final feat basically nets you a type of freeze. Yeah, not too excited.

The pech feats let you treat, for class level round per day, a skill as a class skill or gain proficiency in a weapon., while the second feat lets you reroll a save versus an effect that results in a fear-based condition up to 2/day.

The pdf also contains 3 new background traits, all of which tie in well with the racial history of the gnomes, no complaints here! The pdf closes with 3 racial spells – detect kobolds is self-explanatory, while aura of inconspicuousness is interesting in that it only affects beings under nondetection and imposes a penalty on noticing them, based on the target’s HD. Finally, renew air is basically a nice spell-version of the gas-annihilating spells of former editions.

Editing and formatting have improved in comparison to the previous offerings, though missing letters, missing italicization and obvious cut-copy-paste remnants are still here. Layout adheres to a nice two-column full-color standard and the pdf’s artwork is pretty nice, though I have seen the majority of it before. The pdf comes has no bookmarks, which constitutes a comfort detriment.

Robert Gresham, with additional design by Jeff Gomez and Jeff Lee, has improved his prose over the last installment – the shattering as a hallmark and the nice fluff in this book is more refined and reads better than that in previous iterations of the series….to the point where I honestly would like to read more about the setting. So that’s a definite plus. On the down side, the formatting is pretty bad and could have used an at least casual glimpse by an editor/proof-reader. The fact that the svirfneblin alternate traits are mostly RAW not operational is a big downside, as is the fact that their balance is wonky. The base race-modifications are decent enough. The shadowskive is a better class than the one the dwarves got, though it does suffer from being very squishy and very linear – from power-levels to design-asethetics, it feels more like a 3.5 class than a PFRPG-class, with no choice, no player-agenda whatsoever and all unique abilities delayed to the higher levels. So yeah, while the craftsmanship is better, it’s still not a class I’d consider a worthwhile addition to any game’s roster.

On the plus-side, there are some gems in the supplemental material; from traits to feats and spells and the legend provided certainly paint a nice picture. HOWEVER, from a crunch point of view, I wouldn’t consider these sufficient. Whether to get this or not ultimately depends on if you’re interested in the setting or not: If you are, then this does deliver some nice ideas, a cool city (definite highlight herein!) and some nice fluff. If you’re primarily interested in rules, however, I’d suggest looking elsewhere. In the end, this is a bit better than the dwarf-installment, but not by enough to elevate it beyond a final verdict of 2.5 stars. Whether to round up or down depends on what you’re looking for. Due to my in dubio pro reo policy as well as the low price, my official rating will round up.