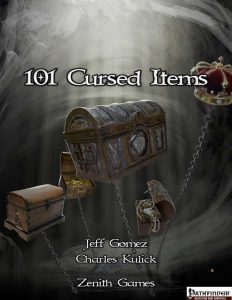 This supplement clocks in at 29 pages, 1 page front cover, 1 page editorial, 1 page SRD, leaving us with 26 pages of content, so let’s take a look!

Okay, so, the pdf begins with cursed item rules: Spellcraft 15 + item’s CL after identify et al. to note an item’s base properties, with DC 25 + item’s level denoting the cursed properties. Discarding cursed items is not automatic after remove curse, as the pdf specifies once more, but the pdf also specifies that this spell does not de-curse an item…obvious, but still handy. Intentionally and accidentally crafting cursed items is covered, and the pdf touches upon selling cursed items and where to buy them. The pdf, after this handy recap, presents optional cursed item rules, starting with automatic identification, carefully hidden curses and more complex curse removal scenarios. Degrading magic and particularly resilient cursed items are also touched upon. Nice array of options here.

Okay, so, what kind of curses do we get? We begin with the amulet of chatty fists, which makes the wearer’s hands sentient, obnoxious and chatty…and item whose curse can range from hilarious and kinda welcome to plain funny or gratingly obnoxious, focusing on the roleplaying aspect – something I genuinely liked seeing. Boastful sniper goggles are clearly worn by plenty of anime characters, for the wearer executing sneak attacks is compelled to boost about them. There are figurines of wondrous power that are berserk when activated, and figurines that work properly, but have a chance to turn the user into a figurine for the duration.

On the more mechanical note, the amulet of cumbersome flesh makes sense, as it does act like an amulet of natural armor, but also greatly increases armor check penalty. Boots of endless levitation make you levitate up to 2000 feet…and there are boots that levitate you upside down as well. What about a bracelet of friends that is missing an “r”, thus conjuring fiendish doppelgangers, while delaying the arrival of the target? Or what about a resilient ore that instead increases fire damage and makes the wearer vulnerable to fire? On the plus side, the latter item actually helps against the cold… The ring of delayed shielding stores an ammunition in an extradimensional place, delaying being hit by a blast from it. Clever: The damage is converted to force, preventing abuse. This has tactical value, narrative potential – love it!

The backhand of glory had me laugh out loud, as it essentially pimp-slaps the user (properly codified re damage type etc., mind you) for using some abilities. The robe of useless items also had me seriously chuckle. What about the bag of rabid animals, which does exactly what you’d expect it to? Or the cloak that makes you do a victory dance when you successfully save against an effect (no save)? The ring of the spell store infests the casting of the wearer in-game with microtransactions, demanding to be paid. Another favorite of mine: The rope of motivational climbing, which sets itself ablaze like a fuse, requiring quick climbing. Also explodes at the top. Genius! The shoes of the hurried firewalker similarly made me laugh – they do pretty much what you’d expect them to.

There are also items that are just nasty – like a cursed campfire bead that actually only generates an illusion of fire. Know that dream, where you fall to your death, only to awaken right before hitting the ground? The cape of the waking nightmare twists the sequence, teleporting you up when waking up or attempting to use its effects. Ouch. Or the cloak that baleful polymorphs you into a Fine spider? Some goth ladies I know obviously suffer from the corset of wiry witchcraft, which inexplicably snags on nearby things, making movement more difficult. What about the cursed vest that shrivels your eyes when attempting to use the deadeye deed? Sandals that may cause you to bond with trees akin to dryads? There is a belt that transforms head and torso (and only those) into that of a fish – hope that some water’s around (and this one can make for a really clever investigation angle…). What about horseshoes that transform creatures into tikbalang-like creatures?

The pdf also provides a variety of magical goggles that could dazzle you, cause near-sightedness, and what about a helm that makes you comprehend only one language. Helms and boots of sloppy teleportation are pretty much classics form the get-go, and what about an unreliable handy haversack? But there are also items that can arguably be rather potent when handled properly: Provided you can withstand the effects, the cursed horn of befouled air, a horn of fog variant that produces cloudkill centered on the user, can be rather cool. Rings of both-eye blinking are also clever – they do teleport the wearer, already…but they also force their eyes shut for a minute! Rods of maximum security send targets to a hellish prison, and the rod of wander actually may be better than the item it mimics, as it gets you away in a reliable manner…but sans control of where…

On the twisted side, what about a robe that steals your face, making you featureless (and very creepy) and blind/deaf/incapable of smelling unless wearing the robe? What about boots that let you cling to undersides of horizontal surfaces, but, alas, which get stuck? Super sticky finger gloves, or a chime that opens a portal to a detrimental room? Need an item that will result in a ton of raunchy heckling at the table? The wand of dribbling fireballs has the fireball dribble out, detonating in the user’s space. XD

The pdf does not stop there, though – beyond all these specific items, we also have a selection of 21 common curses and drawback qualities that can reduce item prices. These range from the standards to baleful advertisement curses! EEEEEWWWWW. Did I mention that I really like this book??

Editing and formatting are very good on a formal and rules language level – better than usual for Zenith Games, in fact. Layout adheres to Zenith Games’ no-frills two-column b/w-standard with red headers, and the pdf employs public domain and stock art. The pdf has no bookmarks, which is an unnecessary comfort-wise downside of an otherwise great book.

Jeff Gomez and Charles Kulick, with contributions by Kate Baker, Nik Geier, Kiel Howell, Matt Oatman, Andrew Ready and Maria Smolina, deliver a grand pdf. In fact, this is easily my favorite Zenith Games-book from all the ones I’ve covered so far. The cursed items herein are consistently cool: They are mechanically relevant without being bland; they often are clever, witty, and even funny. You know, in the way that’ll have your players laugh and say “Well played!” while their characters suffer. It’s not just fun and games, though – there also are plenty of different options that feature themes you’d associate with fairy tales, and there are a lot of cursed items herein that your players might actually want to keep around for some trickery. In short, this book is a resounding success with an excellent bang to buck ratio. Usually, the lack of bookmarks would strip the pdf of my highest accolades, but this one is simply too fun, too captivating, to penalize. 5 stars + seal of approval, highly recommended!

You can get this massive amount of cool cursed items for just $2.99 here on OBS!

If you’re enjoying my reviews, please consider leaving a review here, or joining my patreon.