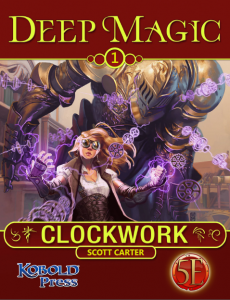 This installment of the Deep Magic-series of 5e-pdfs clocks in at 19 pages, 1 page front cover, 1 page editorial, almost one page of SRD, 1 page advertisement, leaving us with 14 1/2 pages of content, so let’s take a look!

There are few aspects I associate as much with Kobold Press’ phenomenal Midgard-setting as clockwork magic. (In fact, only one: Fey…but I digress..) The magic which spread from the by now legendary city of Zobeck across the disk (Midgard’s flat) is evocative and interesting…so how has it been translated to 5e? Well, beyond two clockwork-associated gods (surprisingly missing Rava!) after a brief introduction to the history of clockwork magic, we dive right into a new cleric domain, the, surprise, clockwork domain.

The domain nets proficiency in clockmaker’s tools and heavy armor as well as advantage on attacks versus clockworks and constructs, with the spell-dispersal making sense and good use of the new material herein. Channel divinity lets the cleric hijack constructs if they fail a Wisdom saving throw – if they badly fail their save, the control extends in duration. Starting at 6th level, spells used to repair damage to clockwork creatures etc. always restore maximum possible hit points, which I consider problematic, considering the presence of a clockwork PC-race among the roster for Midgard – a purely gearforged group, for example. 8th level, you can designate a controlled construct within 60 ft. as a viable target for spells that usually only target the cleric. 17th level nets the ability to merge with a construct controlled, restoring all hit points. For the duration, you gain all immunities and qualities of the construct and may cast spells, use class features, etc. This can only be used once per long-rest-interval. I assume that this includes access to the special traits and features of the creature merged with, but I am not 100% sure – the ability could be slightly more precise here.

The warlock also receives support here, to be precise, the great machine patron. At 1st level, the warlock may decide to spring ahead in the initiative order to right before a given creature, and yes, this ability is concise and covers the changes in the order properly. This one, much like 6th level’s ability, recovers on a short or long rest. 6th level’s ability lets you reroll a missed attack witha dvantage. 10th level provides immunity to psychic damage and mind reading, unless you allow it and 14th level allows you to designate a creature within 60 ft. The creature must succeed a Charisma save versus spell save DC or take 10d10 psychic damage and must make another Cha-save to avoid being stunned for 1 minute. Once again, short or long rest to recharge.

Pact boon-wise, the warlock may choose a clockwork familiar, a changing blade or a pocket-sized device that replaces a book. Three eldritch invocations allow for gear barrage, +1d6 fire damage in melee and reflexive 1d6 fire damage as well as the option to overcome construct immunity to being frightened and charmed.

Wizards may opt for the path of the clockwork mage, who gain an aforementioned clockwork familiar. Their school lets them halve time and gold it costs to add a clockwork spell to the spellbook. The duration of animate constructs increases by proficiency bonus minutes, with 20th level providing permanence instead. 6th level nets metal shape, which lets you reshape metal of size Small or smaller under your control. Here’s the amazing: For once, the ability requires familiarity with an object – no easy cheating via key-generation. Cool! 10th level nets golem form, which lets you retain mental faculties, but lets you assume the physical characteristics of a golem/clockwork creature with a CR less than the current level, lasting up to 1 minute per level. 14th level allows for an Int-based hijacking of constructs, analogue to the cleric tricks.

The pdf, after several class lists of spells, then begins to introduce new and updated spells: These include absolute command that lets you issue commands to constructs, animating constructs with size by spell slot and base stats for each. Armored heart nets an interesting option to, as a bonus action, gain resistance to the 3 physical damage types for 1 round, enhancing potential defense/withdraw-sections. Taking on a zelekhut’s powers (stats included) – there are some cool tricks here. EDIT: catapult now specifies the damage type it inflicts

Rust is added to the list of afflictions available via contagion…all in all, a well-made selection of options. You don’t know what rust does? Well, thankfully, the pdf does cover this! A ritual for hellforged gearforged allows for an interesting variant of the gearforged race. Sacrificing a construct to temporarily imbue a target with construct-tricks…very cool. Speaking of which – have I mentioned the spell that uses a music box to rip open the planes, allowing them to partially overlap? Pendulum is interesting as well, locking d20-throws at 20, 1, 19, 18…which is generally cool, but considering that it’s concentration, up to 1 minute, it kind of loses a bit of its sting and is a better buff than debuff, which is pretty surely not how it was intended, unless it’s supposed to be just one half swing of a pendulum. Interaction with memory gears and winding keys is intriguing.

Editing and formatting are very good on a formal level and now also on a formal level. Layout adheres to Kobold Press’ beautiful 2-column full-color standard and the pdf sports high-quality artworks. The pdf comes with basic bookmarks for the class features, but not the individual spells.

Scott Carter’s translation of clockwork magic to 5e constitutes a well-crafted first installment for the series, though one that misses a couple of minor beats. There are some serious gems here and much of the interaction with e.g. gearforged etc. and the magic aspects that are integral to Midgard have been properly presented. While not perfect, this is a nice, inexpensive pdf and as such receives a final verdict of EDIT: Some glitches have been ironed out, which adds + 0.5 stars to the final verdict. Due to my in dubio pro reo policy, the final verdict will be rounded up.