Hammers of the God (OSR)

Hammers of the God (OSR) 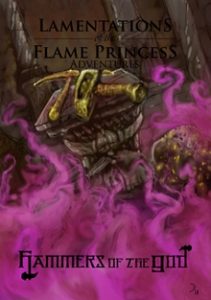 This massive module clocks in at 86 pages, 1 page front cover, 1 page editorial, leaving us with 84 pages – these are A5-sized (6” by 9”) and thus, you can fit up to 4 on a given sheet of paper when printing them out. The font-size is appropriate when doing so, mind you, so no undue straining of the eyes.

All right, it’s a trope as old as fantasy gaming (older, in fact!) – the dwarven empire/civilization that crumbles. We’ve seen that before, right? Well, as it happens to be, the PCs have come into the possession of a map, which will lead them straight to one of the lost places where dwarves once dwelt. Now, as you may have gleaned by this, the module thus requires a dwarven civilization, yes…but as a whole, any referee worth their salt can add this into LotFP’s pseudo-17th-century setting with minimal tweaking/emphasis of the mythological nature of these beings. The module is intended for characters level 3 – 5, though even stronger characters should still be sufficiently challenged by this. In case you’re wondering, btw. – this is pretty much PG-13. While certainly not the most light-hearted of romps, it is not a grimdark or particularly gory/depressing module.

Anyways, the module does not take any prisoners and begins pretty swiftly and with a resounding drone…From here on reign the SPOILERS, so potential players should skip to the conclusion.

All right, only referees around? Great! So, there are some common characteristics we ascribe to dwarves: They are stoic and pragmatic conservatives that carry grudges. So, what if the collapse of their empire was not one brought about by external threats, but by a series of well-intended decisions that ultimately brought down the culture…you know, like empires are wont to. To a certain extent, this reflects a downfall that was a whimper, not a bang. The dungeon the PCs are about to explore represents the very final death-throes, where the propensity for devastating grudges and shame turned towards self-destructive behavior on a massive scale. Below cascading purple mists, the PCs will find the remnants of an ancient massacre between humans and dwarves, undisturbed for ages untold.

When mankind entered the dungeon, the dwarven high-priest reacted to the failings of his clansmen in holding the intruders at bay with the spiteful, grudging finality of the ancient religion of the old miner, crushing specially prepared seeds which created the ever-present purple mist, its toxicity negated by the aeons, the mist may now only be cosmetic…but that does not mean that stupid PCs may not dig themselves a horrid grave here.

Now, I mentioned how the complex had rested undisturbed for ages and indeed, the module manages to convey a stunning and evocative sense of antiquity via its prose and internal consistency – combat-wise, there is not that much to defeat but animated dwarven spirits, more automatons than free-willed undead, as the PCs explore these ancient halls…but there doesn’t have to be that much in this regard. The module reaches a level of detail that eclipses that provided for most dwarven sourcebooks I’ve read and evokes an overall sense of truly evocative consistency that is mirrored, time and again, in the varioustidbits and dressings provided – in some cases, literally.

There would, for example, be the tradition that EVERYTHING about an important dwarf’s life should be chronicled…and thus, there are halls, where rune filigree-layer lies upon layer, with the intricacies of various layers and their exploration yielding new knowledge. There is also the library, which best exemplifies the truly impressive attention to detail this module sports: The library, you see, contains no less than 100 books. Here’s the thing: There is a cliff-notes version provided for EVERY SINGLE ONE OF THEM. I am so not kidding you.

Players and PCs interested in lore will have a true field day here and, more importantly, the books will provide actual benefits to the party, should they exert the due diligence and properly do their legwork. There is, for example, one trap, aptly called juggernaut, which is one of the two bottlenecks of this dungeon’s exploration – a gigantic mechanism that may very well squash the whole party…but if they have taken care, it won’t just boil down to quick wits to escape this doom. Much like all good modules, this rewards smart players and not just good rolls of the dice.

If you’re into lore-rich modules, I will have probably sold you on this already, but it’s important to mention that the religious doctrine and principles of the Old Miner’s faith is mirrored in the challenges faced and that it is lore and attention to detail and player participation that will yield the true treasures of this module…while greed and the mindless plundering of tombs may well see the PCs stranded with cursed items and an immortal nemesis at their heels. Both are by no means mutually exclusive, mind you…though the true treasure as such lies in a portion of the complex the PCs may well never get to see.

You see, the monumental sense of antiquity evoked is constantly underlined not only by the grandeur of ancient dwarven designs and monumental pomp, but also by the subterranean nature of the complex: In the instances where the PCs reach “open ground”, the sheer vastness of the realms below, the limitation of both light and darkvision in the endless black, are used in amazing ways: When the PCs walk an arch of stone over a gigantic, black chasm, lose track of the place they came from and only see the arc ahead, while hearing a myriad of *things* in the dark, only the most jaded or foolish of players will not become uneasy. Similarly, at the shore of a subterranean lake, there lie strange towers, high beyond the radius of any illumination the PCs are likely to have – and these towers, in fact, are type of crane that interacts with strange metal tubes…airtight quasi-submarines that need to be navigated through a whirlpool to gain access to the second part of the complex. Navigating the tides is VERY lethal and anyone foolish enough to try the outside will notice this the hard way – and indeed, dealing with the crane in this subterranean harbor carries its own risks. Oh, and PCs better check the tubes…they’ve been here a long way. Oh, and airtight, so think twice about torches…Yeah, this is most certainly something that not all groups will enjoy, because it is PROBLEM-SOLVING that is not contingent of rolling the dice. Personally, I absolutely LOVE it. We need more of the like.

So yes, this dungeon feels more like a true archaeological exploration and more like a true journey of discovery than your average hackfest; it is a module that, from rooms of ritual shaving to strange devices and lethal traps, rewards getting into the mindset of the culture, rewards behaving like an explorer of a civilization fallen and gone. This is a harsh module; it is NOT easy. However, at the same time, it is exceedingly fair – unless you consider PCs being bitten by potentially lethal snakes for poking sans checking, their finger into a hole bad form. Personally, I like that. I like that, by virtue of the impressive atmosphere, the PCs are faced with a complex that DEMANDS respect…but that also deserves it.

If all of that sounds very conservative, then rest assured that the PCs have the chance to not only find and fight the dread transmorph, which oscillates between forms and attacks, but also may poke through a wormhole…and potentially be poked back. Have I mentioned the chance to get a hyper-deadly butterfly that will kill the first living creature the PCs encounter after leaving the complex? Yes, there is the delightfully weird aspect, though it is, fittingly, I might add, subdued compared to the stars of this module: The complex and culture of the ancient dwarves.

The pdf, just fyi, comes with a solid map of the complex – no player-friendly version is included, but considering the fact that this complex very much lives by means of exploration, I am okay with that.

Editing and formatting are very good, I noticed no glaring accumulation of glitches. Layout adheres to a 1-column b/w-standard in A5 (6” by 9”) that comfortably fits 4 pages on one sheet of paper. Big plus for me, as a dead-tree purist: The printed out version is easier to read than previous LotFP-offerings when thus printed. The pdf comes fully bookmarked for your convenience. The pdf sports several nice 1-page original artworks – one of which in full-color, while the others are b/w – in particular the campsite at the subterranean body of water drives home perfectly the sense of gigantic proportions and solitude.

James Edward Raggi IV’s “Hammers of the God” is a phenomenal module that borders on being an environmental setting book. I have rarely seen a complex presented this concisely, with an impressive thematic and internal consistency. The ancient dwarven culture depicted herein, with all its small peculiarities and aspects, is evocative, intriguing and provides an exceedingly strong leitmotif for the module. It can also be easily transplanted into just about every setting and manages to make the dungeon the star: More often than not, my insistence on cool terrain features and hazards is read as a condemnation of classic dungeons. Far from it! This module very much exemplifies what you can do with a VERY classic trope, how you can make one of the oldest concepts and make it shine – by details, details, details and consistency. Few modules have managed to capture the sense of being an adventurer exploring a complex with a distinct identity this well; at no point will anyone confuse this module’s dungeon for any other dungeon. This has a unique, glorious identity. It, much like the “Grinding Gear”, also rewards smart players, as opposed to optimized characters. No matter how lucky or optimized your characters are, they can and will die in these halls if the players don’t act smart. You know. Like in a game less based on rolling dice and more on the wits of the players.

Now, don’t get me wrong – there is plenty of dice-rolling…but personally, I love how this rewards brains over luck and how it has the guts to say: “Okay, you found the treasure…do you really want to plunder that tomb over there? All right, so these are the consequences…” Greed is not necessarily punished, but the rewards gained from it are double-edged and cut both ways, whereas understanding and dealing with the culture of the complex in an even-handed manner will yield slightly less treasure, but it’s true treasure sans strings attached… This is a module that rewards choices above all else and does not hesitate to show the consequences.

As a whole, this can be summed up as one truly astonishing, well-crafted exploration of a fantastic complex, one that will bring a smile to any group that loves exploring sites with a rich and vibrant culture and history, as a harsh, but also fair module that provides challenge and wonder galore. This module, much like Grinding Gear, is good enough to convert to other systems, should OSR-gaming not be exactly what you’re looking for; it makes for an excellent scavenging ground for ancient dwarven cultures and complexes and represents my reference module for dwarven complexes, kept from even higher accolades only due to the lack of a player-friendly map to cut up and hand out…but then again, drawing the map’s supposed to be part of the exploration….Anyways, my final verdict for this gem will clock in at 5 stars + seal of approval.

You can get this excellent module here on OBS!