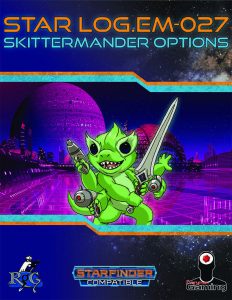 After a cool (and rather extensive!) contextualization of skittermanders within the Xa-Osoro system, we begin with the skittermander paragon archetype, who receives an alternate class feature at 2nd level: Whenever the paragon spends 1 point of Resolve to take a 10-minute Stamina break, they also regain the daily use of the hyper racial trait. Additionally, skittermander-prereq-feats may be taken as replacement class features at 6th, 12th, or 19th level. Minor nitpick: The pdf reads “0r.”

-Boundless Energy: Only for paragons of level 5+. Regains hyper racial trait even sans Resolve expenditure to regain Stamina after a 10 minute break.

-Helpful Hand: Increases aid another, covering and harrying fire bonuses by +1; doesn’t stack with other effects. You can spend 1 Resolve Point to extend a bonus you grant to last until the end of the target’s next turn.

-Hyperactive Leap: Athletics as a class skill, +1 to Acrobatics if you already have it. Always have a running start, and better vertical jumps. Utterly HILARIOUS: While hyper, you get an Ex fly speed that needs to end on solid ground or fall. Basically, I picture skittermanders wiggling their arms like a hummingbird on a sugar-high. XD

-Limitless Leaper: Builds on the previous one; you no longer have to be hyper.

-Mania: Use hyper as a reaction when gaining a morale bonus, taking an extra move action. Alternatively, you can forego this to increase the bonus by +1.

-Reflexive Assistance: Builds on Helping hands: Lets you aid, cover fire, etc. as a reaction when an ally does so. There’s a typo here: “Whenever an ally grants uses the aid another..:” – that “grant” should not be there. The rules language here is pretty complex, but it’s handled well.

-Skitterspider: Builds on climbing master, lets you traverse ceilings and vertical surfaces sans Athletics, as per spider climb. (Spell-reference not italicized.) Upside down climbing does not allow for the use of the run action, but otherwise, you may run while climbing. Note that this is better, since the skittermander can use 4 of its limbs to satisfy the climbing requirements!

-Skittermander Suplex (Combat): Here, something has gone awry with the rules language. “Whenever you successfully renew a grapple against a creature that you were grappling at the start of your turn, dealing damage to the grappled opponent as if you had hit them with an unarmed strike.” Either “dealing” should read “you deal”, or there is a part of a sentence missing here. I assume the former, since the damage is notes as grapple attempt minus opponent’s KAC, minus 8.

The pdf also includes two new biotech augmentations: For arms and a lousy 100 credits, you can get Hideaway Hands, which allows you to retract a pair of arms, which can be really helpful re Disguise. The torso can be enhanced with larva-drool tissue, which reactivates the gland producing the numbing agent of skittermander larvae, allowing you to excrete it as a swift action when renewing a grapple. The foe must save or basically suffers from disadvantage when trying to escape the grapple. The effect is precisely codified regarding type and duration, and it requires the grappler trait and the character must be shirtless or have custom clothing/armor. It can be used again after a rest and a 2 Resolve Point expenditure. Finally, we have a cybertech augmentation, nurse’s eyes, when nets 10 ft. blindsense (life) and better medical skills – such as biological anomalies automatically detected in creatures identified with life Science. I’m not a big fan of the “automatic” here.

Editing and formatting are still good, but not perfect – there are a few formatting hiccups, and the glitches, alas, can impede rules integrity slightly. Layout adheres to the two-column full-color standard of the series, and the artwork is, as always, nice. We have no bookmarks, but need none at this length.

(X) Put a big “X” here if you think that skittermanders should be frickin’ core. They are an amazing race, and I love them to bits. And Alexander Augunas gets them. The flight feat and spider feat with their tactical (and hilarious!) implications alone warrant imho getting this one. That being said, I do think that hyper can, in the long run, potentially become problematic due to SF’s more transparent action economy, so that’s a thing to look out for. But that just as an aside. I did enjoy the vast majority of content within, and as such, my final verdict will be 4.5 stars, rounded down for the purpose of this platform.

You can get these cool options here on OBS!