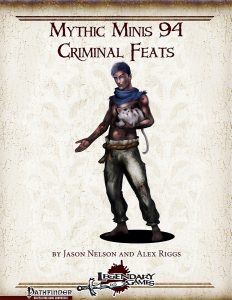 -Careful Sneak: Ignore penalty for medium or heavy load while sneaking slowly; while less encumbered, you can Stealth while adjacent to cover or concealment and retain said cover for progressively harder penalties. Also enhances surges for Stealth. OH BOY, I LOVE this feat. Seriously, this is a prime contender for being scavenged for houserules if you’re looking for a more Thief/Dishonored/etc. Stealth/Intrigue-heavy campaign. Two thumbs up!

-Cooperative Disabling: When being aided disabling, little failures count as you having helped your ally and 5+ failures only count if both have failed this bad. Cool!!

-Criminal Reputation: Bonuses apply to all influence checks and discovery checks with the individual influence system., but only versus criminals favorably inclined towards criminals. 10 ranks in the respective skills net the increased bonus. Also enhances Leadership, if present, but only if all followers belong to certain crime-themed classes. Very cool Godfather-style feat.

-Exquisite Sneak: Ignore ACP for light and medium armors to Stealth even when running or charging; mythic power expenditure to reroll Stealth checks. At 1/2 speed, you can even senak in heavy armor or with tower shields and mythic power may eliminate the ACP for these temporarily. Once again, a damn cool feat for espionage/heist/etc.-campaigns and a prime candidate for houserule scavenging.

-Graceful Steal: Use both Str and Dex when using Steal to replace Sleight of Hand and the DC to notice it is higher; mythic power expenditure to reroll and roll surge die twice when using in conjunction, taking the better result. Escalation, basically.

-Startling Getaway: Lets you withdraw instead of making a move action, stacking with any other actions, but with the limit that you may not use other actions to move that round. Nice one!

-Street Smarts: Increase bonus, mythic power expenditure for being treated as though you rolled 20. Decent, if not too interesting.

-Walking Slight: Drive-by-Sleight-of-Hand, basically. You may also Sleight of Hand as a swift action, though at massive penalty…unless you expend mythic power, which can cancel said penalty. Love it!

While Jason Nelson and Alex Riggs do have a few less interesting upgrades herein, this installment of mythic minis does constitute one I’d consider obligatory: There are several feats herein that basically should be considered to be must-hae amazing for any espionage/stealth/intrigue-campaign. Beyond that, one could consider several of them to frankly be amazing scavenging potential for houserules, thus surpassing the tight focus of the product series. In short: This is a damn cool pdf, even if you don’t use mythic rules and just look for concise rules to scavenge. 5 stars + seal of approval.

You can get this cool mythic mini here on OBS!
Endzeitgeist out.