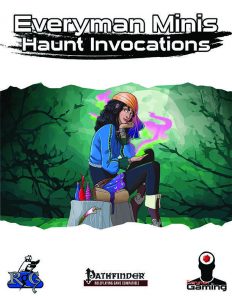 This Everyman Mini clocks in at 8 pages, 1 page front cover, 1 page editorial, 1 page advertisement, 2 ages of SRD, leaving us with 3 pages of content, so let’s take a look!

Okay, so the basic premise here would be centered around the Phantasmal Invitation feat: As a full-round action that provokes attacks of opportunity, you can create an invited haunt in any space you are or that you threaten. You do not accidentally trigger these haunts, but may remotely trigger them as a standard action while within 30 ft. of them and while the haunts can detect you. Invited haunts last for a number of hours equal to your CL or until triggered, whichever happens first. They can always attempt saves against effects that deal damage to them, with a bonus equal to CL plus your highest mental ability score.

Now, the feat requires nongood alignment as well as the ability to cast psychic spells and a character level of at least 3rd. You select a haunt and get a convocation reservoir equal to your highest mental attribute modifier. Generating an invited haunt costs one of these points and CL is equal to that of the psychic spellcasting class. The reservoir replenishes after 8 hours of rest, which, however, need not be consecutive. Cool: Characters with arcane school (necromancy), bone mystery, aether or dream elemental focus, patron spells, undead bloodline etc. may also take this feat. It may be taken multiple times, increasing convocation points by 1 each time and nets you an additional haunt.

The alignment of haunts matches your own and they, as a default, occupy a 5-foot square. Their CL is equal to the one of the character that made them and the Perception check to notice them is 10 + ½ the creator’s CL + spellcasting modifier. They have CL HP and are, per default, triggered by proximity and do not reset as a standard. Their effects are instantaneous or last 1 round and save DC, if any, is 10 + ½ CL + key ability modifier. Purely aesthetic hiccup: The formulae for Notice and saves are different. Fully functional, though, so consider this a nitpick and move on.

A total of 7 such invited haunts are provided: Bloody hands cause physical damage /type is chosen upon inviting the haunt); cold spots cause cold damage, Ref for half. Disfiguring fingers attempt to dirty trick foes (and yes, they benefit from your enhancements!); feast of vermin causes Con damage on a failed save; grave mist penalizes a physical attribute of your choice for a few rounds on a failed save; summon apparition generates a Cr 1/3 commoner, expert or warrior that shares HP with the haunt; unholy power, finally, deals negative energy damage, Will save to halve.

Here’s the thing: We get an additional feat: Shape Invocation: It adds +1 to the convocation reservoir and lets you choose one of no less than 9 (!!) options: These allow you to *REALLY* customize the haunt: Make it free-roaming, item-bund, latent…or invoke it faster. Or fuse two haunts. Invoke at range, provide resets, increase DCs and spaces…and you may grant haunts weaknesses, reducing their costs! Damage-increase is also included. Very minor nitpick: It’s obvious from context that the feat should be available multiple times for the taking, but the usual Special line is not there. Considering the vast amount of options with their different costs, I frankly don’t care about this cosmetic lapse.

Editing and formatting are top-notch on a formal and rules-language level, with only nitpicks of a cosmetic nature available to criticize. Layout adheres to Everyman Gaming’s two-column b/w-standard and the full-color artwork is nice. The pdf has no bookmarks, but needs none.

Clinton Boomer is a frickin’ BEAST. This DIY-haunt-engine is amazing and coincidentally, works pretty much akin to one I’ve been using in homebrews. It is elegant, easy to grasp, does not become OP, oozes flavor and adds neat tricks and versatility to the character. The rules are crisp, concise and manage to juggle the complexity of the subject matter in an admirable way. My only true gripe here would be that I so want MORE! The haunts are cool, but the concept could easily carry a regular full-length supplement. Still, this ranks as a superb example of how cool this series can be. 5 stars + seal of approval, given sans hesitation. Can we get a sequel? Please?

You can get these amazing, flavorful haunt-creating options here on OBS!