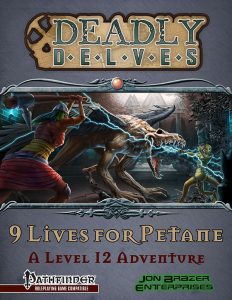 This installment of the Deadly Delves-series clocks in at 41 pages, 1 page front cover, 1 page editorial, 2 pages of advertisement, 4 pages of SRD, 1 page back cover, leaving us with 32 pages of content, so let’s take a look!

This review was moved up as a prioritized review in my reviewing queue at the request of my patreons.

This is an adventure-review, and as such, it contains copious amounts of SPOILERS. Potential players should jump ahead to the conclusion.

All right, only GMs around? Great! So, in ancient times, the city-state of Khys arose, rules by catfolk, all under the auspice of the deity Heshatta, known as the Tomb Dancer; a goddess of limitless curiosity, amoral explorations and the unearthing of forbidden truths. Her high priests crafted the amulet of nine lives to honor her most powerful gift. When human barbarians destroyed her city-state, the deity sowed the lands of the dead with her living children, so that whenever death’s doors opened, the dead would not return alone. Ages pass by, and in a remote barony, Markail Petane, last of his bloodline, was lost at sea. His widow has a serious issue: The land is made temperate courtesy of the fairwind spire, which is tied to the bloodline of Petane; without an heir, she can’t extend the growing season, which will wreck the economy, preventing trade with dwarven allies – a chain reaction.

Growing season is still around, but ultimately, it will not last long enough. Thus, she sent her niece, a historian named Adene Corvuth, to procure a diamond for true resurrection, but neither diamond, nor scroll could be found…but the sage did find the amulet! Thus, the plan gestated to summon the mighty, long lost general Ourys Petane from the dead…but neither baroness, nor sage did know that the amulet is still cursed… If that does not work, story-wise for your game, you’ll be happy to note that the pdf does come with a variety of nice suggestions/hooks to customize the adventure. It should also be noted that there is an alternative: The bride would much rather have handsome and kind Akouryn returned from the dead, but while he may be able to use the spire as well…wouldn’t the hero of old make more sense? Or should the PCs listen to Adene’s desires? Interesting conundrum there, particularly if the heroes return with both champions of the house…And whether Akouryn, a young, adventurous fellow, wants to tie the knot is yet another question.

The PCs are tasked to find the body of Ourys Petane in the Tomb of Valor, devoted to erstwhile heroes of light in the Orcwall wars. The set-up of the briefing of the adventurers comes with serious details, including rationale why the baroness doesn’t wish to return her husband from the dead instead. Similarly, the NPCs, while trusting, are not fools and don’t just send the amulet alongside the PCs sans safety precautions. The transition to the tomb features random encounters, should you choose to include them.

Okay, this is where the module becomes awesome, but in a rather unique manner: You see, the crypts per se are a place of goodness, but they have, unbeknown to the Petanes, been taken over by a powerful demon cult, including a shemhazian demon. The amulet in the PC’s hands does make it possible for them to return up to 9 people to life, including the long lost heroes of ancient times, which can obviously act as a great plot-device for GMs to provide potent tools, new mechanics etc. at a late stage in the campaign. The secrets had just died with the hero in question! However, the amulet is cursed, and as such, it does have its price: Whenever it is used, the catfolk of the long-gone deity return as well – and for each of the resurrections, another array of fully statted champions of progressive power are provided. And yes, some of these include psionic characters! (For campaigns sans psionics, the pdf has enough statblocks otherwise to replace these fellows, just fyi.)

Anyways, the exploration of the fully mapped dungeon is interesting in that the PCs have a super potent tool…and may well need it. The builds employed for adversaries are diverse, deadly and should provide sufficient challenges for even the high-level PCs that will tackle this dungeon. The villains/foes called forth by the demon cult deserve special mention, as e.g. ghost clerics, graveknight bloodragers and ghoul soulknives make for deadly foes to challenge PCs, combining races, classes and class options in sufficiently potent combinations. We also get quite a few unique traps and terrain hazards to make the respective environments interesting.

In short: Between the dungeon exploration the threats that stem from use of the amulet, and the potent opposition, the PCs will have their hands full! As a sidenote: The deities assumed here are the Aesir, which means that this module can be smoothly and pretty seamlessly integrated into Nose/Northern-themed campaigns – replace Baron with Jarl and there we go. The module does justice to the “deadly” aspect of the series’ title – the dungeon is challenging indeed, and degrees of success are possible: Fully clearing the dungeon is a wholly different task than just getting out with a resurrected heir…and beyond new, demonic foes, the PCs may have inadvertently raised a long-forgotten deity and her deadly servants from the slumber of aeons – in any way, the module sports ample of adventuring opportunities far beyond the confines of these pages.

Editing and formatting are very good on a formal and rules-language level. Layout adheres to the 2-column full-color standard of the series and the pdf comes fully bookmarked for your convenience. The pdf sports full-color, original artworks, which is rather nice. The cartography of the dungeon is full-color, pretty neat and the pdf comes with a second pdf that contains player-friendly versions of the maps – two, in fact! One with details on the maps, and one without them! You basically get your choice of the level of detail of the player maps, which is amazing – after all, there’s a chance that the PCs can find out about the dungeon layout before. Hand them the detail-less version. Then, whenever they explore a room, cut up the detailed version of the room and superimpose on the map, showing the magic circles, blood spatters and pillars, etc. Huge kudos for going the extra mile for maximum convenience there!

I know Christen N. Sowards primarily as an author of crunch: The master of Lost Spheres Publishing knows how to create interesting rules that have a very strong tie-in to storytelling. As such, I wasn’t surprised to see this adventure sport pretty interesting and challenging adversaries. What did surprise me, though, was how well this adventure played. This is a dungeon that works better in play than on paper, and the tie-in with the easily replaced divine angles, demons and ancient cultures can make this work within the context of a ton of different settings; the catfolk angle would make this, for example, a natural tie in for Midgard’s Southlands, connecting north and south. So yeah, the module ties in pretty seamlessly with most common campaigns.

The amulet, as a powerful angle, can provide a helpful change of pace for high-powered games and potentially provide a cool angle to go further planar.

Beyond the stats and mechanical aspects, this module, as a whole, makes for one of the few rewarding high-level modules out there. All in all, this one does not necessarily reinvent the wheel, but doesn’t have to. It is a cool, interesting module that can, if you choose, provide a great transition towards the world of high-level gaming. My final verdict will clock in at 5 stars + seal of approval.