What Lies Beyond Reason #3: From the Ashes (5e)

What Lies Beyond Reason #3: From the Ashes (5e) 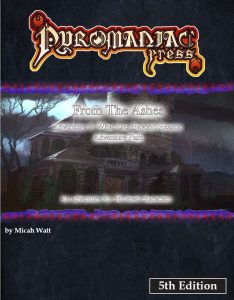 The third installment of the What Lies Beyond Reason AP clocks in at 72 pages, 1 page front cover, 1 page editorial, 1 page KS-thanks, 1 page ToC, 1 page SRD, 1 page back cover, leaving us with 66 pages of content, so let’s take a look!

This review was moved up in my review-queue due to me receiving a print copy in exchange for a fair and honest review.

First things first: As before, we receive scaling information, namely the required modifications to run this for 5th level characters instead of the 6th-level default. The pdf includes pregens.

All right, so Damian’s cryptic words at the end of module #2 should bring the PCs to the scorched ruins of his once noble family – unbeknown to anyone, the taint of the Machine has sent his family into the tragic downward spiral that gave rise to his obsession, but the PCs will find out how horrid this haunted place has become. Is Damian a bad guy? This adventure provides the answer, as the PCs explore the massive manor grounds, situated in the noble’s district before the city’s gates in a freeform horror sandbox.

Basically, you have the massive manor grounds and while the PCs explore this place, direct and indirect storytelling will allow them to piece together Damian’s background story – a tale of woe, of a father gone missing abroad, a mother spiraling into drug-dependency and an abusive stepfather, a monster who covertly hunted humans, one that was ultimately stopped by Damian.

As the PCs explore the manor grounds, they’ll bear witness, through cinematic haunts (think of these as supernatural hauntings/echoes) the tragic past of Damian, how his family’s downfall came to be, how his illegitimate daughter, whom he loved with all his heart, was slain in a horrid accident that unleashed his sorcerous powers…and how he came to understand the evil festering in Anduria…in short, it shows how a good man can come to employ the horrific methods he was employing in module #2.

Oh, and it is structurally the best module by Pyromaniac Press – in fact, it may very well be one of the best haunted house modules I have read in a long while. You see, this behaves, in a way, like the games of the Clocktower series or Haunting Ground – the grounds are haunted by a basically unbeatable monster, a horrid amalgamation of the souls slain here. This monster can only be hurt by using items that meant something to the constituent souls…and figuring that out is part of the challenge. The M is encouraged to use this monster to put pressure on the PCs, alleviate lulls, etc. – and the suggestions included make this very cinematic. oh, and fret not: The thing is SLOW and DUMB…but about as inexorable as the frickin’ Terminator. PCs are encourages by the presence of this threat to alternate between exploration and running, lulls and frantic activity…and from the OTHER threats here to the haunts, all those small clues they can gather can be pieced together to ultimately stop this thing. This makes the module behave in a different way than most and achieves, in combination with Micah Watt’s great rose and differentiated character-portrayal, to generate an atmosphere not unlike that of a great survival horror adventure.

…oh, and have I mentioned that the PCs will sooner or later find the breach in the cellar, which will lead to strange subterranean caverns, where dark folk (and yes, dear 5E-GMs – these have been converted for your perusal!) are worshipping an even stranger manta ray-like humanoid…and ultimately, find a strange keystone, whose mere presence seems to generate fugue states…though, at least for now, its wards seem to hold…placed by Damian…mind you…so ultimately, the module, when run successfully, should leave the PCs conflicted about Damian…and seriously contemplate redemption for the man…

There is one item that needs to die a fiery death – an infinite healing-granting parasite, which, while sporting a creepy imagery, is not something that makes any sense to me within the context of this AP. Doubly so in 5E, which values healing higher. Srsly, broken, needs to die. Still, that’s one item and a limit can be added relatively easily. On the plus-side: If you’re a fan of Rusted Iron Games’ Deadly Gardens-series, you’ll appreciate the crossover options included herein.

Editing is very good, I noticed no serious accumulation of issues. Formatting of statblocks etc. does sport some deviations from the standard, though these are mostly aesthetic. Layout adheres to a really nice two-column full-color standard and the module sports a lot of amazing, gorgeous full-color artworks. The module does come with a printer-friendly version, just fyi. The pdf also comes with amazing full-color maps, and excellent full-color player-friendly high-res maps are included in the deal for VTT-users and GMs like yours truly who can’t draw. The pdf version comes fully bookmarked for your convenience. The softcover is nice and a bit darker than the pdf, which acts to the module’s benefit as far as I’m concerned.

So, I admittedly love the genre. Pathfinder #2 made me stick with the Pathfinder modules back in the day. That being said, this also means that I have read a metric TON of haunted house modules and this is, frankly, one of the best I have read in a long, long while. You see, a haunted house requires a) detail, b) threats and c) above all, tragedy that you can empathize with. This module delivers all of these in spades. In fact, it could be called the pay-off module for what has gone before; up to this module, we have been setting the stage in various ways – for the AP, the city, the NPCs…and this is where the pay-off begins. And, OH BOY does it hit hard! The story and portrayal of characters is amazing, the atmosphere genuinely creepy. The plot-device monster and various ways for the PCs to defeat it is genius and manages to ramp up the tension really well.- The use of cut-scene-haunts, direct and indirect storytelling all conspire to make this module a really impressive, amazing experience that even jaded ole’ me enjoyed.

In short: Micah Watt brilliantly showcases his strengths as an author here and the passion is obvious on every page. Ismael Alvarez has done a nice job in the conversion as well – though I wished he had nerfed the broken parasite accordingly – it is even worse in 5E. As before, the formatting of the statblocks has some minor, aesthetic hiccups…but this should not deter you from getting this. This module is amazing, cool and while the 5E-version is slightly inferior to the PFRPG-version, it’s not by much – this still is a glorious haunted house module, well worth of 5 stars + seal of approval, in spite of the minor hiccups. If this is what we can expect from the AP, consider me stoked for more!!