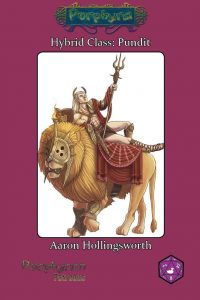 The pundit is a hybrid class of cavalier and wizard, gaining d8 HD, 2 + Int skills per level, ¾ BAB-progression and Will-saves as well as simple and martial weapon proficiency and light armor proficiency. The pundit may cast arcane spells drawn from the class in light armor sans chance of spell failure. The hybrid class gets full casting progression of up to 9th level, with Intelligence as the governing spellcasting attribute, spells drawn from the wizard list. They may substitute Draconic for one of their starting languages and employ spellbooks. However, the spell selection is limited by the authority chosen. I’ll return to these in a bit. The class begins play with a combat trained mount with Light Armor Proficiency. This mount may be replaced for free after 1 week, but it only gains link, evasion, devotion, etc. upon the pundit gaining the next level.

The class also begins play with a clout pool equal to 3 + ½ class level + Charisma modifier, replenishing after rests. As a swift action, the pundit may spend a clout point to gain a morale bonus equal to Charisma modifier to all melee attacks, CMBs and damage rolls. Authorities chosen also have uses for clout-based abilities. At 5th level, as a full-round action that provokes attacks of opportunity, the pundit may expend an unused spell slot, gaining clout points equal to that spell’s level, though clout may not exceed the maximum daily allotment. This may be used 1/day, +17day at 10th level. At this level, the ability may be used as a standard action and no longer provokes attacks of opportunity. Also at this level, the pundit may expend 1 clout point as part of casting a spell to enhance the DC by 1. The capstone doubles all skill modifiers to Intelligence and Charisma based skill checks while mounted. Additionally, targets critically hit by a mounted pundit must make a Will-save versus 10 + class level. (so…30.) or become stunned for 1d4 rounds, staggered on a successful save.

Now, I mentioned authorities: 9 different authorities are provided, and they work basically analogue to the cavalier’s orders: 1st, 4th, 8th, 12th and 16th level provide a linear array of abilities granted by the authority. An authority expands the class skill list by 2 skills, with one at +1/2 class level bonus. The authority also governs the type of spellcasting the pundit may have: Each authority is assigned two schools, and the pundit may only learn spells from those schools. Arcane buckler nets abjuration and universal, bone axe necromancy and universal…you get the idea. The authority of hidden truths is unique here: Any illusion cast with a duration of concentration retains its effects for ½ class level rounds after ceasing concentration. Additionally, the 20th level pundit with this authority may make such an illusion permanent, with only one such permanent illusion in place at any given time.

These authorities further enhance the uses of clout: The authority of the arcane buckler, for example, nets you an additional morale bonus versus a single target if that target has made an attack against another target…which makes no sense, since clout only works for a round, unlike challenge…so how do you determine whether or not the bonus applies? Weird. The abjuration authority nets scaling resistance to en energy type you can choose each day anew. Energy types available are not listed. A deflective aura and limited damage conversion to non-lethal damage. The 8th level nets a shield versus energy types. ALL OF THEM. This is basically a 3 x class level hit point shield versus energy attacks. Again, all of them. Yes, including RAW sonic, negative energy and force. An improved Stand Still and at 16th level, the option to immediate action move and attack, but at the cost of being staggered in the next round, complement this one.

The necromancy authority nets Command and Turn Undead, with a Cha-governed save, fear-inducing touch, better Intimidate, Critical Focus and lifesight, as well as attacks versus foes attacking allies via AoO and with a +2 bonus. The clout ability is problematic: “Whenever the pundit uses a clout point to successfully attack a creature whose kind she has encountered in the past 24 hours…” What constitutes “encountered” for the purpose of this ability? Defeating a target? Killing it? No idea. What does “kind” mean? Subtype? Nationality? Class? Nonfunctional.

The clout ability of the enchanted rose allows the pundit to offer terms of surrender as a standard action, but nets further benefits if the target then declines these. Okay, cool. For how long? Just for the activation of one clout? Then it does nothing, since clout only lasts a round. Many of these abilities clearly have been designed for duration-based abilities or permanent ones, not for point-based, short-burst boosts, and the design-ambiguities and issues when you prod them, alas, do show that. We also can find designs like high-level competing attack rolls (still consider them wonky). That being said, apart from the clout-hiccups, the rest of the abilities provided by the respective authorities tend to gravitate towards the more interesting angle, and rules language is better than quite a few of these hybrid classes.

The pdf includes an archetype, the sigil rider, who begins play with a more powerful mount that is kept in place by negative levels that may not be removed. Higher levels yield better mounts. Since this only replaces high horse, it’d be stupid not to take it after 2nd level. This one really need to cost the class more. The pdf includes 3 new feats:+2 clout, +2 daily uses of an authority power usable 3 +Int mod per day….and a feat that nets you access to a WHOLE NEW SCHOOL. This is bound to be a must have feat. The pdf comes with 10 types of favored class options, which diverge in presentation from the standards and are all assigned to multiple races.

Editing and formatting are generally good on a formal level, though there are quite a few issues in the details of the rules-language. Layout adheres to a 1-column b/w-standard with purple highlights. The full color artwork is nice. The pdf comes fully bookmarked for your convenience.

Aaron Hollingsworth’s pundit is an interesting class – the combo of wizard and cavalier is interesting, but it also shows a couple of issues in its execution: Beyond the problems with quite a few of the clout abilities not having been properly translated from their challenge-origins, the class is very front heavy, providing a lot at 1st level. It also never addresses the vigorous motion/concentration issue, which makes casting while riding unreliable, to say the least. That being said, with a bit of tweaking I can see this fellow work as intended. My final verdict will clock in at 2.5 stars, rounded up for the purpose of this platform.

You can directly support Purple Duck Games here on patreon.