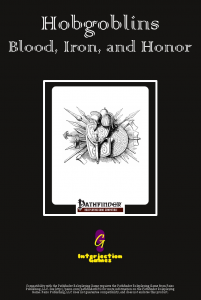 This supplement is 10 pages long, 1 page front cover, 1 page SRD, leaving us with 8 pages of new content to make hobgoblins more distinct, so let’s take a look, shall we?

Kicking off with a brief discussion on the nature of savage humanoids and hobgoblins in particular, we dive right into new class options to make these goblinoids feel more distinct, namely rather martially-themed archetypes, the first of which would be the Hobgoblin ensnarer, an archetype of the rogue base-class: All about setting snares fast to catch prey (and even not setting them off), the archetype per se is a nice idea – but ultimately a one-trick pony that falls to the wayside when compared to similar trap-centric full base-classes à la the Vauntguard. Also imho a lost chance to boost non-lethal damage-dealing capacities to further drive home the slavery aspect – but per se, for NPCs, an ok archetype.

Number two among the new archetypes would be the expeditious arcanist for the wizard, who may drastically cut preparation time in the morning and 1/day, as a full-round action that provokes an AoO and has you flat-footed for an additional round, exchange a  given spell they have prepared with another eligible one. At 13th level, the class gets an interesting ability that would allow it to prepare spells from scrolls – prepare, NOT LEARN, i.e. even though the arcanist doesn’t need his/her spellbook, to prepare the spells, they still have to be learned prior to preparation. The downside of this approach being, that while you may e.g. prepare 3 casts of shield from a shield-scroll, upon completion the scroll burns out.

Clerics may now opt to become Heart’s Blood Ritualists, who exchanges his granted domain abilities for  the ability to, as a full round action, kill dying creatures elaborately, netting allied hobgoblins a +1 luck bonus to atk and damage and penalizing all other creatures within 30 ft by the same amount. These bonuses scale up by further +1/-1 at 8th and 15th level and additionally, the ability consumes a channel energy attempt for the day. At 8th level, these ritualists are symbols and when reduced to below 0 hp, all allied hobgoblins within 30 ft get +ritualist’s cha-mod to damage for one round. Per se cool – but also expends channel energy , which usually would take a standard action. While I’m nitpicky here, the pdf ought to specify the type of action or lack thereof the ability’s activation takes – I assume no conscious effort of behalf of the ritualist, but still. Over all my favorite archetype so far, if a bit weak due to the VERY limited, not improving range of its signature abilities, which will fall behind comparable domain abilities in power at higher levels – especially since the ritualist gets no domain powers at all.

The Manstalker is an archetype for the ranger class and comes with one damn fine high-concept ability beyond its other option to track humanoids better: Concise rules for tasting and remembering blood and identifying humanoids by the taste of their blood – kudos, especially since mixed/boiled blood, dilutions by water/acid etc. are also part of the deal! Also, since they are specialized in killing intelligent humanoids, those dropping to or below Int 3 are more likely to survive an encounter with these nasty hunters. Nice idea there!

Fighters of the hobgoblin breed may now chose to become master tacticians: They can not only gain bonuses to stealth when ambushing, they may also explain their plans to allies to share the bonus and are also rather adept at using combat maneuvers… and honestly, I really like this archetype. It’s not particularly complex or Hobgoblinish, but it will make for a nice addition to NPC-bandit leaders everywhere. Barbarians may opt to become ruthless pursuers. These get bonus feats to Step up to foes and deal additional damage when stepping up to foes and dealing damage. As a cool drawback, the class loses one round of rage when failing to deal damage on the previous round. Rather cool!

Bards may now opt for the Singer of Triumphs Future-archetype, who may bind a weapon used to kill a foe and gains weapon focus with it and later enhance the weapon via stored spells and may add weapon enhancements to stored spells for the purpose of overcoming SR. Instead of fascination they get fear-countering camaraderie and instead of inspiring competence, they may grant a single ally fast healing. Bloodletting is also interesting, allowing a singer to focus on a foe – whenever the singer is dealt damage, the target also suffers a point of bleed damage that stacks with itself. At 18th level, singers may expand said ability to multiple targets. All in all, a nice take on a savage, more martial bard.

Clerics may also opt to become Thrallminders, specialists of the animation and control of lesser undead. At 3rd level and every 3 levels after that, they also may opt to learn a ritual that takes 10 minutes to perform and has a fixed price in gold – a total of 8 such rituals are provided and they allow the thrallminder to enhance undead this way – from netting them fast healing to granting them craft skills. I noticed a glitch here, though – the thrallminder gets the command undead feat at 1st level, allowing the archetype to control undead. One of the rituals enhances opposed cha-checks to make undead do things – which is useless. Why? Because, admittedly confusing as it is the command undead feat is not based on the command undead spell, but rather on its more powerful big cousin, control undead, which does not require this opposed check, granting absolute control. Hence this particular feature is in need of revision – and it shows that the design intention isn’t 100% fulfilled – getting a SLA à la command undead (spell) as a bonus feat is weaker than the regular command undead feat. Also, the rituals are in addition to existing clerical powers and while the archetype is limited to only one domain, which needs to be death or the undead subdomain, that still feels a tad bit powerful, especially since clerics already are excellent necromancers…

We also get the new hobgoblin bloodline for sorcerers, who gets access to a barbarian’s rage (albeit with 3+cha mod rounds instead of 3+con-mod) and some melee-enhancing powers. I actually liked this combination of sorcerous powers and at least basic melee capabilities.

Interspersed throughout the pdf, we also get 6 racial feats, which allow hobgoblins to shrug off pacifying compulsions, provide cold resistance, a teamwork feat to show their discipline and +1 bleed damage.  There’s also a feat that allows you to extend racial exclusive benefits to allies of other races and a feat that allows you to be treated as a hobgoblin in addition to your regular parental races. The latter did strike me as perhaps more appropriately represented by a trait, though, whereas the former NEEDS a requirement that it ONLY works for hobgoblins – as written, it works for any race and with some of the rather powerful racial powers out there, that could become problematic – casting e.g. spells that would require scales to make sense in-game would now be open to non-scaled races etc. – a whole can of worms there…

Editing and formatting are very good, I didn’t notice any significant glitches. Layout adheres to Interjection Games’s easy to read, elegant 2-column b/w-standard and the pdf comes sans bookmarks, which at this length is still, though barely so, acceptable. Artwork is thematically fitting stock art – not of the humanoid, but of the elegant classic b/w-pictures kind.

This pdf has some really neat mechanics and concepts inside, concepts that should help you make hobgoblins feel more distinct – as such, in this endeavor, it works. And archetypes like the barbarian one, the sorc bloodline and the ambush specialist fighter are rather cool – if a bit tightly focused for my tastes. That being said, I’m NOT going to rate this pdf as if it were a player-supplement – if taken as such, the archetypes would feel too specific, too streamlined towards one particular end – in most cases, at least. As a DM’s toolbox to enhance hobgoblins in your campaign, the pdf works rather well and should make the race feel more distinct. That being said, there still are minor hick ups in here and while most archetypes have something going for them, others were not as compelling – as a DM-toolbox, I’d still consider this a 4 star file. Hence, my final verdict will clock in at 3.5 stars, rounded up if you use the pdf as a DM, rounded down when looking for fodder for PCs – since I think the former is closer to the design-intent, my review will round up for the purpose of this platform.

You can get this neat supplement and expand your hobgoblin’s arsenal here on OBS and here on d20pfsrd.com’s shop!